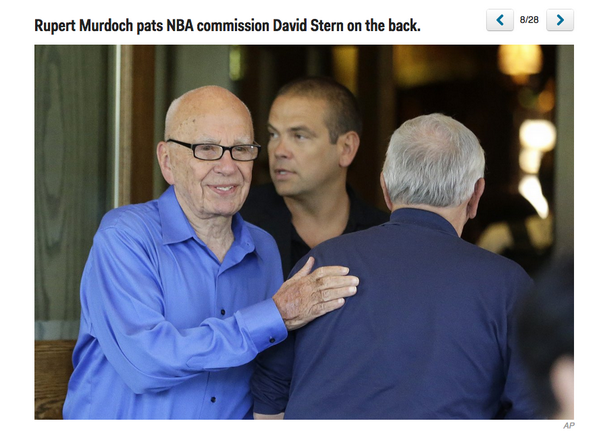 Did the window just close on Fox and NBC's ambitions to work with the NBA?

Mariana Rivera and David Stern both seem to have scripted their swan songs very nicely. While Rivera enjoys tributes and gifts at every away ballpark he visits , Stern is enjoying a final year victory lap that will likely culminate in new lucrative long term television deal extensions that will propel the NBA to new financial heights.

John Ourand initially broke the news on the earlier than anticipated extensions talks back in May. Subsequently I took a look at some of the questions surrounding the extensions talks and provided an anticipated timeline of how things would play out. My best guess at the time was that extensions with Turner and ESPN would be announced sometime in the late fall and my intrigue was centered around if the NBA would continue to have games on broadcast TV (ABC) and if perhaps the league would entertain the idea of having a small package carved out for either FS1 or NBCSN to bid on.

Fast forward to now and in light of recent events, I'd say you can surmise that the possibility of some major shift in NBA television rights is just not in the cards given what we've seen play out in regards to NASCAR television contracts.

Fox and FS1 added races to their package and added 2 years to a recent extension taking their rights agreement through 2024 (previously 2022).

NBC and NBCSN picked up the slack of ESPN and Turner deciding not to submit a formal bid by inking a 10 year $4.4 billion dollar deal. That's a bit heftier than Fox's nearly 4 billion dollar package.

With both companies on the hunt for programming to better compete with ESPN and now committing billions of dollars over the next decade plus, it seems rather unlikely that either entity would be able to outmuscle or outspend two legacy and well liked broadcast partners who just freed up some cash by ending their relationships with NASCAR.

It's not just that Turner and ESPN lost their NASCAR packages, but more so both didn't even feel compelled to submit bids during a bidding process that overlapped with NBA extension talks. From SBJ:

"Soon after the July 4 holiday, Turner’s David Levy called NASCAR’s Steve Herbst to say that Turner wasn’t going to make a formal bid for the NASCAR media rights that were available, sources said. The network had looked into expanding its six-race package for months, but it was in the middle of its lowest-rated season in 29 years of carrying the sport and ultimately decided that more NASCAR races weren’t worth the investment."

"ESPN had soured on the sport because of declining TV ratings, an aging fan base and a tough ad sales market. Just like Turner earlier in the week, ESPN’s John Skipper called NASCAR executives and told them not to expect a bid."

Hmmm. Almost if they knew they had something more pressing to spend their money on?

While it's possible NBCSN and FS1 could hypothetically bid on a newly created third NBA package, reading the tea leaves I think it's pretty unlikely either are in a financial position to make an aggressive move. Even more so, ESPN and Turner are already in the strong favorite incumbent positions, are even more entrenched with the ability to shift their NASCAR rights budget and deploy that capital to not only retain their packages with the NBA but potentially sweetening their deals to prevent the creation of a new package.

Turner and ESPN both now have some programming holes to fill without NASCAR and perhaps both companies would have opted not to retain NASCAR even without the NBA talks looming in the background. That said it seems both companies had a similar game plan to let NASCAR walk in preparation for locking down one of the biggest sports television assets for the rest of the decade and beyond.

If you're a fan of the NBA being a staple on ESPN and TNT, than it looks like the status quo is likely to continue for quite some time. Unfortunately that means we don't be hearing the return of Roundball Rock anytime soon.