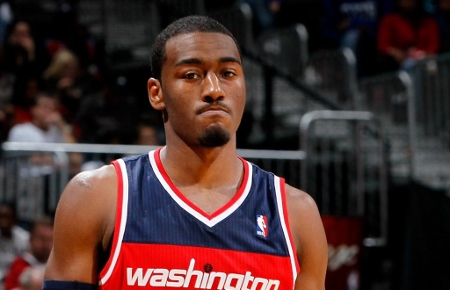 Jason Reid of the Washington Post wrote a column recently about Wizards PG John Wall and his tattoos.

The entire diatribe is beyond pointless and is among some of the worst sportswriting you will see in this day and age, but here are some excerpts:

Posing shirtless recently for an Instagram photo, Wall revealed several tattoos. Wall’s interest in body art is surprising, considering he previously said he did not have tattoos because of concerns over his image for marketing reasons. Many NBA players do have tattoos, and Wall isn’t breaking new ground in sharing his ink with fans through social media.

But not every player flip-flops on a topic in such a public way. Factor in that Wall is expected to receive a huge payday from the Wizards next month, and the timing of his tattoo revelation raises questions about his decision making. For a franchise with a history of backing the wrong players, that’s food for thought.

This isn’t about the merits of body art. Wall, 22, has the right to put whatever he wants on his body, and one of the advantages of youth is that you can reinvent yourself. As the face of the Wizards’ franchise, however, Wall is going to be scrutinized more than the last man on the bench. He’s always under the microscope.

Judging by his new look, Wall, who declined an interview request Monday through the team, might not be as concerned as he once was about appealing to a wide audience. In interviews before the 2010 draft, Wall made a point of presenting the type of clean-cut image teams want from college players to whom they’re considering giving millions of dollars.

This may not be about the merits of body art, but it IS about the merits about having nothing better to do than make up useless things to write about. Reid argues that LBJ, Rose, Durant, etc., are all marketable with their tattoos because they have proven themselves on the court, including playoff games.

This would seem to invalidate the entire point of Reid's article, but he somehow finds a way to soldier on. The marketability of players has NOTHING to do with body art. Attitude, yes, performance, you betcha, but talent and tattoos are not mutually exclusive.

I cannot believe that Reid’s main point is that Wall changing his mind about body art lends to him being untrustworthy, untalented and unmarketable. Has he been arrested? Has he done anything illegal? What is the freakin’ issue, dude?

Reid is competing with Colin Cowherd for the dumbest John Wall related rant in existence. You may or may not remember Cowherd’s rant over Wall’s doing the Dougie during his introduction to a game in 2010. The rant was so bad, I stopped listening to it 40-seconds in, and watched this instead:

Reid's column harkens back to David Whitley of Sporting News basically saying Colin Kaepernick was going to go to jail because he has tattoos.

"Approximately 98.7 percent of the inmates at California's state prison have tattoos. I don't know that as fact, but I've watched enough "Lockup" to know it's close to accurate…
NFL quarterback is the ultimate position of influence and responsibility. He is the CEO of a high-profile organization, and you don't want your CEO to look like he just got paroled."
Reid must have missed the national lambasting Whitley received for his equally misguided column. These comments are troubling for the following reasons:

Are they just saying this crap because their bored? Nothing better to do? Since when was it the sports columnist's job to play amateur psychologist? Whatever the reason, it is unnecessary, pointless and mean. If they're going to criticize players, at least make it over a worthwhile topic. Till then, we can look forward to Reid's next article about how Wall switching from Reebok to Adidas makes him a terrible leader in the locker room.