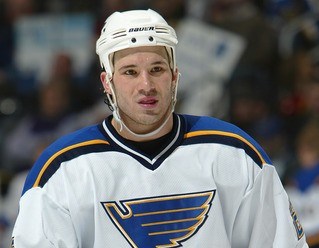 Why do pro athletes throw their careers away and commit thoughtless crimes? That's a question many people are asking as we all closely follow the Aaron Hernandez murder case and trial. As it turns out, it's also a question one former NHL player who was jailed for conspiracy to commit murder asked on Twitter.

Mike Danton was drafted by the New Jersey Devils in the 2000 NHL Entry Draft. He skated in just 19 games for the Devils before being traded to the St. Louis Blues. With the Blues he appeared in 68 games as the club was eliminated by the San Jose Sharks in 2004. Two days after the Blues were booted out of the playoffs, Danton was arrested for planning a murder. He tweeted this comment on the Hernandez case…

Danton's case is both fascinating and confusing. He pled guilty to hiring a hitman to murder his agent, David Frost. The murder never took place, but Danton was sentenced to seven and a half years in prison. That's not where the story ends. We'd need pages to explain the whole ordeal, so you can read up on the rest of the story on everyone's favorite site: Wikipedia. The case takes several twists and turns that need to be read to be believed.

Danton was granted parole in 2009 after revealing his murder plot was actually targeting his father, not his former agent.

Danton appears to have his life back on track. He's open about his life story, sharing specific details about the incident on his personal site. Danton is back in school and is working towards a double major in Psychology and (wait for it) Criminology. He's also back playing professional hockey. He skated in Austria during the 2011-12 season and in Slovakia in 2012-13. He still dreams of playing in the NHL.