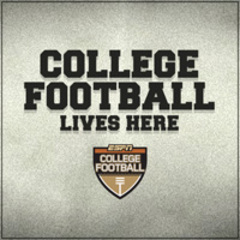 Like the complete and total nerd that I am, I eagerly anticipated yesterday's announcement of ESPN's college football announcer lineup for the coming year.  It doesn't quite get the same levels of praise as the network's soccer coverage, but the resources, quality, and depth of ESPN's college football coverage is quite impressive.  Then again, maybe I'm just in a good mood since there's no Pam Ward or Craig James in sight.

As far as changes go, ESPN has gone with the approach of "if it ain't broke don't fix it."  The only real differences are Rod Gilmore moving from Fridays to Saturdays to work with Bob Wischusen and Danny Kanell moving to Friday night primetime.  The Top 3 teams of Musburger/Herbstreit, Nessler/Blackledge, and Jones/Huard are all in place for ABC, ESPN, and ESPN2.  Rece Davis, Jesse Palmer, David Pollack, and Sam Ponder return for Thursday night football as well.  Here's the entire lineup: 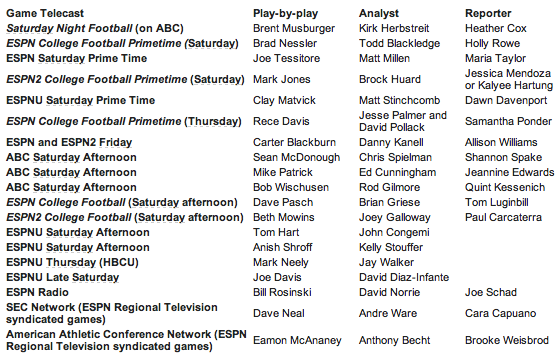 If there's two teams here that don't get enough credit nationally it's the early afternoon pairings of Sean McDonough and Chris Spielman and Dave Pasch and Brian Griese.  The lineup is stacked up and down the list and you're not going to find many better than Brent & Herbie as the voice of the BCS title game.

But we all know we're not looking towards what's going to happen with Alabama and Ohio State and Johnny Manziel this year.  It's all about whether or not Matt Millen will hold onto his Pammies title.  We're less than 3 weeks away from Year 7 of the Pammies!