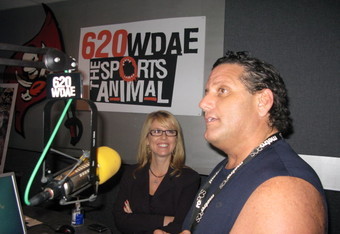 Dan Sileo has apparently learned nothing from his past mistakes.

After his former team, the Miami Hurricanes, were manhandled by Florida State 41-14, Sileo threw a hissy fit on Twitter at an FSU player and offered a $1,000 dollar bounty to anyone who would injure Devonta Freeman.

Sileo has since deleted the tweets, but CBSSports.com (via Tomahawk Nation) had the screen shots for us to see Sileo in all his deluded, self-righteous "glory." 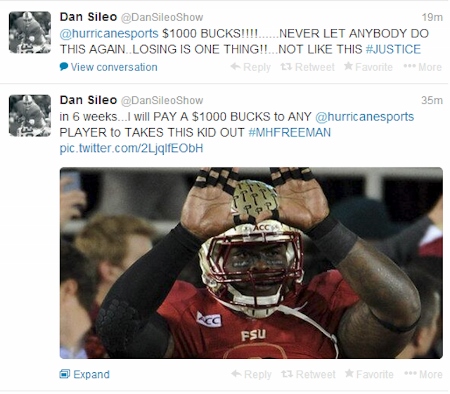 For some reason, I am reminded of a line from the original Mighty Ducks: "We can't even win when we cheat." For all his rage against a simple gesture, Sileo couldn't even get the player's name or picture correct as he tweeted a picture of the wrong FSU athlete.

His timeline right now is of course full of the empty, hollow gestures of apology that we're used to by now:

@hurricanesports @FSU_Football …..I take the tweet back…….I am PISSED at HIM…BUT in NO WAY did I mean that 1000….JUST a TWEET

But this one may be my favorite:

@ryanprasek I am….meant it as a JOKE than thats it..I see TONS of folks watch what i say….my mistake

If his past two firings have taught him nothing, he should at LEAST know that social media has led to his downfall more than once. Also, really – writing coherent sentences. He should try working on that.

The most incredible element to this story is that Sileo found another job after his sexist Twitter rant against Erin Andrews and being fired from WQAM earlier this year. (That was after being fired from another job for more highly controversial remarks.) Sileo curently works for 640 WMEM in South Florida, a station that deserves every ounce of the negative publicity they are going to get for bringing this foolishness upon themselves.

UPDATE: WMEN fired Sileo on Monday. His third firing since March 2012. Here's the statement from the station:

"As a result of Dan Sileo’s action on his personal Twitter account on November 3, 2013, WMEN has terminated his independent contractor relationship with the station. The ownership, staff, and management of WMEN 640 Sports do not condone his actions which have no place in sports"