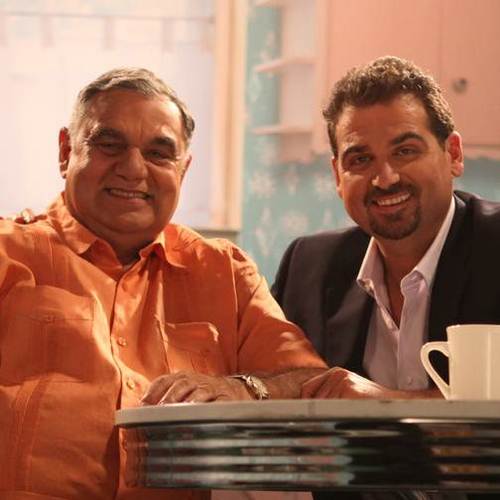 This weekend word got out that LeBron James received 119 of a possible 120 MVP votes, falling just short of becoming the first unanimous MVP in league history.  Immediately, the conversation turned to who the joker was that "robbed" James of the honor and possibly could have watched this season thinking LeBron was not the best and most valuable player in the league.

Le Batard's Sunday column in the Miami Herald began with this sentence:

"This is as redundant as it is obvious: LeBron James is the most valuable basketball player running and jumping and dribbling atop this globe."

And yet, in spite of those words and Le Batard's history of appreciation for James and the Heat, one joking reply from Le Batard to a Twitter follower saying he was the Carmelo Anthony voter spawned an angry mob full of virtual pitchforks aimed squarely at Le Batard.  Instead of saying it was a joke, Le Batard gleefully incited the mob even further, spamming his own timeline with 104 retweets which were all some iteration of this…

@lebatardshow you're as stupid as you are fat

Columns began appearing around the internet calling out Le Batard for being that guy.  He even tweeted screengrabs of texts from Colin Cowherd and Dan Patrick's radio shows hoping to talk to him about it.  There was only one slight issue with all of this of course…

Dan Le Batard does not have an MVP vote.

The lone MVP vote for Carmelo Anthony actually came from Gary Washburn of the Boston Globe, who in spite of the hysteria over the identity of the voter, outed himself in a Monday morning column.  Washburn's reasoning isn't all that offensive to logic and reason and is a reminder that sometimes people can have different opinions.  He just thinks Anthony means more to the Knicks:

"When I placed my NBA MVP vote a few weeks ago, I knew I would be in the minority. I knew LeBron James was the prohibitive favorite to win his fourth award because he unquestionably is the best player in the game.

I voted for Carmelo Anthony based on his importance to the New York Knicks, who, if you haven’t been paying attention the past decade, have failed to be relevant.

When the voting was announced Sunday afternoon, I was flabbergasted to learn I was the lone voter among 121 to not give LeBron a first-place vote, truly believing Anthony, Kevin Durant, Chris Paul, and perhaps even Kobe Bryant would snag a first-place vote or two.

Firstly, when I submitted my vote in mid-April, I had no idea I would be the only voter to leave LeBron out of first. This isn’t Mrs. Wilson’s class, I don’t walk around asking fellow sportswriters their answers to the US History quiz. I had no idea whom the writers were voting for, so this was no LeBron conspiracy.

Secondly, this isn’t the Best Player in the Game award, it’s the Most Valuable Player award, and I think what Anthony accomplished this season was worthy of my vote. He led the Knicks to their first division title in 19 years."

So what did we learn in all of this?  Normally, a media personality making themselves the story as Le Batard did is frowned upon.  In this case though, it was such a humorous prank on the extreme two percenters of sports fandom that its supreme annoyance is strangely admirable.  Anyone who's willing to retweet over 100 messages calling them fat, ugly, and stupid deserves some kind of credit.

We learned that Twitter is very much a crazy place and stories can definitely be ran with before any facts emerge whatsoever.

We learned that the semantical arguments over the word "valuable" may be one of the most pointless debates in all of sports and 119 out of 120 MVP votes is still pretty good.

We also learned that we take MVP votes way too seriously.