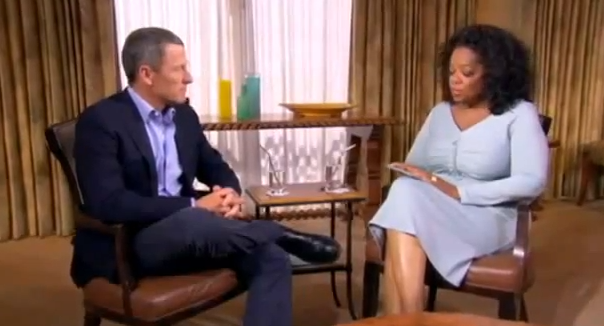 Part I of Lance Armstrong's interview with Oprah Winfrey finally aired Thursday night and it provided a window into the deep commitment Armstrong had to hiding the real truth behind his performance enhancing drug use.  Although Armstrong is hoping this interview will be the beginning to a public reclamation project, he likely has another thing coming as critics are out in full force after his lies were exposed in the interview.  Here's 5 Takeaways from one of the most highly talked about sports interviews ever…

When news broke that it would be Oprah Winfrey interviewing Lance Armstrong, there were fears it would resemble Winfrey's accommodating interview with Marion Jones.  Perhaps quite rightly, there were concerns Winfrey would deliver more softballs than your local slow pitch beer league.  When I think of tough interviewers, Oprah isn't the first name that comes to mind.  Nevertheless, she was strong in Thursday night's interview.

The beginning of the interview with a straight "Yes or No" rapid fire segment getting Armstrong on record admitting to doping was powerful.  Were there a couple opportunities for more detailed follow-up questions?  Of course, as there would be for anyone doing the interview.  But as much as Lance Armstrong likely hoped this would change his public perception, the one who I came out of the interview with a more favorable opinion of was actually Oprah.

2) The interview should have ran in one episode Tuesday night

Oprah and OWN were unlucky that the biggest mystery in sports the last decade was unveiled in the time between the taping and airing of the Lance Armstrong interview.  The Manti Te'o hoax took a lot of the steam out of Armstrong's interview, although ratings will still likely be huge.  In the 24/7 media cycle though, many forgot about Lance Armstrong after leaks began emerging immediately after the interview.  By the time we saw video of Lance Armstrong admitting to doping Thursday night just past 9 PM ET, it was old news.  Furthermore, I can imagine a significant portion of the audience feeling Thursday's portion was sufficient and choosing not to tune in Friday night for Part II – my interest in Lance's lies admittedly dragged after 90 minutes.  Had the interview aired in one 2 hour block Tuesday night, it would have better served the current media climate.

Did you really think Lance Armstrong scheduled this sitdown with Oprah because of some sort of epiphany that he had to cleanse his spirit and admit his wrongdoing?  Please.  Armstrong admitted doping for all 7 of his Tour de France victories, but he also claimed he's been clean since, saying "The last time I crossed that line was 2005."  Armstrong maintained he was clean in the 2009 and 2010 Tour de France.

Do you really believe that?  Or are those dates put forward by the Armstrong camp to help both his reduce his ban and/or aid him in possible legal trouble?  ESPN's Bonnie Ford wrote an excellent reaction column to the interview and wasn't buying this new line of defense for Armstrong for one second:

"It was desperate. And huge chunks of it ranged from disingenuous to unbelievable. There was far too much defiance and contradiction of evidence and abdication of responsibility to respond to in one column, although I will start by saying that I don't believe for a minute that he was clean in his comeback. And we've seen only half the footage from the Oprah Winfrey interview."

If Lance Armstrong expects America to believe he was clean after 2005 after lying for over a decade about using performance enhancing drugs, he's only lying to himself now.

4) Lance Armstrong painted the portrait of a soulless man

The one quote that I took away from Armstrong's interview with Oprah was about all the lawsuits, all the bullying, and all the lives that were ruined because Armstrong had to protect his lies.  When asked about suing Emma O'Reilly, Armstrong nonchalantly replied, "To be honest Oprah, we sued so many people… I'm sure we did."

Think about that.  Lance Armstrong lost track of the number of people he tried to destroy to protect his drug abuse.  He lost count.  These are real people who Armstrong attempted to vanquish, and yet to him, they were just a pawn in his sick, twisted game.  A meaningless pawn.  Do you really think he cared about the people he actually inspired along the way with his "humanitarian" efforts, or was that just the Queen in this game of chess?  At ESPN, Ford also recounted a story where Armstrong claimed his racing was "as legitimate as our cancer work."  Maybe it shouldn't be a surprise that Lance Armstrong would use a cancer charity to guilt people into believing him.

With regards to Betsy Andreu, Armstrong was evasive about Oprah's questioning.  He even laughed and tried to crack a joke, "I called you crazy, I called you a bitch, I called you all these things, but I never called you fat."

And in these quotes, Armstrong always appeared distant.  He never got emotional.  He never paused to reflect on his actions.  It looked like rehearsed regret.  This didn't look to be a man baring his soul for the world, but a man trying his best to regain control over an attempted "comeback."

5) The damage is now well and truly irreperable

After watching the Lance Armstrong interview, I see no way he makes any sort of comeback.  The damage is too much to overcome.

It's not that Lance Armstrong lied. Pete Rose lied. Marion Jones lied. Many others have lied.

It's not even that Lance Armstrong built his personal fame and fortune on those lies and those performance enhancing drugs. It's not that he inspired millions with a myth.

It's the people's lives Lance Armstrong ruined along the way.  That terrible reality is going to be his unforgiveable sin in the public's eye.