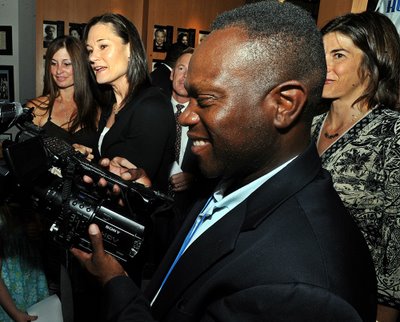 There are two types of emails I dread getting as Bloguin’s CEO. The first comes about every week from an ambitious high school student. I can usually decipher where it’s going in the first three words as they are the only emails that start with “Dear Mr. Koo.”

They explain their dream of being a sportswriter and pitch me on their enthusiasm and dedication along with some naive vision of a website they want to launch with Bloguin they think will be huge. Some of the visions are painful to read, but I’m sure we all had thousands of half baked thoughts at that age.

Companies like Bleacher Report have made a killing harvesting this group but unfortunately, the problem is from a writing ability standpoint there are few folks at this age who can rise above all the noise, attract and retain an audience. The enthusiasm is great and I wish them well, although part of me wants to paint a more realistic picture of what the path to success as a full time sportswriter looks like.

I was lucky in that sense as at the age of 18 and months away from going off to college, my cousin took me to dinner with a colleague of his at the San Jose Mercury News as a reward for helping him move out of his apartment. Both were Northwestern J-School grads. Upon hearing I was debating pursuing a career in sports journalism or business, they did what any print media employee would do: they passionately campaigned for me to NOT go into sports journalism or any type of journalism.

But their jobs were so cool, their stories so interesting, and personally they were adult versions of who I hoped to become one day. By the time our food came, I was over it. They had successfully and concisely explained the lay of the land to me (this was 2001 mind you) and the belief it was going to get progressively worse. Neither has worked for a newspaper since 2007.

This leads me to the second type of email I dread finding in my inbox. It’s from the other end of the spectrum. The unemployed sports media personality (print, radio, TV) who is now looking to find their way onto the web. They’ve heard I’m a good guy and have something going and want to learn more. Inevitably this conversation is a rough one to have on both sides. Currently bootstrapped (teaser hint hint), despite the progress of Bloguin there is no way we could ever hire some of these old media castoffs. It’s not that I devalue them, it just economically makes no sense at this point in time. They start digging about how much I can pay, taking a paycut, and promising to learn to tweet better and deliver tons of hits, but alas it’s just not meant to be.

Over time, I track how some of these folks are doing, hoping they’ve found solid footing. Unfortunately a lot of these good people never seem to get back in the game. Many have expressed to me some bitterness about their situations and rightfully so. Also, many of them have ridiculed some of the offers that have come their way. They see the evolving media landscape as an epic abomination that is only getting worse. They are unhappy about posts per day quotas by some web outfit they talked to, lack of health insurance or a 401k at a smaller paper, the need to write a blog or do a podcast instead of newspaper columns or TV/radio segments, etc. These are all things I’ve been told has prevented talented writers from getting back in the game on some level.

That’s where the disconnect lies. The 17 year old emailing me who I have to turn away is often willing to work for free to get their stuff out there via a credible sports media company. Seasoned journalists just don’t have that enthusiasm for the work anymore. That brings me to the interesting story of Vern Glenn.

For 99% of you, the name doesn’t ring a bell. Glenn joined KRON in 1990 and became quite a well known, popular sports personality in the Bay Area. KRON was NBC’s affiliate encompassing San Jose, San Francisco, and Oakland, which adds up to the country’s 5th largest television market. The 90’s were kind to NBC and their affiliates as shows like Seinfeld, Friends, and ER along with rights to the NBA, Olympics, MLB, and NFL pumped ratings that allowed affiliates to thrive with their own programming and local news. 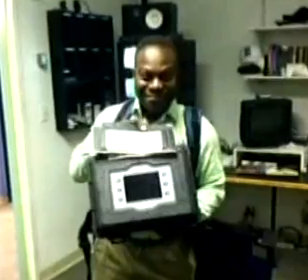 When on camera on the air live, Glenn was outfitted with this device

Glenn was the sports department’s #2 guy and was seen all over the area, always approachable and with a smile on his face. His segments were funny as he became known as Mr. Involvement because he would do features in which he’d put himself in the story in a comedic way.

With a large television market and at the top of local ratings, KRON sold for a record $820 million in 1999. No local affiliate had sold or has sold for a higher number since. That’s when things got hairy.

The Dot Com crash occurred, which was a brutal blow to all local media companies. Not too long after, in a high stakes game of chicken gone wrong, the new owners of KRON refused to give in to NBC’s demands for an extension of their affiliate status. NBC moved on and then partnered with Channel 11, a former WB affiliate, and KRON became independent. Just two years removed from being the the most expensive local television channel sold, KRON was set adrift as NBC doubled down with Channel 11 and acquired the affiliate outright. It was about this time that I went off to college and fell out of touch with the local sports media scene in the Bay Area.

To their credit, KRON’s news ratings held up pretty well given the lack of hit national programming bolstering ratings, but it wasn’t going to hold forever.

Budget cuts, layoffs, programming cuts, etc. For years that was the buzz from KRON and the growing star of Glenn wasn’t immune to it. The big names mostly left the network, presumably when their contracts expired. If you wanted to stay, you were going to have to do more to embrace the new “video journalist” style. This meant basically shooting and editing your own stories. More work, more bullshit, and less pay. Glenn’s Linkedin page explains it best:

“For the 1st 15 years, I was the weekend sports anchor, weekday sports reporter. Then KRON put a camera and a laptop in my hands. Since 2005, I have added photographer and editor to my load of responsibilities.”

I don’t know the economics of Glenn’s former relationship with KRON and why he didn’t look to move on as I’d imagine he had options. Perhaps he wanted to make it all the way back to the top of the mountain rather than finding a smaller hill to climb somewhere else in a smaller market.

With literally no national lead-in programming to get people in the door, KRON continued to languish. In 2009 the parent company filed for bankruptcy, mostly due to the state of affairs with KRON, who had essentially fallen off the map. Around this time, Glenn realized he had a knack for producing the video journalism thing and started his own video production company. For a guy who was the toast of the town not too long ago, Glenn was now producing videos for weddings, corporate events, recruiting highlight videos, and highlights of childrens sports teams.

As eluded in his sendoff segment from KRON, Glenn’s story wasn’t lost as symbolic of the shifting media landscape. Below is a transcript from the video at the bottom of this post starting about one minute in.

Gary Radnich: I think the thing I admire most about you and I never told you this, but all of a sudden… the business…. KRON started it when they lost NBC and all of the stations are following up where you can have a cameraman also be on the air. A two for one deal. They call them a “video journalist” which is a nice way of saying, two for one….. we can fire someone. That’s just the way it is and the business took on a burn em out let em go style to it.

Glenn: It’s not for everyone but instead of complaining about it, what was I going to do? I had to embrace it and move forward.

Radnich: I always admired you because you could easily say each time you went out people are looking around saying “Look what happened to Vern.”

Glenn: Ohhh, I drew the looks….”Oh poor Vern,” from the other guys but what was I going to do?

As you may have just gleaned, Glenn is moving on from KRON. He’s going to KPIX, the local CBS affiliate. He’ll have more support, a bigger paycheck, more viewers (many of whom may have forgot about him), and the mandate to bring the best practices of video journalism to KPIX to some green talent.

So there we are, with Vern Glenn’s first go-round with KPIX. Mr. Involvement looked HAP-PY to be there.

Personally, I find Glenn’s odyssey extremely refreshing. Yes, I do understand he was never actually unemployed, but I’d imagine working for a company going through bankruptcy while producing videos of an Under 11 championship soccer game between The Flames vs. The Unreal is not exactly thriving either.

The more people succeed and the more comfortable they get to a certain way of thinking and operating, the more difficult change becomes. Old dogs and new tricks have never gone together well. Glenn was as big time as you could get on a local level. He then got a laptop and a camera and probably a pay-cut. He kept going. He probably got another pay-cut along the way and started making videos for anyone who would have him. I’m sure some people hired him not knowing who he was. While working events people would say at their kids’ sporting games, “Aren’t you Vern Glenn? Man I used to LOVE you on KRON. It’d be great to see you back on television.”

Well in the words of LL Cool J, “Don’t call it a comeback, I’ve been here for years.”

The high school student who wants to be a sportswriter and the bitter unemployed traditional media castoff can both learn something from Vern Glenn. Stay true to your passion and embrace the grind. Sometimes it pays off in the long run.