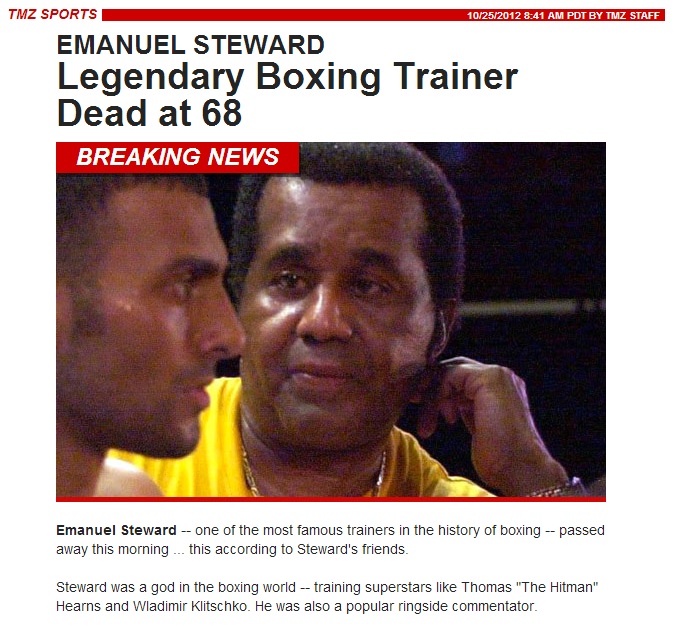 Earlier this morning on TMZ, a report surfaced that spread like wildfire across the internet that legendary boxing trainer Emanuel Steward had passed away. One problem: the report wasn't true, and Steward is still alive. TMZ quickly pulled the story down (but it still lives on the internet), and a statement released by his sister smacked down the people who created the report of his death in swift fashion.

"You can tell folks that he is alive and being treated by some of the best experts in the world. The Steward family is dismayed and greatly disheartened and disappointed that during this personally challenging time, people would callously and thoughtlessly run wild with untrue statements in order to garner their '15 minutes of fame.'

"Where is the moral compass of those seeking to capitalize on this situation? Does anybody take the time to check out the facts anymore?

"Many of those issuing reckless statements have our phone numbers as well as Emanuel's office number and yet, they haven't called, just issued statements that are terrorizing Emanuel's children, siblings and relatives that aren't able to be here at the hospital.

"SHAME ON THEM! He has feelings and we, his family, have feelings. Consider that and give us our privacy to help our loved ones."

This isn't the first time we've come across a situation like this. Back in January, it was reported by every mass media outlet online that Joe Paterno had died after a report from Onward State on Saturday night. Paterno didn't end up passing away until Sunday morning, and many people ended up with egg on their faces. We immortalized this in our Worst Tweets of 2012 feature last week.

The statement by Steward's sister is incredibly damning towards TMZ and other media outlets because of her claim of them having contact information for several people close to Steward. The fact that no one even went about confirming the story is a little chilling in the broad scale of journalism, and once again is enforcing the mentality that "it's better to be right than to be first."

Honestly, I don't expect a site like TMZ to be a bastion of journalistic integrity, but other outlets really should do better with their fact-checking. Misreporting a death is pretty much the worst thing that can fall upon you as a journalist.

Update: Later Thursday afternoon, Steward sadly did pass away at 2:46 PM ET and it was confirmed.