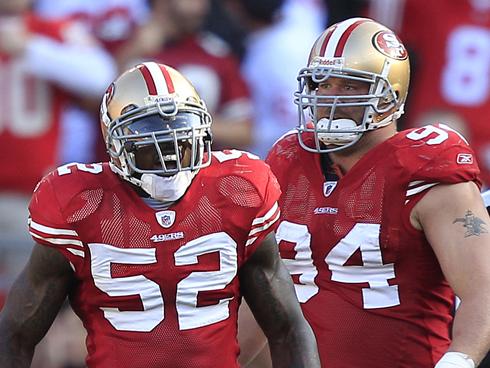 Ratings for the NFL Divisional playoffs are in, and like last week’s Wild Card games, some interesting trends have emerged.

The Packers-Giants game drew the highest amount of viewers EVER for a Divisional game, with 45.1 million viewers and a 25.3 rating, the highest rating since 1997 (Cowboys vs….Panthers? Yes, Panthers). The second highest amount of viewers for a game was not in fact Tim Tebow’s Broncos against Tom Brady’s Patriots, but the thrilling Niners-Saints game from Saturday afternoon with 35.6 million viewers. While the Broncos-Patriots game was third of the four games in total viewers, both Saturday games were the highest rated divisional games in their timeslots in history. Bringing up the rear in the playoff games was the Ravens-Texans game, with 31 million viewers.

What does all of this actually tell us, though? The fact that the heavily hyped Tebow-Brady showdown, which was a stinker of a game, finished third out of the four games in the ratings shows that fans care more about the actual on-field product as opposed to the hype behind it. A lot of fans could have tuned in at the beginning of the game, saw it begin to get out of hand, and tuned out. I know that’s what I did. Meanwhile, the Saints-Niners game with its crazy finish drew in more viewers late as Twitter exploded with reactions to the multiple lead changes in the fourth quarter.

But the big story is the record-breaking ratings for the 15-1 Packers versus the Giants, who played their way into the playoffs on the final week and put on a minimally entertaining game in the Wild Card round against the Falcons. Because of the story of the Packers trying to repeat, and the size of the New York media market, more eyeballs were drawn to that game than there probably should have. So maybe there is something to the story behind the game… but only when on-field performance warrants it. While the Patriots-Broncos game was a blowout at halftime, the Packers and Giants game was tight, and the lure of the upset was alive and well the entire time. Even if it’s a blowout, you don’t turn off an upset. This is what happened in this game…

Another element to look at is the overall ratings for all of the games. The previous record high in viewers for a divisional game was last year, when the Jets upset the Patriots and 43.5 million viewers tuned in. The Packers-Giants game from this year was a modest 3% increase, but still an increase. Ironically (or not), both games involved the New York market. This was also the second straight year in which the four games averaged over 30 million viewers, with each game clearing that hurdle on its own. Ratings increase for each round, and each round of this year’s playoffs have set records, so it’s not out of the realm of possibility to think that more records will fall during conference championship weekend.

Or, maybe not. What’s the hook for either game? You have the Patriots and Ravens, who are in the playoffs every year in a matchup that doesn’t quite seem fresh. Then in the NFC, it’s the Niners and Giants, neither of whom really lights up the scoreboard or is laden with superstars although you do have the New York market again. In fact, 49ers-Giants seems like a bit of a letdown after everyone was looking forward to another Packers-Saints shootout. Three of the most marketable players in the playoffs were eliminated this past weekend, with Tom Brady the most marketable guy left. In fact, he might be the ONLY marketable guy left. Eli Manning will forever be known as “the other Manning.” Alex Smith was labeled a bust before last season as the number one overall pick who couldn’t live up to expectations. And then there’s Joe Flacco, who has a punishing defense on his side that gets most of the credit for his team’s success and is known more for his erratic quarterback play than anything.

The NFL has hit home runs on its first two weekends of the playoffs due in part to compelling storylines. In the third weekend, the storylines are largely gone. If the NFL wants more record ratings, they’re going to need to have the on-field action do the talking for them.