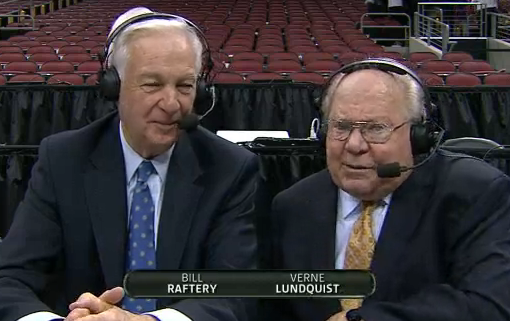 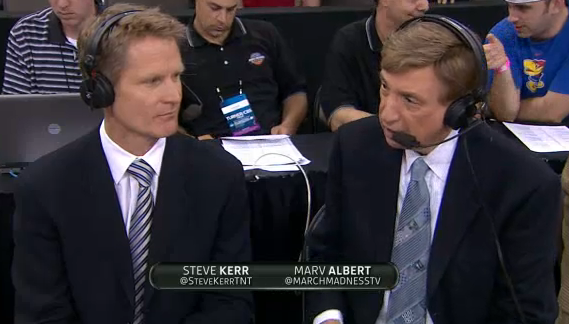 Matt: With the new television arrangement of the NCAA Tournament between CBS and Turner, the networks took a risk by hiring Turner’s big name NBA talent to cover the college game.  This move has certainly had its hits and misses.  However, bringing in the NBA announcers has been a success if only for the work of Marv Albert and Steve Kerr.  Currently, they are the best announcing pairing in pro or college basketball.  Granted, Marv wasn’t perfect last weekend.  He repeatedly called Missouri’s Phil and Matt Pressey “Presley” in the second half of their game against Norfolk State.  But, Marv Albert is simply the best to ever call basketball on television and his work remains at an overall high level.

Where this team really excels is Marv’s chemistry with Kerr.  The two can just as comfortably break down the game or rib each other while reading an ad.  Since he returned to television after a stint in the Phoenix front office, Kerr has become one of the top analysts in sports.  CBS and Turner know Kerr is the best they have as he was immediately moved up to call the Final Four with Jim Nantz and Clark Kellogg last year.  Whereas most of the other NBA talent fly in for just the tournament, Kerr periodically works college games for FSN on the West Coast during the season, so he has a fine grasp of the college game.  Even though they can’t be classified as college basketball announcers, these two are the best pair working the NCAA Tournament.

Matt: The combination of Verne Lundquist and Bill Raftery may be the most beloved of all the tournament pairs.  They’ve called NCAA Tournament games together for CBS since 2000 and no other broadcast pairing has quite the chemistry and relationship to viewers.  The fun that Verne and Raft have calling a game jumps out of the screen and into your living room (or office building) as the case may be.  At this point in his career, Verne isn’t going to be on top of everything calling a game.  However, the pairing with Raft brings out the best in him and he’s still up for the big moments.

Bill Raftery may be the single most popular NCAA Tournament announcer at the moment.  It seems that many announcers are trying to emulate his trademark sayings and way of speaking (as we’ll get to later on), but nobody can be like Bill Raftery.  Phrases like “ONIONS!”, “a little kiss”, “lingerie on the deck”, and “MANTOMAN!” have become staples.  Raft’s personality shouldn’t take away from his game analysis though, which is incredibly sharp.  A tournament game is simply more enjoyable when Verne and Raft are on the call. 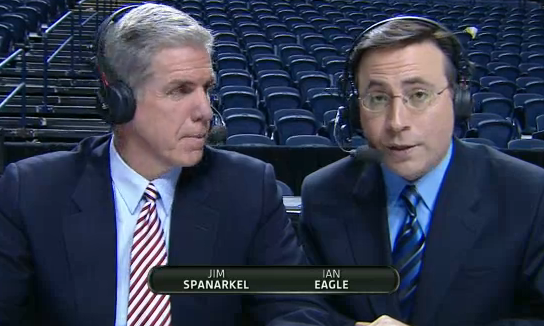 Ryan: Ian Eagle is slowly starting to get the recognition he deserves on a national basis.  This past season, Eagle was one of the best announcing teams in the NFL as one half of “The Bird and The Beard” with Dan Fouts.  With CBS, Eagle is also slowly rising up the pecking order.  Case in point, Eagle and his basketball partner, former Dukie Jim Spanarkel, were given the duties to broadcast the second night of the First Four in Dayton.  And once again, the pair did a stellar job with their assignments this past week.

With his personality and sense of storytelling, Eagle is the best on the CBS roster at conveying the excitement of a Cinderella run, such as with Ohio this year to the Sweet 16.  And while Spanarkel isn’t the flashiest announcer, he is usually devoid of tired cliches and has a better handle on late-game strategy than most of the CBS stable of announcers.  Believe it or not, this pairing is the longest tenured NCAA Tournament booth, announcing games together since 1997.  All things considered, they deserve a call up to the second weekend of the tournament. 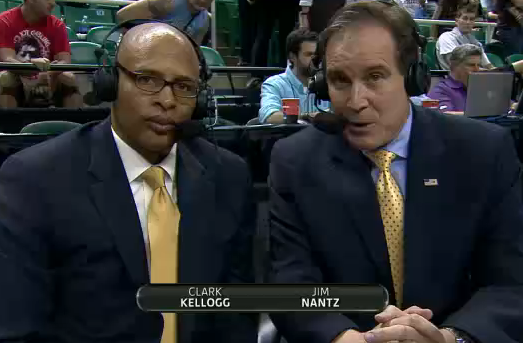 Ryan: Yes, this is the #1 team for CBS, for a reason that escapes me the more I watch these two call basketball games.  Between all of his other duties, it always seems like basketball is last on the list of Jim Nantz’s priorities.  At least he seemed to appreciate the contrast between his willowy promos for the Masters and trying to pitch viewers of truTV to stay tuned for Lizard Lick Towing.  But, because Nantz does so few college basketball games, it’s almost like the first weekend of the tournament is his Spring Training.  Certainly, Nantz usually raises his game for the Final Four, but there were times when Nantz didn’t seem as sharp.  It probably didn’t help matters with most fans that Nantz didn’t seem as up for Lehigh’s historic upset of Duke.  Maybe it’s because he heard the executives at CBS crying in his headset with the decline in ratings with the loss of the Dukies.

Above anything else though, it’s the lack of chemistry between Nantz and his partner Clark Kellogg that is most concerning.  Now, Kellogg is by all regards an incredible person, and his reaction to his son Nick’s success with Ohio was great television.  But, I’ve always felt Kellogg is misplaced as an in-game analyst.  He was perfect in his role in the studio, but it seems with the pressure of trying to describe the action in real time, Kellogg can drown at times.  Of course Clark Kellogg knows a five point deficit can be made up in two possessions, but for some reason Kellogg corrected himself to say it was a three possession game during one of the weekend’s games.  That and his bizarre analogies (Dairy Queen’d, Allen Wrench, Valutility, Pumpkin, Orange, etc.) are more of a distraction than anything else.  Steve Kerr was brought on to the Final 4 announcing crew for a reason, because he adds needed quality to this pairing. 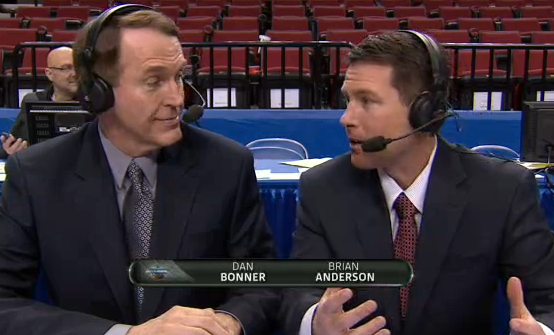 Ryan: There was plenty of intrigue with how Brian Anderson would perform as a basketball voice during March Madness.  Anderson has already become the voice for TBS and their coverage of the MLB postseason where he performed quite well last season.  But, how would Anderson do in the pressure cooker of March Madness?  The results were a bit mixed.  Yes, Anderson was polished, but at times, especially at the end of the VCU/Witchita St. and VCU/Indiana games, it seemed the action moved a bit too quickly for him.  Perhaps that’s understandable with Anderson’s background in baseball, but he certainly didn’t seem like the best fit for a dramatic finish.

As for Dan Bonner, there’s nothing good you can say about him, but there’s nothing bad either.  He just sort of blends in like the wallpaper.  From a new tandem working the first weekend of the tournament, it was as expected.  Solid, yet not spectacular.  I’d like to see Anderson get more experience calling action on the hardwood though. 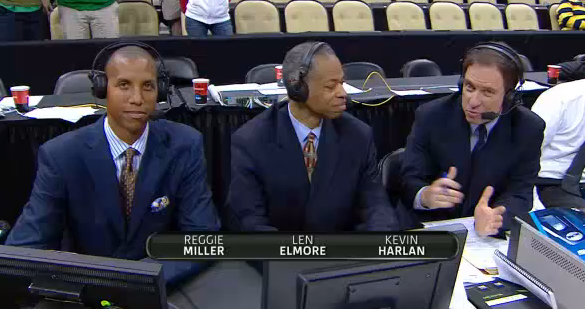 Matt: Readers of this site will know our affinity for Kevin Harlan as a play by play man.  Harlan stands as the most excitable, enthusaistic play by play man left in the CBS/Turner fold for the NCAA Tournament.  If there’s one person you want calling a buzzer beater in this year’s tournament, it’s Harlan.  He’s great calling a basketball game, pro or college.  But, the three man booth with Harlan, Reggie Miller, and Len Elmore hasn’t worked out this year.

Harlan works with Reggie Miller on NBA games, and that’s where he should be left.  Miller is out of place working the NCAA Tournament, which doesn’t even begin to touch on some of his struggles as an analyst – “What a dodge to bullet” and calling DeShaun Thomas “Thompson” were just two of many flubs.  It was laugh out loud funny to hear Reggie call a three pointer that put Loyola 5-1 ahead against Ohio State a “dagger” in the first round.  If that wasn’t enough, Miller spent so much time arguing and talking with fellow analyst Len Elmore, the game took on a secondary role at times.  Miller and Elmore have the chemistry of Craig James and Mike Leach in the booth and Harlan often sounded like he was trying to squeeze in his play by play between the two.  A three man booth needs great chemistry to succeed, and this trio doesn’t have it. 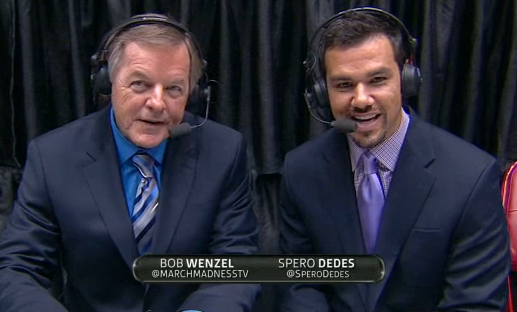 Ryan: Give Spero Dedes credit, his pesky little DWI last summer hasn’t slowed down his meteoric rise in the broadcasting business.  At just over 30 years old, Dedes already has March Madness, the Olympics, the NFL, and radio play-by-play for the Lakers and Knicks on his resume.  And after a few years of experience, Dedes’ potential is starting to pay off in tangible results more and more.  His silky smooth delivery has only improved over the years.  It’s hard to quantify, but Dedes just sounds like someone who was born to broadcast basketball games.

So far though, his national profile has been hampered by low-profile games and low-profile analysts for partners… like Bob Wenzel.  Now, maybe at one point long ago, Wenzel was a decent analyst.  But between his strange use of vocabulary, random excitement, and even more random utterances in and out of breaks, Wenzel can just be awkward to listen to.  Clearly, these two are on opposite career trajectories. 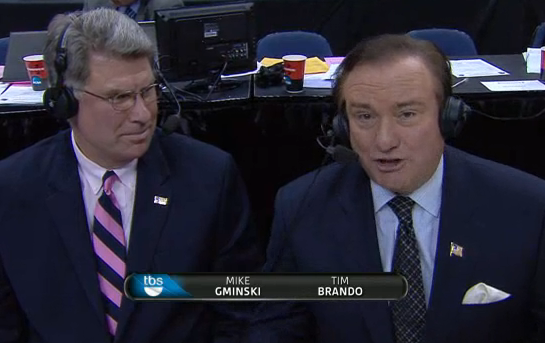 Matt: This pairing is like Dedes and Wenzel in many ways (which is why they tie for seventh on our countdown) except reversed.  In this pairing, it’s Brando that has the awkward, excited statements going into commercial breaks.  With there being about 38 timeouts in every game, these are noticeable.  The one that was most peculiar was Brando yelling about MSU’s Derrick Nix not eating the entire turkey at Christmas this year into a break.  After the break, we came back to an even more awkward on camera spot with Gminski calming Brando down and noting the play Nix made was actually a travel.

These two work together calling ACC games during the year, so chemistry isn’t a problem.  Gminski is solid as a game analyst.  Brando is better suited for the studio than play by play, where he does good work for CBS’s college football coverage and has his radio show simulcasted on CBS Sports Network.