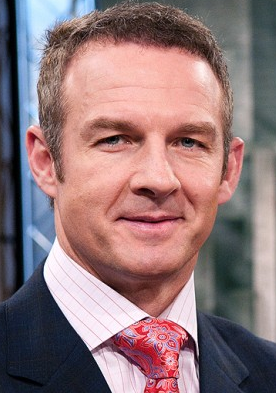 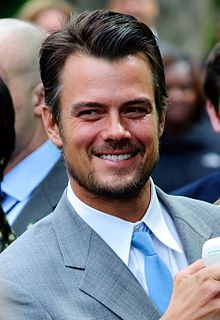 Taking sides on Tim Tebow has turned into the great cottage industry of the sports media.  While some have made quite a career out of blindly and ignorantly staking what little integrity was left of their own career driving the Tebow bandwagon (see: Bayless, Skip), others have attempted to take the opposite flank in hopes of making a similar name for themselves.

ESPN NFL analyst Merril Hoge has been the loudest and most vociferous Tebow basher in Bristol over the last couple years, but he thankfully hasn't been rewarded with the international infamy of his ESPN counterpart, Skip Bayless.  (Evidently there's only room for one ESPNer to make a career out of TebowMania.)

Hoge has criticized Tebow for everything from his running and passing to which side of the bed he gets out of in the morning.  Most recently Hoge took his attacks down to a personal level, because criticizing Tebow's non-existent play on the field just wasn't getting the job done anymore.  Hoge called Tebow as "phony as a three dollar bill" this week because of WildcatGate, which created another controversy filled Tebow news cycle for ESPN, or as the folks in Bristol call it – nirvana.  Whether or not Tebow quit on the Jets or the Jets quit on Tebow, the media can't quit on either.

Hoge's "analysis" when it comes to Tebow is nothing short of the promo a professional wrestling villain cuts to try to get the home crowd to boo him.  He's *this close* to calling Tebow supporters fat, out of shape, inner city sweat hogs.

Sticking up for Tim Tebow isn't the most popular position to take at the moment.  However, one brave man has finally seen enough and decided to stand up to Merril Hoge and his repeated bashing of the Jets third string quarterback.  That man is… 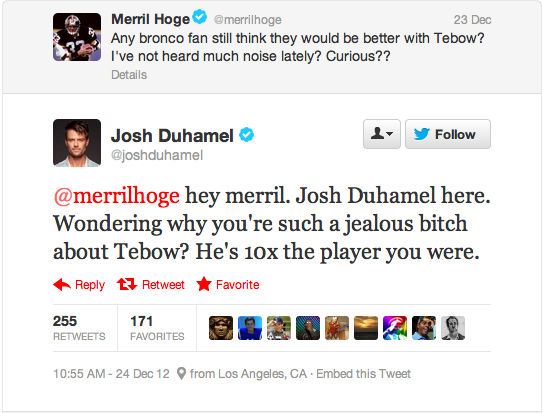 The best part about this tweet isn't Josh Duhamel cussing out Merril Hoge.  It isn't even Duhamel shoving it in Hoge's face that Tebow was and always will be 10 times the player he was.  It's the fact that Josh Duhamel feels the need to tell Merril Hoge it is in fact Josh Duhamel tweeting him.  It's not like the @JoshDuhamel Twitter handle, name,  picture, and fancypants blue checkmark wouldn't have given that away before.  As if it would turn Merril Hoge's world upside down for anyone of note to actually notice what he says.

Where else but Twitter could a Hollywood actor curse out an ESPN analyst for his thoughts on Tim Tebow for all the world to see?  God I love these times in which we live.

(Tip of the cap to Nastinchka)