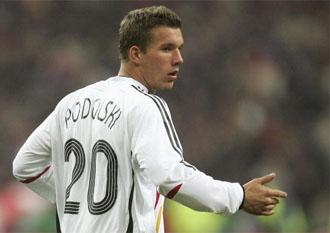 This has to rank right up there with one of the strangest stories I've ever seen.  ESPNSoccernet today published an interview with German striker Lukas Podolski.  Podolski has made 101 career appearances with the German National Team including at Euro 2012 and moved from FC Koln in the German Bundesliga to Arsenal in the English Premier League ahead of next season.

The interview was done by ESPNSoccernet's Nick Bidwell.  Bidwell has done interviews with Manchseter City's Yaya Toure, Bayern Munich coach Jupp Heynckes and GK Manuel Neuer, and others in the past year.  So, an interview with Podolski shouldn't be anything out of the ordinary, right?  Except one slight detail.

Podolski says the whole thing is made up.

He posted the following message on his official Facebook page:

"Hey guys, on the ESPN website there is an interview published I never gave. It contains parts, which are completely made up. Please ignore it! Cheers, Poldi"

A screengrab is below as well. 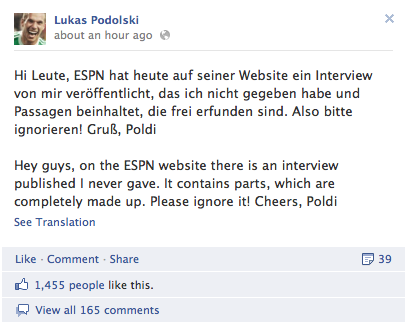 The interview is featured prominently on the ESPNSoccernet homepage as you can see below from Saturday afternoon, an hour after Podolski's Facebook post. 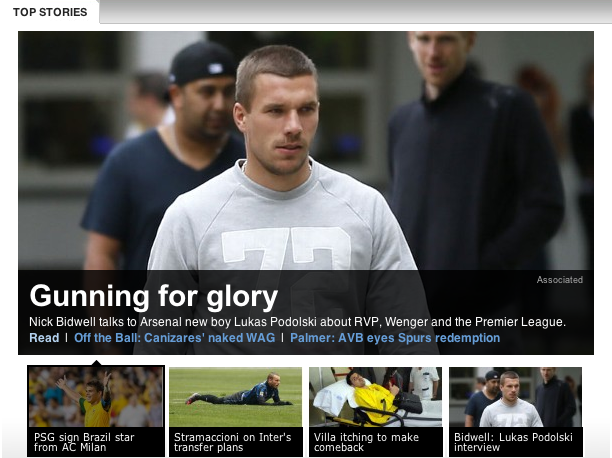 Even more surreal, people have taken to the comments in the article to forward Podolski's statement about the interview being a hoax.  Obviously, something isn't right here.  Did Bidwell actually interview Podolski and include manufactured quotes?  Have the two ever met or even spoken?  Is Podolski misremembering something?  Is the whole thing completely fabricated?  It's hard to believe a writer at an outfit like ESPN would be able to just make up an entire interview in the soccer offseason, but then again, strange things like this have happened before.

ESPN has yet to offer an official response, but we have an inquiry in to the network to discover what happened.  More to come as it develops.

UPDATE (3:25 ET): About 3 minutes after this article published, the interview with Podolski was taken down from the ESPNSoccernet website and replaced with this image.  Hmm…