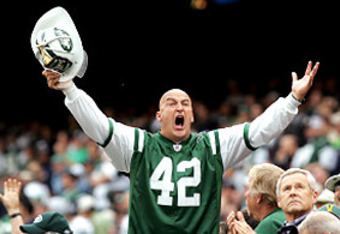 Each time I think a week is going to go by without the most ridiculous story of the NFL season coming from the New York Jets, I am proven wrong.  This week it doesn't come from ESPN or Tim Tebow or even Bart Scott, but Jet super fan extraordinaire Fireman Ed.

Fireman Ed is stepping down.

Stepping down from what exactly I'm not sure, but he wrote an entire column at Metro.us to explain his "resignation" that has sent shockwaves around the nation.  Shockwaves.  In fact, I'm surprised a national day of mourning hasn't been put in place to give all of us the proper time to cope with such tragic news.  How will we go on with our mundane daily lives knowing Fireman Ed will not be there to loudly spell the world "Jets"?  How will we go on?  How!

"On Thanksgiving night, I left the Jets game before halftime. This was the second time in a row I left before there were four zeroes on the clock. We have had much worse teams than this and I never left before. I pride myself in that, because I am not a quitter.

I decided to leave Thursday because the confrontations with other Jets fans have become more common, even though most Jets fans are fantastic.

This is an indication of how society has lost and is continuing to lose respect for one another. The stadium has become divided because of the quarterback controversy as well. The fact that I chose to wear a Mark Sanchez jersey this year and that fans think I am on the payroll — which is an outright lie — have made these confrontations more frequent. Whether it’s in the stands, the bathroom or the parking lot, these confrontations are happening on a consistent basis."

Now it's all coming together.  Fireman Ed had to step down because of the coarsening of society and the lack of decency amongst our fellow man.  You see, Jets fans are bringing it upon themselves because they are cannibalizing their own.  What's more, Fireman Ed indirectly blames the Jets "quarterback controversy" for this division amongst the Gang Green faithful.  Is there anything Mark Sanchez and Tim Tebow haven't ruined yet this year?

Why did Fireman Ed have to make this monumental decision?  Because he had to step down before he made a mistake.  You see, there are too many kids out there that look up to Fireman Ed, of course…

"Although I can “hold my own,” I do not want to lose my temper and make a stupid mistake. I have a responsibility to the families and kids that enjoy the game and Fireman Ed.

I will always love the Jets because they are in my heart, and I will attend games as usual, just not as Fireman Ed. God bless and, as always, let’s go Jets!"

Sure, Fireman Ed could take any greaseball that comes his way in a fistfight, but he's a role model looked up to by America's youth.  There are too many kids that enjoy Fireman Ed's zany antics according to Fireman Ed.  Thankfully, although Fireman Ed is hanging up his… hat? jersey? front row seat?… he's still going to attend Jets games, just as an actual person and not a drummed up mascot who refers to himself in the third person and thinks enough of himself to step down from an imaginary position of some legitimate importance.