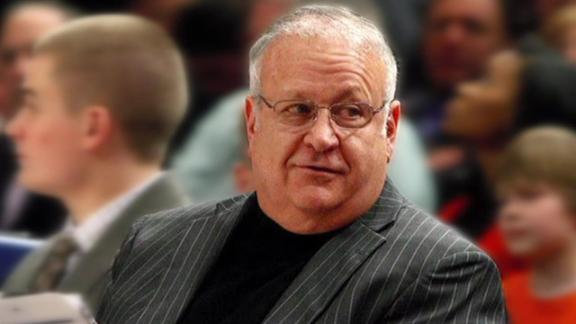 In the wake of the Jerry Sandusky scandal, ESPN went all-in pursuing sexual assault allegations against Syracuse men’s basketball assistant coach Bernie Fine.  The reporting by ESPN’s Mark Schwarz presented a fairly convincing case that something was going on with Fine as multiple men came forward accusing the coach of sexual misconduct.  However, since the initial story was published by ESPN in November, the original allegations against Bernie Fine have transformed into the messiest story in the last year and the role of Schwarz and ESPN has come under intense scrutiny.

How far have things gone off the boil in this case?  Wednesday, Laurie Fine announced she was suing Schwarz and ESPN at a castle in New York.  That’s a long way off from the initial reporting of November 2011 and it’s one dizzying turn after another to get there.  Let’s recap, shall we? (Timeline after the jump.)

November 18th – Fine is placed on administrative leave at Syracuse, never to coach again for the team.

November 27th – A third accuser, Zach Tomaselli, comes forward saying Fine abused him in 2002.  Tomaselli himself is facing charges at the time for molesting a 14 year old boy in Maine.  ESPN also releases an explosive audio tape from 2003 of a phone call between Davis and Bernie Fine’s wife Laurie in which they appear to discuss the allegations.  The tape was never made public in 2003 by ESPN or the Syracuse Post Standard, who Davis had given the tape to.  Fine is fired by Syracuse.

November 28th – ESPN director of news Vince Doria publicly defends the network’s reasoning for letting the audio tape sit for almost a decade.  ESPN is met with criticism for not pursuing more information with the audio tape or the allegations against Bernie Fine until after the Sandusky story broke eight years later when a second alleged victim came forward.

November 30th – Tomaselli tells the Kansas State Collegian that it was ESPN’s Mark Schwarz who put him in contact with original accuser Bobby Davis.  After hearing the Bernie Fine story on Colin Cowherd’s radio show, Tomaselli e-mailed Cowherd, who forwarded the e-mail to Schwarz.

December 2nd – Vince Doria speaks with Howard Kurtz of CNN about ESPN’s handling of the story and admits it was a mistake for ESPN and Mark Schwarz to put Tomaselli in touch with Bobby Davis.

December 7th – Onondaga County DA William Fitzpatrick finds the stories of Davis and Lang to be credible, but can’t press charges against Fine because the statute of limitations had passed.  In his press conference, Fitzpatrick criticizes the handling of the infamous audio tape.

January 20th – The third accuser, Zach Tomaselli, admits he told lies and doctored e-mails in his stories about Bernie Fine.

April 13th – Tomaselli finally confesses everything he said regarding Bernie Fine was a lie.  In a mindboggling turn of events, Tomaselli reveals his motivation for coming forward was Syracuse’s victory over Kansas in the 2003 National Championship Game.  He also claims to be told what to tell police by original accuser Bobby Davis.  Tomaselli makes this admission as he is sentenced to three years in prison for his own molestation charges.  Immediately, Davis spoke with ESPN’s Mark Schwarz and denied Tomaselli’s allegations.

May 11th – A judge dimisses a slander suit brought forward by Davis and Lang (and attorney Gloria Allred) against Jim Boeheim for his comments at the beginning of the scandal.

May 16th – In the latest development, Laurie Fine goes to a castle in Geneva, NY to announce a lawsuit against ESPN, Schwarz, and producer Arty Berko for libel.  ESPN responds by saying they stand by their reporting and to their credit, they cover the lawsuit on SportsCenter.

May 17th – Mike Lang spoke to the Syracuse Post Standard about conflicting past statements, being “glad” his own lawsuit was dismissed, his allegations against Bernie Fine, and support for Mark Schwarz in a wide-ranging interview

Still following along?  That doesn’t exactly fit a neatly tied narrative.  When the story broke, it looked like we had another scandal on the lines of Sandusky and Penn State on our hands.  Several months later, we have a quagmire of allegations thrown every which way possible.

It’s impossible to make any grand judgments in this case becasue of a number of factors, not the least of which the sensitivity and seriousness of allegations of sexual assault and the non-linear path the story has followed.

Between November and May, there has been an inordinate amount of false leads and questions about the reporting along the way.  Therein lies ESPN’s role in the messiness of this story.

In truth, Laurie Fine’s lawsuit against ESPN is just another plunge further down the rabbit hole.  Here we are, several months later, arguably further away from the truth than when the report first dropped.  For a story and subject matter as important as this, that’s a shame.