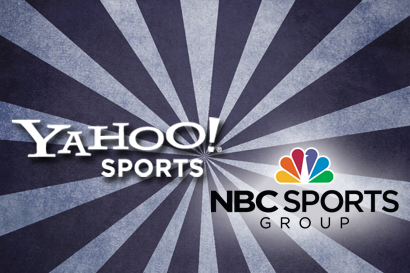 It was a little over a week ago when two of the larger players in sports announced a significant strategic parnership. With an impressive list of assets between NBC and Yahoo, the unexpected alliance has the potential to be a game changing move within the sports media industry. By the same token, similar media partnerships have over time proven to be hard to implement and maintain and have often dissolved without any substantial value added to either entity. With that in mind, I got in touch with Rick Cordella, SVP and GM of Digital Media at NBC Sports Group, to get some more information on how exactly both companies plan to benefit from working with each other going forward.

Q: An All Things D article from October mentioned that a NBC/Yahoo partnership had been "in the works for some time." When and how did conversations take root between both companies?

A: We worked with Yahoo! Sports before on a previous Sunday Night Football agreement. However, the preliminary discussions regarding this specific partnership began about a year ago.

A: NBC Sports has a 70-year history of producing best-in-class video. It’s in our DNA, and we have a new, 350,000 square-foot, state-of-the-art production facility with a studio dedicated solely for web content.

As you mention, both Yahoo! Sports and NBC Sports have great assets and talented personalities. We fully intend to utilize them to produce compelling original content for sports fans.

Another major piece of video is live streaming. NBC Sports has acquired the rights to some of the most valuable video content in sports. We have an impressive live streaming portfolio of successes with the Olympics, the Super Bowl and Sunday Night Football. And it will grow exponentially in the coming months and years as we acquire more content and begin streaming NBC Sports Network and Golf Channel content. In 2012, outside of the Olympics we streamed approximately 100 different events. By 2014, we’ll be streaming between 800-1,000 sporting events. Yahoo! will link and promote to our NBC Sports Live Extra video player in a more strategic and comprehensive way than ever before, allowing sports fans who are visiting their site to easily access our video.

Q: Outside of Pro Football Talk, mainstream sports fans felt NBCSports.com lacked an identity. Do you feel this partnership gives you the opportunity to better define yourself to sports fans? How can you differentiate from ESPN and others?

A: Since we began partnering with Mike Florio and Pro Football Talk, we have adopted its “talk” style – brief, intelligent reports that are frequently updated. We climbed from a Top 20 site to Top 10 by reproducing the “talk” model on our site.

But we saw this agreement as a unique chance at exponential growth as Yahoo! is second to none in scale.

Q: From partnering with PFT (still not owned and operated by NBC?) to the Comast merger and Versus rebranding, the Olympics, and now this partnership, it seems a lot of groundwork has been done in recent years. Have the stars lined up for NBC to move the needle digitally or are there still major elements of the strategy that need to be addressed?

A: I think the stars lined up the minute we started streaming the NFL and signed Mike Florio. Over the last several years NBC Sports Digital made smart bets to grow the profitability of the business. That’s more important than comScore rankings. Not to say that reach isn’t important – it is, but only in relation to how it affects the bottom line.

This Yahoo alliance will enable us to be the No. 1 trafficked sports site for the foreseeable future. The key is just not being No. 1; it’s getting eyeballs where we want them. We have an unprecedented collection of video rights, best-in-class writers and on-air talent.

Q: Yahoo pioneered what I call the "Mottram model" of sports blogs which has since been replicated many times over (including Bloguin and NBC). Given the overlap of those properties (PBT, HBT vs. Big League Stew, Ball Don't Lie), do you foresee any adjustments to the NBC Talk blog strategy?

A: Mike Florio had been writing “Football Talk” since 1998-99. That’s really what we tried to emulate through different verticals. No major adjustments. We’ll simply continue to invest in talent and depth, and how we deliver that content.

Q: The concept of localized sports portals is gaining some steam with ESPN and CSN both investing heavily in this space among others. Do you foresee local sports portal growth being where most of the upside lies for NBC/Comcast or do you feel it can come from having a national portal?

A: The upside lies in the collaboration, efficiencies and execution of all of our properties. We run NBCOlympics.com, GolfChannel.com, Rotoworld.com in addition to the CSNs and NBCSports.com. Leveraging technology, products, promotion and content across the board gives us a unique position.

But there is a lot of potential in local. Many fans care more about their local team than the sport in general, and this allows us to connect with people that normally wouldn’t visit a general sports site like NBCSports.com. We compete in local markets with newspapers, radio stations, and plenty of local websites – it’s a tough business. But the advantage we have, as TVE proliferates, is that we’ll have your local team live on your digital devices. We’ll be a must-visit for even the most casual local fan.

Q: Olympics and radio network collaboration seemed to be off the table in this partnership. Most are surmising that there is too much overlap or competitive assets on this front. Was this a case of focusing the partnership to where it made strategic sense or was it just too messy to figure out ways to work together on those platforms?

A: This alliance is significant, covering video, original programming, fantasy and college sports content. Right now, we’re focused on activating this new partnership successfully. However, we will continue to look for other ways to work together when appropriate.

Q: Going forward what is the specific item of this partnership that has you most excited? What's the biggest challenge and scares you the most?

A: It’s pretty easy to look at the partnership and get excited. We’re two big companies with incredible talent, rights and audience. As you mentioned, it’s about the execution. I have no doubt we’ll realize all of the partnership’s potential and then some.

We'll certainly keep an eye out as NBC & Yahoo begin to implement elements of the partnership onto their websites and programs going forward. It will be interesting to see if other media companies start looking for dance partners as well.