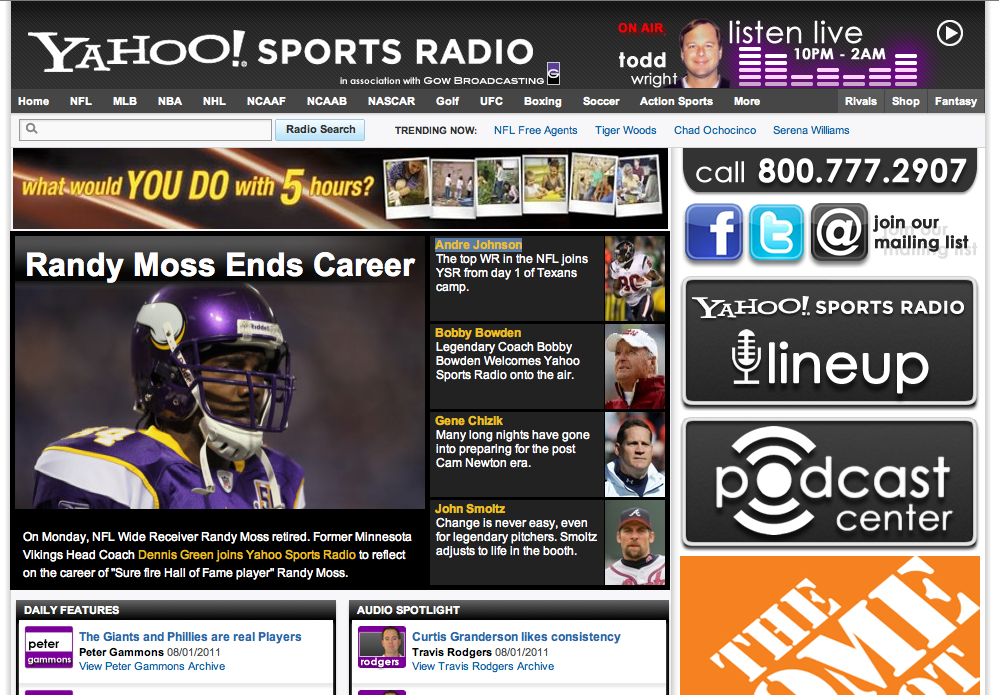 I just celebrated a birthday which has only confirmed the well known fact that I am getting old. The biggest hangup about that realization is I’m becoming more and more of a cynic which means my love for new music that you’d hear on the radio has dwindled. With that in mind I spend the bulk of my time in my whip listening to sports talk radio and of late, the newly launched local Sporting News affiliate. Just as I was learning the various promotional jingles Sporting News Radio plays, they’ve decided to rebrand the network as Yahoo! Sports Radio (don’t forget the exclamation mark, they hate that).

“We’re aligning with the No. 1 sports media web company in the world,” Gow said. “We’re picking up one of the most recognizable brand names in the world. We’re getting access to some of the best sports journalism in the country, and we get to link ourselves together in a way that will accelerate the growth of our digital business.

“When you combine the sports experts of Yahoo and Rivals with our on-air talent and analysts, we believe we will have the best roster in sports radio. And we can take that combined roster and create compelling sports radio, grow our affiliate base and audience size and take our company to much greater heights.”

Unlike NBC, the rebranding has been swift and efficient. Google Sporting News Radio and both their former site and their Wikipedia page are already replaced with the proper Yahoo! Sports Radio pages. Yahoo seems to have given the network a nice hub page as you’ll see below.

From a programming and promotional perspective this is really smart. The various writers and bloggers at Yahoo have a larger following than the Sporting News’ editorial talent. Yahoo’s built in web following can much more easily promote selected relevant programming to help bring in new listeners. On the flip side, Yahoo will be be able to tap into the built audience of Sporting News Radio and get folks to adopt things like Yahoo fantasy sports, Sportacular, The Post Game, and the Y! Sports blogs.

A lot of sports fans continue to clamor for a “true” ESPN competitor although the majority of those fans spend hours and hours consuming ESPN content on some platform. NBC/Comcast remains the most viable candidate as entities like Sports Illustrated and Yahoo Sports have traditionally been segmented to one platform. With solid positions across online, television, print, and radio, ESPN has long been able to dominate the space.

However as Yahoo moves to radio, you can maybe see a scenario where ESPN has to become defensive fighting a two front war and things open up a bit more although I think that is more wishful thinking. Yahoo affiliates usually hold some local radio rights (A’s games locally) and then fill in the rest of the day with shoulder programming and syndicated programs. I don’t believe the network has any national rights for any major sport, which is where ESPN holds a major advantage.

For The Sporting News, there is no way to spin it. Awhile back they reached their big partnership with AOL to rent the Fanhouse brand and AOL.com promotion. As a combined digital entity they really promoted the fact that they were now a top 10 sports entity according to Comscore. Since then they’ve fallen out of the top ten and have other media entities closing in their rear view mirror. This surely won’t help their digital efforts nor help promote the magazine and other print products.

With XM/Sirius, podcasts, Westwood One, ESPN, and now Yahoo Sports, you have to wonder if the space is a bit overcrowded but for now it seems like all these entities are holding their own. I’d imagine my planned MTV Challenge Duel/Gauntlet/whatever they called it podcast will really shake up the industry.