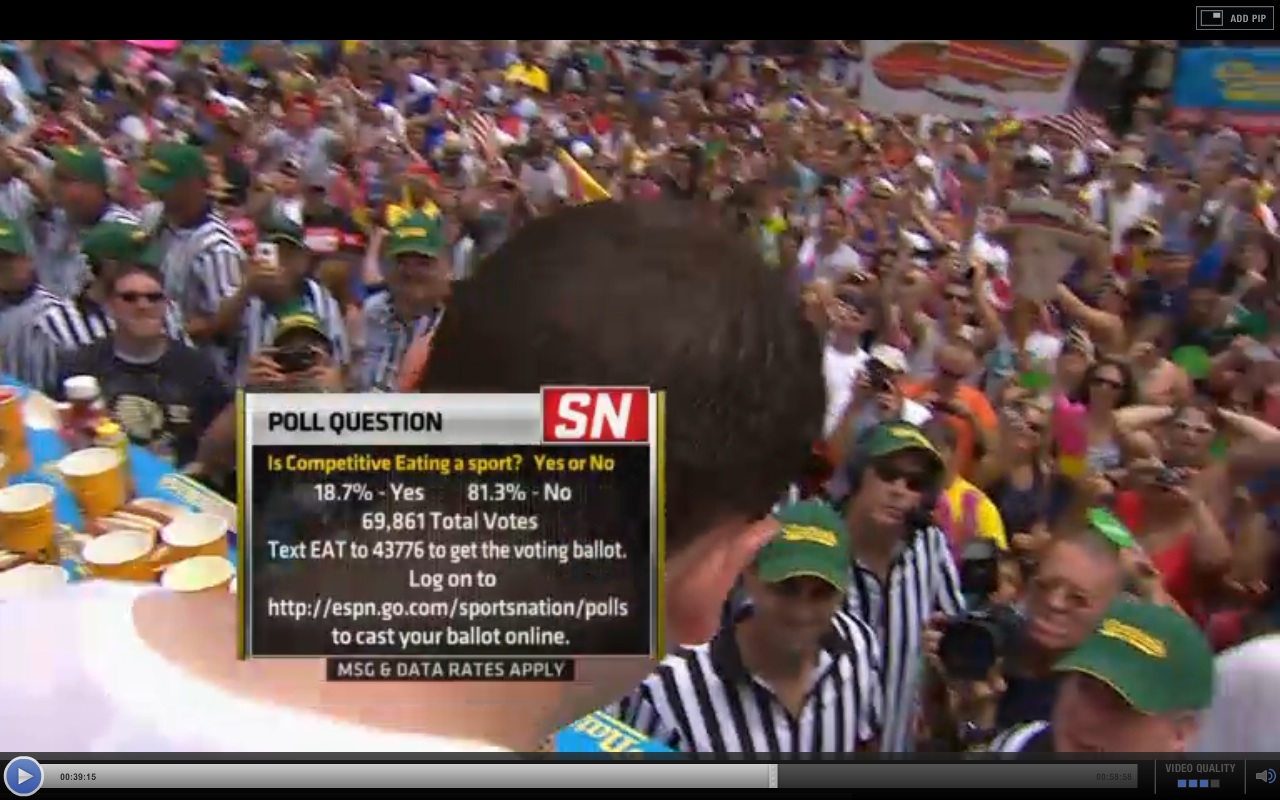 Nothing says celebrating the birthday of the greatest country in the world than seeing a bunch of grown men partake in gluttony.  The Nathan’s Hot Dog Eating Contest has emerged as the premier “sporting” event of the 4th of July and is as synonymous with the holiday as college football is to New Year’s Day, the NFL is to Thanksgiving, or the NBA is to Christmas Day.  Personally, I enjoy the hot dog contest not because of the great “athleticism” or “competition,” but for the drastically over-the-top presentation by ESPN.  I hope everyone involved is in on the joke because it has become the most ridiculous competition of the year.  In spite of the hype and popularity, please stop trying to convince us that this is a sport…

Bobby Heenan and Gorilla Monsoon might as well be calling this thing, but in reality, former Indy 500 play by play man Paul Page and MLE President Rich Shea provide the farcical commentary.  Shea in particular is so laughably overdramatic that I’m convinced he’s a master promoter well aware of what he’s doing.  After all, he has Major League Eating involved in a worldwide news story and his top event is broadcasted nationally on ESPN.  Below the best and most insane quotes from the day.  In case you missed it and you want to see it, you can watch the 10 minutes of eating here.  What a country.

Champ Joey Chestnut before the event – “I feel great, I’m hungry, I’m happy, it’s the 4th of July and I’m gonna do whatever it takes to win.”

Runner up Pat Bertoletti – “I started eating competitively because I was talentless in all other realms of competition.”

*It’s Brenkus, but who cares.

MC George Shea – “Are you ready to ride the tornado and make love to the dragon?”*

*What happens if I say yes?

Shea introducing Bertoletti – “American by birth, Italian by name, and Irish by the grace of God, let me hear it for the man from Chicago, Patrick Bertoletti!”

Shea introducing Tim “Eater X” Janus – “Now, he travels the worldwide eating circuit seeking clues to his former life… he remains a man of mystery even to himself.”*

*Chestnut’s intro may be the greatest MC introduction of all-time.  We need this at the Super Bowl in place of Nantz or Buck giving us the starting lineups with a collective yawn.  George Shea makes Michael Buffer look like Bruce Buffer.  (sorry, Bruce)  Can we get George Shea to introduce the starting lineups at every single sporting event in America?  Just imagine what he could do with Tiger Woods….

Analyst and MLE President Rich Shea – “Look at that gnawing motion of Eater X, it’s a bite that only Gary Bettman could love.  Alex Burrows take note my friend.”

Shea – “Eater X and Pat Bertoletti are like the Winklevoss twins to Joey’s Zuckerberg.”

On the guest Chinese competitors…

Shea – “So brave of these guys to come to Coney Island on the 4th of July to literally eat America’s lunch.”

Page – “They’re trying to take over in everything, aren’t they?”*

Page – “They need to take a look at that piece we had on technique… this is just politely eating.”

Shea – “When I think of savory chicken dishes I think of the Colonel and General Cho*, Mr. Kui does not have any military experience, and it looks like limited hot dog experience.”

*This whole discussion may have been one of the most covertly racist exchanges ever seen on ESPN, especially with the perfunctory fear of the impending world Chinese takeover.  The Coney Island crowd even booed the Chinese eaters during their intro.  The foreign heel is a classic mantra of pro wrestling with an endless list of bad guys – Col. DeBeers, The Iron Sheik, Abdullah the Butcher, Kamala, Nikolai Volkoff, Ivan Koloff, and even Bret Hart.  It’s an easy story to tell.  That’s why the whole Kobayashi story is great for the “sport.”

*And how does the commissioner of MLE not know that it’s General Tso’s chicken and not General Cho???

Shea on Chestnut – “He can pick up his 5th straight and be the Bjorn Borg of the smorgasbord.”

Shea on Chestnut again – “At this moment in the contest when I see Joey eating with this ferocity and this determination I get filled with emotion.  We’re not even at the end yet and I’m more emotional than the last episode of Oprah because this kid brings every single thing he’s got, every bit of his fiber.”

Shea on Chestnut once more – “Like Hines Ward and Dancing with the Stars he’s not afraid to let himself go.”

*Yes folks, this is America in all of its glory.