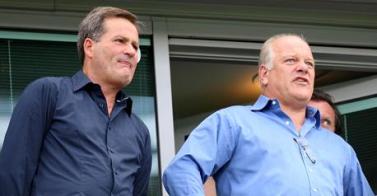 Why not continue our global trend recently at AA by going from Australia to England for another interesting story.  A few weeks ago, we brought you the news of ESPN broadcaster Ron Franklin, who was fired from the network for his incendiary comments towards sideline reporter Jeannine Edwards.  To continue the ugly episode, Franklin has now sued ESPN for wrongful termination.  Franklin contends he was fired without proper cause – good luck with that.  Well, apparently Sweet Baby Ron is starting a trend around the world.  When you combine sexism with an unknown hot mic, bad things are going to happen… as broadcasters Richard Keys and Andy Gray of Sky Sports in Britain are now experiencing.

Soccer fans in America know Andy Gray as one of the voices of EA Sports’ very popular FIFA series of games and analyst for Champions League games that appear on the Fox Sports networks.  Keys is a studio host for Sky and both men were brought to America for coverage of this summer’s World Cup on Fox Soccer Channel.  During Saturday’s Premier League game between Liverpool and Wolves, Fernando Torres scored a goal for Liverpool that involved a questionable offside decision in favor of Liverpool midfielder Raul Meireles.  The two men criticized the decision over an open mic and had harsh words for the female linesperson, Sian Massey.  Here’s the audio clip, but with the thick British accents the transcript may be more helpful.  From the UK Daily Mail…

“Commenting on Ms Massey, Mr Keys said: ‘Somebody better get down there and explain offside to her.’

Mr Gray, a former Scotland striker, replied: ‘Can you believe that? A female linesman. Women don’t know the offside rule.’

Mr Keys replied: ‘Course they don’t. I can guarantee you there will be a big one today. Kenny (Liverpool manager Dalglish) will go potty. This isn’t the first time, is it? Didn’t we have one before?’

Later in the exchange, Mr Keys said: ‘The game’s gone mad. Did you hear charming Karren Brady this morning complaining about sexism? Do me a favour, love.'”

For the record, Karren Brady is an executive at West Ham United in the EPL, appears on the UK Apprentice, and had voiced concerns about sexism in the sport earlier in the day.  The hilarious part about this story is that replay showed Massey made the correct call – showing that it’s in fact Keys and Gray that are going mad.  I’m a soccer fan, but no expert on UK culture, so it’s hard to say whether or not Keys and Gray will get the heave ho like Franklin did.  My somewhat educated guess is that since they are much bigger broadcasting names in Britain than Franklin was in the US, they will keep their jobs.  Some may argue that Franklin was a victim of the hypersensitive PC culture stateside, but I lean towards the side that there’s no room for behavior like this in the 21st century.  By the way, I don’t think you can compare either episode to the Kim Clijsters/Todd Woodbridge clip that Ben addressed earlier in the week, which was more playful banter than anything else.  I imagine that Sky will give them a slap on the wrist and plead with them not to be so neanderthalic… even when they think their mics aren’t on.  Perhaps our UK readers (there’s got to be at least one out there!) can comment and lend some insight.  Oh, and, learn the offside rule boys, because you’ve been proven to be wrong here in more ways than one.

***UPDATE – The pair are suspended for tonight’s Sky Sports coverage of Chelsea v Bolton.  As SI soccer writer Grant Wahl points out on Twitter, this is like Al Michaels being suspended for a game.