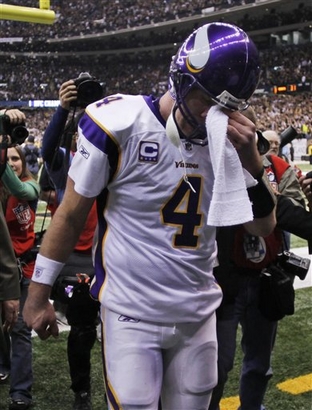 I’m not sure you’re aware of this, but Brett Favre’s consecutive games starting streak ended last night.  You may not be aware because ESPN buried the story behind Cliff Lee’s signing in Philly, Monday Night Football, and NBA/NHL highlights.  Wait… it was the lead story?  No way, Favre was talked about on ESPN?  For 12 straight hours?  And this morning too?  Oh, and Trent Dilfer was nealry in tears?  Wow, you don’t say.  I never would have guessed that.  Plenty of folks did have a say last night on the gross love affair between Brett Favre and Bristol.  As always these are Real Tweets from Real People…

(You know it’s a good night when ESPN begins by talking about Favre’s “steak.”)

dagotron If this is how insufferable ESPN is when Favre misses a start, I can’t even fathom how bad they’ll be when he finally retires (for good).
uublog Please, ESPN, I will match Cliff Lee’s new contract with the Phillies if you shut up about Brett Favre. #CliffLeeMania
vjmartell ESPN is making me vomit with Favre coverage. Enough!
Texas_Gal That ESPN is still talking about Favre 20 minutes after one of the most exciting football game endings and FA MLB signings is insanity.
Jediaxle All the announcers trying to tell us to forget past 3 years and not hate Favre but #espn & their over coverage is the reason for the hate.
morepete You guys? Brett Favre is dead. At least I think so based on what Matt Millen’s saying on ESPN. Only explanation #restinfavre
cmschneid19 When Favre finally retires, ESPN is going to have to go to 6 hours of dead air a day.
TVMcGee ESPN: “Favre has a load off his shoulders now without all the press that we gave him 24/7 for the past few years.” #irony

emcerlain Dilfer asking us to remember Bret Favre of mid-90s. Thanks to ESPN, we’ve never had a chance to forget. #espnfail
mrejr8234 Oh….My sources are telling me contrary to ESPN’s coverage Favre didn’t die but just didn’t play this week.
bigmike05 BREAKING NEWS: ESPN has fired @Buccigross and Brett Favre will now host the live SportsCenters which will be called FavreCenters henceforth.
bwompbwomp Hot off the heels of an OT thriller on Monday Night Football, ESPN cuts to a half an hour of Brett Favre talking. #fail #StopIt
BW_Jones According to ESPN, in the time it took for a Brett Favre presser, the Phillies went from entering the Cliff Lee sweepstakes to signing him.
wwtdd there’s no greater distance than the one between how much i give a sh*t about favre and how much espn thinks i do
danburke2 With Brett Favre out, ESPN will now show re-runs of Family Matters to fill their time void.
DeMar_DeRozan Espn acting like it’s the end of the NFL that Favre is inactive tonight.

Magic_Busdriver Dunno what kind of texts Brett Favre sent to #ESPN producers, but they are slobbering over him this morning.
cdiionno @AdamSchefter The real question: is ESPN’s streak of 1,827 consecutive days leading off w/ a Brett Favre story now in jeopardy?
Seannyd114 Wait! Favre DIDN’T play last night?! How did I not hear about this somewhere?! You’d think ESPN would have showed it at least once. #sarcasm
kieks87 @reneepaquette So now that the Favre streak is over does Ed Werder and ESPN start following the Undertaker around?
412_lax Trent Dilfer is near tears on ESPN talking about Favre
MBorkowski ESPN is taking so long to get to the Cliff Lee story because they are trying to get Cliff Lee’s thoughts on Favre.
GiftedGuru …watched some USA and Lifetime tonight, simply to avoid ESPN’s circular bloviation re: Saint Favre. Kill me. Please?
BrettFavreFacts ed werder on ESPN correctly chastising vikings players for focusing too much on the game tonight and not paying enough tribute to favre

Of course, that’s not all though.  Milliseconds after Favre missed the start last night, his official website began selling autographed footballs commemorating his streak for the low, low price of $499.99.  I’m sure Trent Dilfer has bought 10 already.  No word on whether a free picture of Favre comes with it or not.