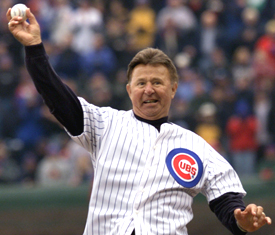 Former Chicago Cubs player and broadcaster Ron Santo has passed away at the age of 70 due to complications from cancer.  Santo will be remembered as perhaps being the one person who most epitomized his beloved Cubbies.  He played 14 years for the Cubs, was a 9 time All-Star, and his #10 was only the third number retired by the team in 2003.  His missing plaque in Cooperstown is a travesty.  In 1990, Santo went to the broadcast booth as a radio announcer for the Cubs and WGN.

Outside baseball, Santo was also known for his near life long battle with diabetes and his charitable work to raise awareness and money to fight the disease.  He lost both of his legs to diabetes several years ago.  Even as his health faded, his ability to broadcast Cubs games was his admitted therapy.

As a player and as an announcer, Ron Santo lived and died with the Chicago Cubs.  He may have been a huge homer, and he may have not known some of the players or game situations all the time, but he was perfect for the Cubs.  Santo was everything a Cubs fan could ask for because he bled for the team as a player and a broadcaster.  He famously screamed “NO!” when Brant Brown infamously dropped the ball in 1998 and would take the listener along on the roller coaster of emotions of being a Cubs fan.

The home announcer is perhaps nowhere more important than in baseball, where you meet nearly every night throughout the season.  The marriage between Ron Santo and Cubs fans was a perfect one because they shared so much together.  Even though you might have never met him as a listener, you felt like you knew and loved Ron Santo.  He’s one of the most beloved icons in baseball and will surely be missed.  You can see just a little bit of this love for Santo below in the trailer for a 2004 documentary about his life, “This Old Cub.”