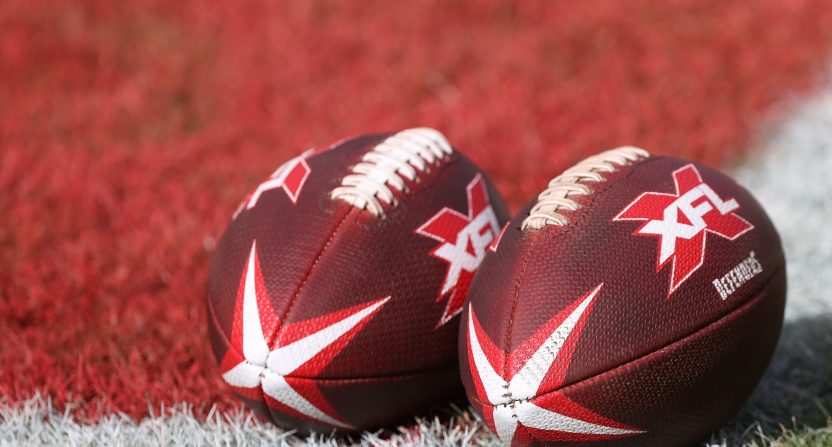 Circumstances differ drastically, but the second incarnation of Vince McMahon’s alternative football league, the XFL, may have met its end 19 years to the day the original version suffered an irreparable blow.

XFL 2.0 announced Thursday afternoon its suspension of the inaugural season, following both Center for Disease Control recommendations and the lead of other sports organizations, in response to COVID-19.

But while the NBA and NHL will resume at some point, and the NCAA will again host March Madness, a re-return of the XFL is less assured.

Alternative football leagues historically have a short shelf life. The Alliance of American Football, the most recent example, came and went so fast that its existence feels more like a fever dream than reality just a year later.

The USFL started to gain some foothold early in its existence in the 1980s, before being intentionally sabotaged by…the man now overseeing measures to contain the spread of coronavirus.

Between the two, there’s the original XFL and its one season played out 19 years ago. Now, the 2001 edition of the XFL was one of the most spectacular failures not just in terms of professional football, nor merely in sports history, but in the pantheon of network television.

Seriously. In a decade that gave us such TV disasters as Joey, Emily’s Reasons Why Not and The Osbournes Reloaded, the hype-fueled rise and almost instantaneous crash of XFL 1.0 earned special recognition for its ineptitude from outlets like TV Guide.

The problems that plagued the original XFL — poorly played football, contrived and embarrassingly ill-fitting wrestling storylines forced into telecasts, a salacious style that was too sleazy even for the shrill early Aughts — were already contributing to the league’s quick demise before owner Vince McMahon appeared during the March 14, 2001 On the Record with Bob Costas.

The show was arguably the most memorable and widely discussed of any HBO Sports program ever produced — at least, until Artie Lange’s drug-fueled and expletive-laden tirade essentially killed Joe Buck Live in its first episode eight years later.

Before then, however, McMahon’s sit-down interview was the standard-bearer for controversy.

Really, it was a fitting microcosm for the failure of the original XFL. McMahon morphed from Vince McMahon: Founder and head of a professional football league, into Mr. McMahon, the bombastic bad guy who headlined World Wrestling Federation storylines in that era.

The muscle-bound McMahon jabbing his finger in the air, inches from the diminutive yet unflinching Costas, provided a fitting avatar for the fish-out-of-water nature of the WWE (then-WWF) head trying to break into legitimate sports.

To McMahon’s credit, XFL 2.0 seemingly learned from its forerunner. This new incarnation doesn’t face an uncertain future for the same reasons the original died, but there’s an odd prescience in McMahon’s statements made to Costas almost two decades ago.

BOB COSTAS: XFL ratings are down 75 percent from Week 1. They now rival the lowest ratings ever in prime time — not just for a sports programming, but for any television show. Can you guarantee me right now that there will be a Year 2 for the XFL?

(Queue up Alanis Morissette on this one, given the nature of the new XFL’s suspension. But I digress.)

COSTAS: Well, you’re pretty sure about that one.

McMAHON: Uh, yeah. And I’m pretty sure about the continuation of the XFL, in one form or another.

Revisiting McMahon’s comments “about the continuation of the XFL” in 2001 adds an odd deja vu to the last line of Thursday’s league statement regarding the COVID-19 suspension.

It’s here where reiterating the nature of the current XFL’s suspension and the original’s failure is necessary, even with the similarity in public sentiments amid uncertainty.

The current situation qualifies as an act of God — a remarkable coincidence for the XFL, given “God” lost a wrestling match to McMahon in 2006.

Did I mention the Aughts were a culturally shrill and sometimes skeevy decade? The less said about McMahon “wrestling” “God,” the better.

However, it does provide a fitting snapshot for the far grimier product McMahon’s WWF and WWE offered until 2008.

XFL 2.0’s much-improved image when compared to the original somewhat parallels the efforts McMahon made to reimagine WWE as a family-friendly product late last decade. But the On the Record interview again looms large in retrospect.

COSTAS: Are the XFL and the WWF completely separate, or, are you so associated in the public’s mind with both that a big failure here reduces some of the juice that you have in other areas?

McMAHON: No, not at all.

The XFL’s short, first life coincided at an interesting time in McMahon’s primary venture. After languishing in the first half of the 1990s from the heights reached in the 1980s, professional wrestling boomed in the late ‘90s.

By spring 2001, WWF’s flagship programs — Raw and SmackDown — drew astounding 5.7 and 4.9 ratings. Those numbers are made all the more impressive given Raw aired on TNN, which just a few months prior rebranded from “The Nashville Network,” and SmackDown appeared on UPN, which no longer exists.

That was also the peak of the company’s cultural reach and popularity.

A variety of factors contributed to a downturn in WWF/WWE visibility. Empirical evidence suggests McMahon’s acquisition of World Championship Wrestling from Turner Broadcasting amid its merger with AOL/Time Warner, just weeks after the infamous On the Record appearance, played the most significant role in pushing away fans who have never returned. But that’s a topic for another time.

In addition to the suspension of the XFL, McMahon faces a similar quandary with regard to next month’s scheduled WrestleMania. The annual supershow is a chief revenue-driver for the company, and its possible cancellation comes at a most inopportune time.

Today the stock price is hovering at around $32.

Vince’s piggybank (28 million remaining shares) to keep funding the XFL has shrunk by over 60% in less than a year. https://t.co/rxL4nlMM0f

XFL 2.0 may have successfully distanced itself from wrestling in terms of image. Until the fledgling league becomes self-sufficient, however, its existence is tied to WWE.

With or without COVID-19, WWE’s tumbling stock price only raises the same question Bob Costas posed to Vince McMahon 19 years ago: Can you guarantee that there will be a Year 2 of the XFL?