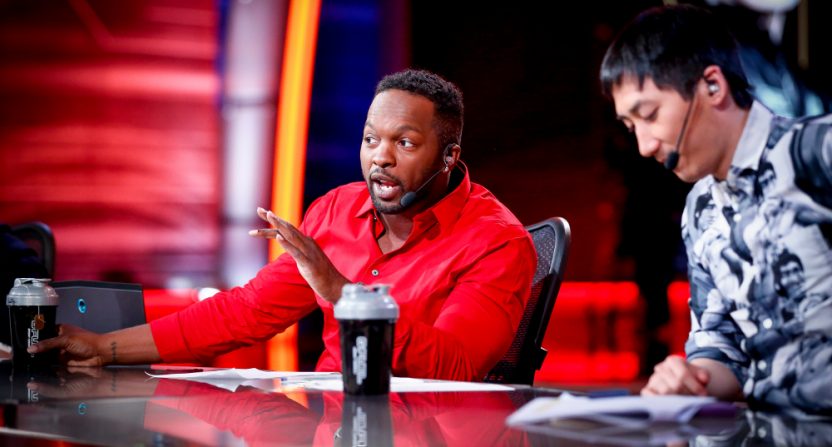 Turner and IMG’s ELEAGUE found some success with broadcasts of Counterstrike: Global Offensive in seasons one and two, but their next big eSports event is in a different genre entirely; fighting games, specifically Street Fighter V. It’s the latest evolution of the famed arcade and console game, and 24 of the world’s top competitors will be battling for eight playoff spots, $250,000 in total prize money, and the overall championship. The preliminary rounds of the ELEAGUE Street Fighter V Invitational have wrapped up, the rosters are set, and the regular season will kick off tonight with Group A coverage. Coverage starts at 6 p.m. Eastern on digital platforms (live.eleague.com, Twitch and YouTube) and then leads into a special TV showcase on TBS at 10 Eastern.

One of the ELEAGUE analysts here is renowned fighting game commentator Steve “Tasty Steve” Scott (seen at left above with fellow analyst Zhi “Zhieeep” Liang Chew), who took the time to answer some Awful Announcing questions this week about his background, the game, and what viewers should be watching for. Here are our questions and his answers.

Awful Announcing: How did you get into fighting games in the first place?

Steve Scott: I used to go all the time to stores to play, but many of the times I went, there was nobody there. Later, my uncle started bringing the games over [to where I lived], and my goal was always to beat him, but [at first] I never could.

AA: What led you into broadcasting/commentating on fighting games?

AA: How did you get involved with TBS and ELEAGUE?

SS: Turner contacted me just after the Lupe Fiasco album release party. One thing lead to another, they told me they were behind ELEAGUE, and that it was professional gaming on television. I was impressed.

SS:  Street Fighter V is a great fit for ELEAGUE because it translates so seamlessly. It’s really easy to understand Street Fighter V. Don’t get me wrong: there are some things that people will look at and say, “I don’t know what that is,” but the fact of the matter is, it’s very plain to see, much like boxing – except people don’t get hurt because it’s a video game. You get to see all of that ferocity [of boxing] put into playing, and then it turns into a different game. It’s very point-and-click. You say, “hey, we’ve got two characters, life bars, and a timer: what’s going to happen first?” Either one person will lose because they have less life, or they’re going to knock the opponent out. It’s so easy to understand.

AA: What should viewers know about the game?

SS: Viewers should know that there is no team representation [as in traditional sports]. You’re playing for yourself, so the competition is in its most raw form. You don’t have to worry about anyone else not playing their hardest. It’s real skill on display. As a viewer, to watch Street Fighter V, all you should know is that, yes, it’s digital, but that’s a real fight. It’s a mental fight more than anything.

AA: What should viewers be watching for during the broadcasts?

SS: Viewers should be looking for those intense moments when life is low and there are hits going back and forth, and there’s a lot of movement on the screen. That’s what you’re looking for, because in that instant, one person is sure that they have the other person figured out – and you’ll know just how right they are once you see the outcome of the match.

AA: How will you balance speaking to a hardcore audience versus speaking to new fans who tune in?

SS: One of the things I always strive for [as an analyst] is understanding – whether it be on the expert side or on the newcomer’s side. To [be an analyst], you have to be able to communicate in general, and for that, people have to feel comfortable. Turner brings a great platform for making people feel comfortable with the game. I mean, it’s video games. Watching and describing and letting viewers take it in along with [myself and the other analysts] is a really organic feeling. [With ELEAGUE], it has all of the glitz and the glamour, and the underlying game is still so easy to get into.

Thanks to Steve for his time. You can follow him on Twitter at @Tasty_Steve, and you can check out the ELEAGUE Street Fighter V Invitational tonight (Friday, April 7) starting at 6 p.m. Eastern (digital platforms) and 10 p.m. Eastern (TBS). Further group stages will take place on April 21, May 5 and May 12. For more info, check out eleague.com. Photos courtesy of Turner Sports/ELEAGUE.