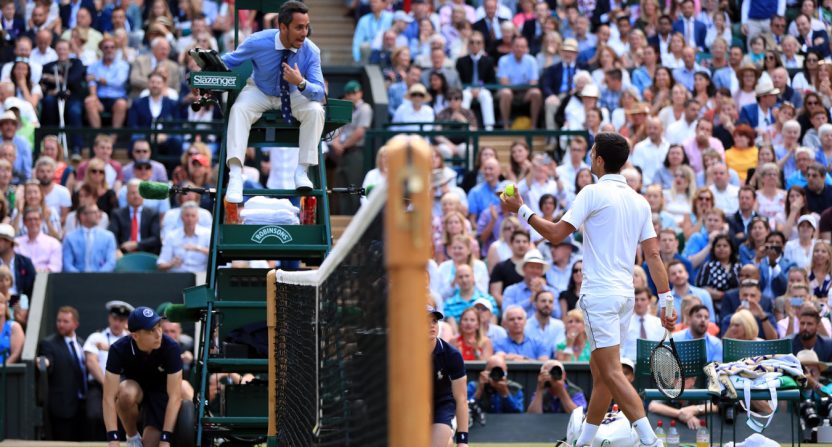 To be an umpire at a Grand Slam final, you have to be one of the best at your craft and be on top of your game. Damian Steiner was the chair umpire for the classic Wimbledon Final between Novak Djokovic and Roger Federer.

Despite what seemed like a great performance from Steiner, he was fired by the ATP a couple weeks ago. According to the New York Times, Steiner was fired after giving several unauthorized interviews in his native Argentina without getting permission from the ATP.

Typically, interviews with umpires and officials are either frowned upon or illegal, in order to keep a sense of impartiality. There’s an argument that opening up officials to interviews and allowing them to give their side of a controversial call or admit a mistake would increase transparency, but many sports leagues are leery of allowing anyone but a head of officials to talk to the media about tough calls.

For example, the US Open is allowing the media have access to the chief umpire and tournament referee, but specific chair umpires remain off limits.

Demand for Steiner in Argentina was huge because he was the first Argentinian to be a chair umpire in a Grand Slam singles final. The ATP found that Steiner “gave more than a dozen interviews” in Argentina, where topics sometimes delved into taboo topics that probably wouldn’t have been approved by the ATP.

According to the New York Times:

““Much of the content of Steiner’s media interviews were a direct violation of the standard protocol in place whereby officials must refrain from discussing specific incidents or matches, individual players, other officials, or rules, in the interest of maintaining impartiality at all times,” the ATP said in a statement, confirming the dismissal after an inquiry.”

“In one of Steiner’s interviews, with the podcast “3iguales,” he recommended a series of rule changes. They included restricting the use of towels during play, abolishing the service let and allowing some form of in-match coaching.”

“In another interview, with Radio Continental, Steiner said he believed that Federer was going to win the Wimbledon title when he had two match points late in the fifth set of the final against Djokovic.”

While Steiner has lost his job, he still has his gold badge status as an umpire, which theoretically means he can still work non-ATP events and Grand Slams. But considering the ATP controls most tennis events, and even got to pick three chair umpires for the US Open, Steiner isn’t at Flushing. Time might eventually heal wounds, but as of now, Damian Steiner is on the outside looking in.