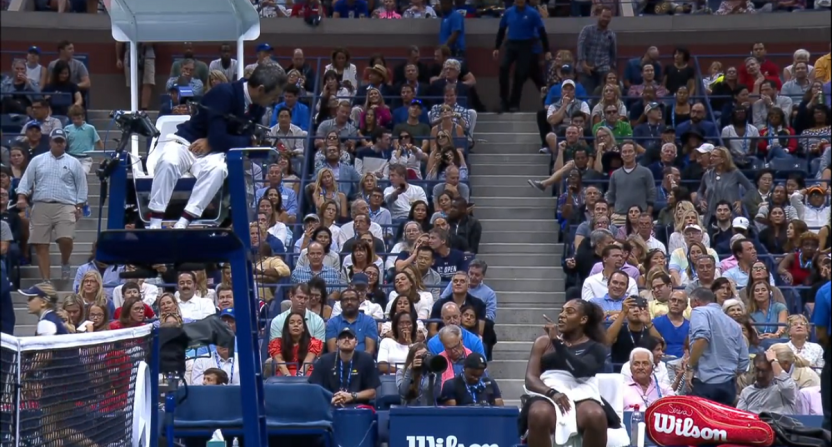 The U.S. Open women’s final was a hell of a match, while it was played. Naomi Osaka came out firing, taking the first set 6-2. Then, after receiving a coaching violation warning in the second set and registering her complaint with chair umpire Carlos Ramos, Serena came to life, and both women traded breaks.

Serena vented her frustration on her racket, but as that was her second violation, she lost a point heading into the next game:

Serena lost that game, and the discussion bled over to the changeover, and Serena called Ramos a thief.

That was Serena’s third violation, meaning she was assessed a game penalty, in the final of a Grand Slam. It put Serena down 5-3, and after a lengthy discussion with tournament officials, Serena continued to play. She held her serve, but it still meant she was down 5-4, and Osaka did what she’d done for most of the match: hit expertly placed serves.

Serena’s point with tournament officials was that men get away with a lot more in terms of what they can say to an umpire without repercussions, and she’s definitely right. There’s also the point that Ramos could have understood the moment, and the emotion involved from the players, and been a bit tougher than to lean down to his microphone and essentially guarantee Serena’s defeat with the verbal abuse penalty given the relative lack of severity of Serena’s comments.

Most blameless: Naomi Osaka, who played phenomenal tennis in what amounted to a hostile road environment; multiple times she aced Serena beautifully to essentially zero applause. Tom Rinaldi was booed for opening the trophy celebration:

To her endless credit, Serena didn’t even bother with Tom Rinaldi’s on-court question, instead taking the moment to congratulate Osaka on her play, and to implore the crowd to be positive and give Osaka the credit she deserved.

Osaka as well clearly felt uncomfortable winning the way she did, also blowing off Rinaldi’s opening question a:

What a weird, unfortunate way for the U.S. Open to end.