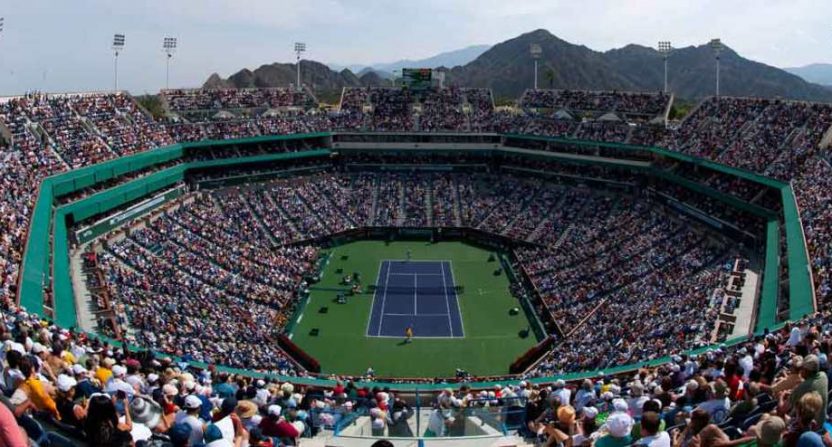 The BNP Paribas Open released a statement on Sunday night that the tennis tournament “will not take place at this time” due to a confirmed case of coronavirus in the Coachella Valley. The tournament was scheduled to take place March 9-22 at the Indian Wells Tennis Garden.

The BNP Paribas Open — also known as the Indian Wells Masters — is the most attended non-major tennis tournament in the world, and was set for heavy televised coverage in 2020.

The tournament’s official website deleted the TV schedule just minutes after releasing the statement on the cancellation, but a recent press release says that there were “more than 130 total hours of live action” planned to be televised on Tennis Channel and the ESPN family of networks.

Over 30 of those hours were planned for the ESPN networks, beginning on March 17:

More than 30 hours of live action of the BNP Paribas Open will be televised on the ESPN family of networks, beginning on Tuesday, March 17 with coverage on ESPNews. Live coverage will continue Wednesday, March 18 and Thursday, March 19 on ESPN2. On Friday, March 20 the men’s quarterfinals will appear on ESPN, while one of the women’s semifinals will be on ESPNews. Both men’s semifinals will be broadcast live on ESPN on Saturday, March 21. The championship matches will air back-to-back on ESPN2 beginning at 1:00 pm local time (4:00 pm ET) on Sunday, March 22. Chris Fowler will lead ESPN’s on-air team, joined by Brad Gilbert, Darren Cahill, Chris Evert, Cliff Drysdale, Bethanie Mattek-Sands and Rennae Stubbs.

The BNP Paribas Open was already going to be without Roger Federer (knee surgery), who’s won five titles at Indian Wells. Federer lost to Dominic Thiem in the 2019 men’s finals, while Bianca Vanessa Andreescu was the champion on the women’s side.