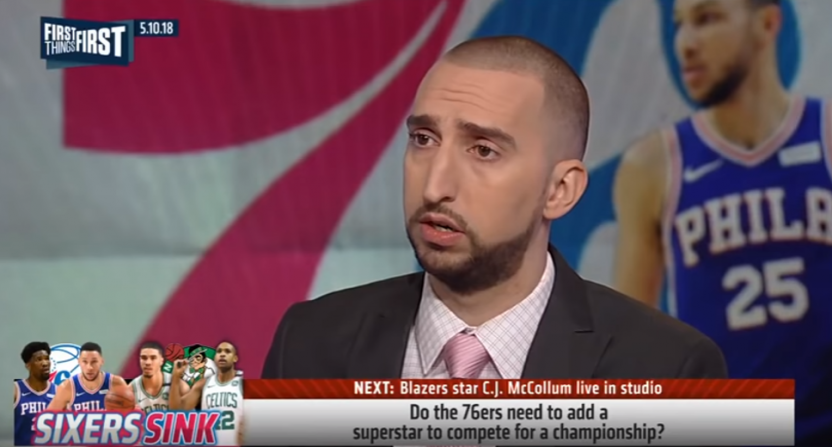 FS1 First Things First co-host Nick Wright has a long background in the world of sports radio, spending five years on the dial in Kansas City and then four (with some national work as well) in Houston. Now, he’s returning to that (while continuing his TV work for Fox), and doing so on a national scale with SiriusXM. Here’s more from Sirius’ release:

“I couldn’t be more excited to be back hosting a daily radio show and look forward to talking all things sports with SiriusXM subscribers across the country,” said Wright. “Mad Dog Sports Radio is a widely recognized national radio brand and boasts an excellent lineup of hosts that I’m honored to join.”

Wright tweeted about the move as well:

Some news: Starting Tuesday, in addition to of course continuing on @FTFonFS1, I'll be hosting a new show, What's Wright with Nick Wright, M-F on @MadDogRadio from 6-8pm.

I couldn't be more excited & grateful for the opportunity. Should be a ton of fun.

Back in 2017 after his First Things First role was announced, Wright told AA radio was crucial to getting him to this point:

“There’s no way that I’m here without it. In Kansas City, I did weekends, then nights, then middays, then afternoons in a five-year stretch. Every single time, the show was “What’s Wright” with Nick Wright, and I was on the air totally solo. In Houston I had a partner in John Lopez, but I also did a solo national show on CBS Sports Radio. The reality is, I didn’t play in a league.

…I don’t have an amazing voice, I’m not the guy you look at and are like ‘I bet he’s a TV guy,’ I didn’t play in a league, I’m not the son of a broadcaster. So why am I where I am? Because I did that local radio, by myself, for years, where the only way folks are listening is if you can be so compelling and so informed that they have to. So I just learned things. I learned how to retain a lot of convoluted statistical information and then convey it in a non-convoluted way and do it without looking at notes.”

So it’s cool to see him going back to that while still maintaining his TV role. We’ll see how this move works out for him and for SiriusXM.