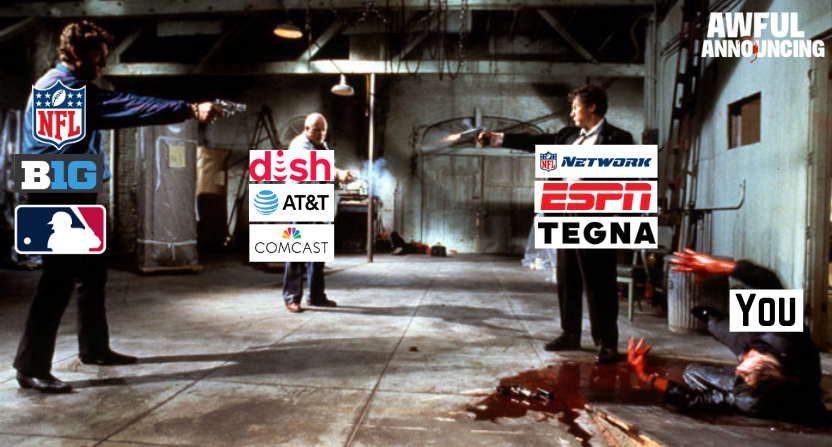 Over the last two years, I’ve paid for some of these random TV-related items, as have some of our readers.

With RSNs, sports channels, and local network affiliates more commonly being blacked out via carriage disputes, what have you had to purchase to ensure you've the games you prioritize watching in addition to any existing cable/sat service you have?

For the past two football seasons, I’ve added some month to month version of Sling, Fubo, and YouTube TV to fuel my football addiction. The free trials help me feel a bit better about doing it but then they start to renew and I feel guilty for being such an addict.

My addiction to my favorite sport is shared as me and my girlfriend watch 25 hours or so a week. Daily fantasy, regular fantasy, betting, and our favorite teams, it’s pretty extensive and to the point it’s not a question of if I’ll pay to unlock additional football but when, and what service. How did it come to this?

For almost my entire adult life I had DirecTV and despite some bumps in the road with no Pac-12 Network and a small window when NBC Sports Network wasn’t carried, I never felt the need to get my wallet out and find a way to circumvent my cable/sat provider to get a channel or a game.

But in 2018, I moved into a condo building that required me to switch to Uverse, AT&T’s unloved step child. For awhile, things were fine. It even had Pac-12 Network and the Longhorn Network so I was actually ahead in some ways. I said goodbye to paying for the Sunday Ticket as $400 is bullshit when I mostly just watched Redzone which I was now getting a decent but inferior version for basically free. But then it started.

NFL Sunday Ticket is absurdly overpriced, illogically packaged, and pushes fans away from the league

First, the Pac-12 Network went away which would have been fine but I suckered a poor old Stanford football fan into cohabitating with me. Not long after the rug got pulled out from me even further with both the NFL Network and NFL RedZone going away as part of an ongoing pissing match between AT&T and the NFL mostly pertaining to disagreements with DirecTV’s Sunday Ticket deal.

Gone were Thursday Night Football games and Sundays full of Red Zone which is much needed for a transplant in Ohio and being subjected to large doses of Browns and Bengals games was just not acceptable. I needed a fix bad and I gave in.

The streaming services know people like me are coming too. They stash the channels you need across different packages so you have to buy the biggest package possible. Prices keep moving up too. The $30 entry level packages are long gone. If you want the fix you need, it’s going to be $70 because you’ve been upsold to most expensive package possible. If you’re smart you’ll call your cable/sat company to complain about your missing channels. Doing so under the guise that you’re cancelling will usually save you $500-$1000 a year. That more than enough pays for a few months of whatever streaming package you’ve paid for but it’s still a hassle to claw back money from one cable company to give to another.

As our poll showed, it’s not just extra streaming packages. Digital antennas are a good way to get back dropped network affiliates and league streaming packages from MLB, the NBA, and the NHL are an easy way to bypass RSN blackouts or just avoiding cable altogether although blackout policies often make that a treacherous road to go down.

Tonight my family and I are learning Spanish while watching football… @DIRECTV & @TEGNA still arguing over money #CorporateGreed pic.twitter.com/XZ4ORkVJ9j

I thought in time Uverse would work it out and I’d be free from double dipping. Nobody really wins these pissing matches with the NFL. Unfortunately it’s only gotten worse. NBC went away for a few months earlier this year. I’m now entering weekend number two without my local CBS. And it’s not just football as both these channels were my preferred local news outlets and also had national programming I DVR like 60 Minutes so this effects far more people than just sports fans clamoring to watch a game.

This site used to write about a prominent carriage dispute once every few months. They were usually resolved quickly and before major sporting events occurred. Neither the channels nor the distributors seemed to want to ruffle customers. We’ve now entered into a new normal where channels come and go with no service really being a safe harbor from dropping a channel without little warning that has the game you are counting down the days to watch.  In years past you think cable companies would not want to be without big games like the SEC Championship game or multiple weekends of NFL games with in state teams. The new normal will continue to get worse.

DISH took away college football on BTN and FS1, including coverage of Ohio State games. Millions will even lose their local FOX station. Don’t wait!

50% of the respondents in our poll don’t pay the ransom. I envy them. In a pre pandemic world, you could go to a bar or a friend’s house. You could also just find an illegal stream if you were technologically savvy and morally flexible enough. But nearly half of you are with me. Giving in because we indulge our addiction to the sports, teams, and games we can’t live without. It’s only going to get worse too. In the last year, I’ve signed up for Flo Sports, Big Ten Network+, ESPN+ and MLB.TV for periods of time to get random things I’ve wanted to watch. More and more programming we are used to watching on normal cable or broadcast TV are migrating to these streaming services with the knowledge that enough of us are addicted enough to take out your wallet, enter your credit card info, and hopefully let it renew month after to month long past the period you really “needed” it.

We’re complicit customers in all of this and it’s only going to get worse. If the never ending carousel of carriage disputes has taught us anything it’s that for many, sports fandom has no monetary limit and neither does corporations willingness to piss off customers in search of profit margins. This is all by design. It’s the increasing friction of capitalism as the cable bundle shrinks while sports leagues look for more money to televise their games. Regardless if we pay the ransom, we’re all hostages in this new normal.