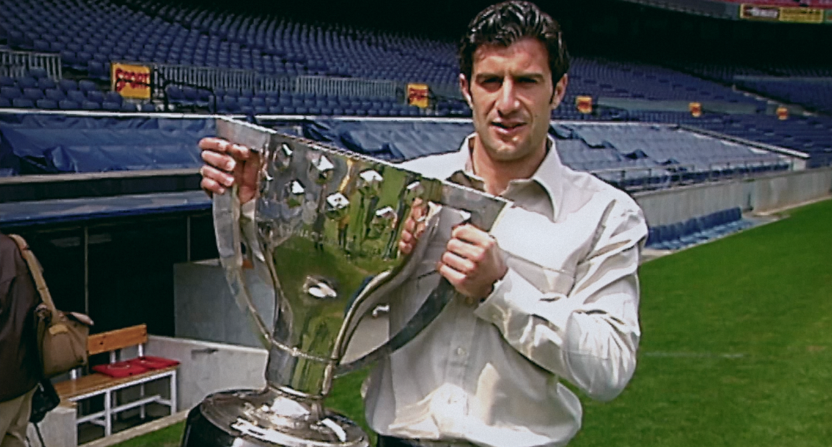 Somebody is lying. Maybe everybody to a degree.

At the very least, it appears as if several people in Netflix’s The Figo Affair: The Transfer that Changed Football (available now on the streaming service) might be playing it fast and loose with the facts. They all have their interpretations of what happened in 2000 when Luis Figo (seen above in a production still) stunned the soccer world by leaving FC Barcelona for archrival Real Madrid.

The Figo Affair aims to get closer to the truth. The move was shocking for numerous reasons. First, it set a world record with a €62 million ($63 million) transfer fee. Second, all sorts of shady backroom dealings put this plan in motion. Third, Barcelona and its fanbase felt betrayed. They argued that Figo at best misled them and at worst flat-out deceived them.

In this documentary, everybody tries to portray themselves in the best possible light. Fingers are pointed, accusations made. But in the end, Figo and Real Madrid were the big winners. He was the recipient of the 2000 Ballon d’Or trophy and led his new club to the Champions League title in 2002 and two La Liga titles. If Figo and Real Madrid had to break some Barcelona hearts along the way, call that collateral damage.

Luís Figo. Florentino Pérez. 22 years later, the people at the centre of one of Europe's most controversial football transfers tell their stories.

The Figo Affair: The Transfer that Changed Football, coming to Netflix 25 August. pic.twitter.com/7G1yMEVHiw

America has plenty of sports Benedict Arnolds. Brett Favre joined the Minnesota Vikings. Rick Pitino coached the University of Louisville. Kevin Durant signed with the Golden State Warriors. They all caught flack for it. None of that compares to the vitriol endured by Figo. You could argue that he’s the most infamous sports traitor of them all.

But the business of sports often gets in the way of the emotion of sports. And sports is a huge business. No matter how loud the applause, decisions can be made that can quickly turn cheers into boos.

The Figo Affair takes us inside an audacious plan to woo Barcelona’s favorite son. The documentary, directed by David Tryhorn and Ben Nicholas, is highly entertaining because it plays out like a heist movie. In this narrative, Figo is more of the MacGuffin than the bad guy. The real supervillain is Florentino Perez, who helped orchestrate an elaborate plot. Perez is currently the Real Madrid president, but at the time he was a candidate who made promises to lure big stars to the club.

There are some twists and turns with a lot of money at stake. But the ends justified the means as Perez assumed power and got his man. The biggest mystery remains: what did Figo know and when did he know it? There were allegations of a secret deal before Perez’s victory. Figo denied this and still does. What is clear is that he felt underappreciated by Barcelona.

In The Figo Affair, then-Barcelona president Joan Gaspart retells the now famous story of how on the eve of the shocking announcement Figo called him at midnight asking for more money immediately. According to Gaspart, a vacationing Figo said “I’ve got two tickets. One’s from Lisbon to Madrid and the other’s Lisbon to Barcelona. Whether I’ll be using the Barcelona ticket depends on you.”

Gaspart said he told Figo could not grant the request, especially at that late hour. The next day Figo was off to Madrid. In the documentary, Figo denies issuing an ultimatum, calling it “a lie.”

It’s noteworthy that in the Real Madrid press conference, Figo looked unemotional and distant. He seemed to force a smile as photographers took pictures of what should have been a joyous event. Figo now admits that he wasn’t in the “frame of mind to express my happiness.”

The reaction from Barcelona fans was hostile. “Traitor” and “Judas” were some of the nicer words he was called. The anger reached a crescendo when Figo returned to Barcelona for the first time as a member of Real Madrid. It was an unbelievably hostile environment as fans chanted ugly words about his wife and mother. Figo was pelted with objects, including a pig’s head. And Real Madrid lost 2-0.

Figo lost the battle but won the war. He enjoyed a successful career with Real Madrid and his transfer ushered in a new way of doing business. Perez brought in other huge names such as Beckham and Ronaldo. These high-priced additions were even given a nickname: Perez’s “Galacticos.”

The Figo Affair is a compelling look at how the business of sports often gets done. It’s sometimes complex, clandestine, and ruthless.

NOTE: The Figo Affair is a Spanish-language production with English subtitles.