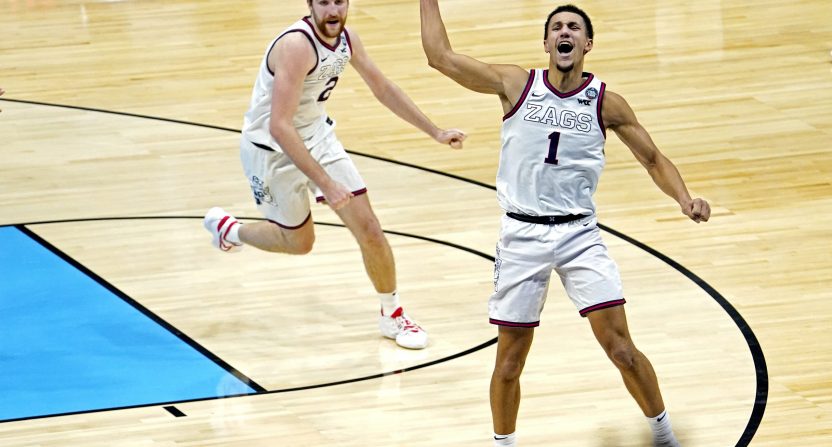 In an NCAA Tournament instant classic, the Gonzaga Bulldogs beat the UCLA Bruins 93-90 on Saturday in the Final Four. It was an unbelievable basketball game featuring No. 11 seed UCLA — whose incredible Final Four journey began in the First Four — and tournament favorite Gonzaga, and it ended in appropriately insane fashion.

UCLA’s Johnny Juzang — who scored 29 points — tied the game 90-90 with 3.3 seconds remaining in overtime. But Gonzaga star freshman Jalen Suggs responded with an all-timer, banking in a long three-pointer to beat the buzzer and send the Bulldogs to the national championship game.

Naturally, the Gonzaga IMG radio team of play-by-play man Tom Hudson and color commentator Adam Morrison went absolutely bonkers after the Suggs shot went in. It’s particularly fitting that Morrison was on this call. After all, he was on the heartbreaking side of things as a player when UCLA stunned Gonzaga with an incredible comeback in the NCAA Tournament 15 years ago. That time, he cried in disappointment. This time, he screamed over and over in happiness.

Here’s how it sounded on the CBS broadcast, with Jim Nantz, Bill Raftery, and Grant Hill on the call.

Raftery: “There are onions, Jim. And then there are MAJOR onions! With a kiss!”

And here’s the Spanish call:

Madness at its best pic.twitter.com/iqXP2hEusw

WHAT DREAMS ARE MADE OF❗️❗️@ZagMBB & Jalen Suggs are on to the #NationalChampionship with this overtime game-winning buzzer beater❗️❗️@KevinKugler, @JimJackson419 & P.J. Carlesimo had the call in Indianapolis.#UnitedWeZag | #FinalFour pic.twitter.com/Hn3yEuNPD9

Gonzaga fans will surely be listening to these calls — especially the Hudson/Morrison call — for a long, long time.

And this Gonzaga team has a chance for another unforgettable moment on Monday night, when they try to win their first championship in school history. It should be a fantastic basketball game featuring the two teams that have been viewed as the best in the country for months now, and maybe it will include another amazing finish.

Update: So we shared the Gonzaga call; how about the radio team on the heartbreaking side? Josh Lewin and Tracy Murray were on the call for the UCLA IMG Radio Network.

Lewin: “Cry in your pillow! Unbelievable!”