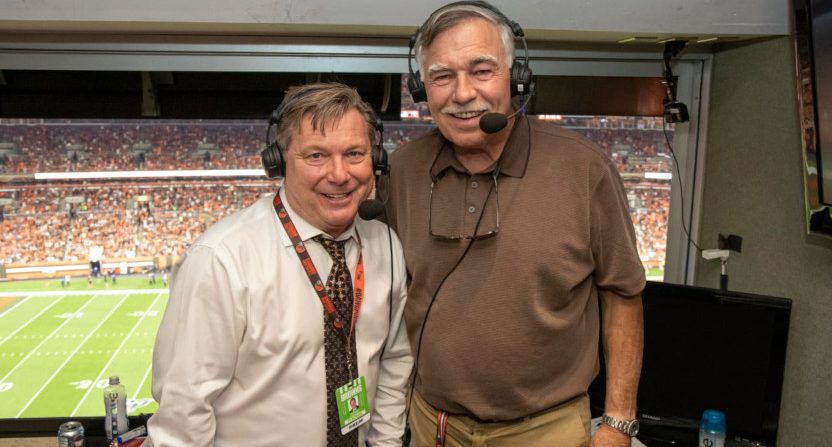 It’s always remarkable to read about announcers who have spent an entire career with one team, and even by those standards, Doug Dieken stands out. Dieken was drafted by the Cleveland Browns as an offensive tackle in the sixth round of the 1971 draft, and he’d spend his entire playing career with them from that year through 1984. He then moved into the broadcast booth as a radio analyst in 1985, and has held that position since.

That’s perhaps especially incredible considering the many ups and downs of the Browns over the years. In fact, Dieken’s run comes with a three-year hiatus from 1996-98 when the Browns didn’t exist (the old Browns franchise moved to Baltimore and became the Ravens in 1996, but the Browns’ return in 1999 included the NFL considering that new expansion draft-stocked team the actual continuation of the old franchise). But Dieken returned to the booth for the team’s 1999 return (he’s seen at right above with play-by-play announcer Jim Donovan, who’s been calling games with him since that 1999 return), and has been there since. On Tuesday, he announced he’s retiring after this season:

Sunday’s season finale will be Doug Dieken’s final game inside the radio booth.

The #Browns Legend is calling it a career after 50 combined years as a player, radio color analyst and exemplary ambassador for our organization.

Dieken had some notable comments on this in a piece on the Browns’ site, as did Donovan and Browns’ owners Dee and Jimmy Haslam. Here are those:

“It’s been a great ride” Dieken said. “I want to thank the Browns’ fans for accepting me first as a player and then as a broadcaster. I’ve had the most fantastic teammates on the field, in the radio booth, and in the community to make the last 50 years fun. We didn’t get the wins we all hoped for, but I feel like I’m leaving a winner because of my association with the organization and the great fans who listen to our broadcasts.”

The Browns will honor Dieken during Sunday’s regular season finale against the Bengals at FirstEnergy Stadium.

“It’s hard to think of a Cleveland Browns game without Doug Dieken being a part of it, and it’ll be very difficult for me to look to my right and not see him there,” Donovan said. “For 23 years, it’s been amazing having him alongside to call games on the Browns radio network. He was a great player, and he’s a Browns legend, and he’s a great broadcaster that fits so well with what the Cleveland Browns are all about. He’s connected with their fans, and it’s going to be a big adjustment for all of us come next season when he’s not there.”

…”Doug Dieken has been a great representative of the Cleveland Browns for more than 50 years, and all he’s done for our organization is greatly appreciated,” said Dee and Jimmy Haslam. “To have a career as he did on the field with the record number of consecutive games played and then become the steady and consistent voice he has been in the radio booth is genuinely remarkable. Doug has that uncanny ability to connect with people. He did it on the field and in the locker room with his teammates, he’s done it in the community with the people of Northeast Ohio, and he did it so well on the airwaves with Browns fans. Doug is the consummate professional. He is the Cleveland Browns, and his legacy will not be forgotten.”

Drew Carey even had a notable story a few years back about serving Dieken at a restaurant during Dieken’s playing days:

And here’s a fun video from 2015, with then-Browns tackle Joe Thomas interviewing Dieken:

Dieken certainly made a remarkable impact on the Browns over the years as a player and as a broadcaster. Here’s wishing him the best in retirement.