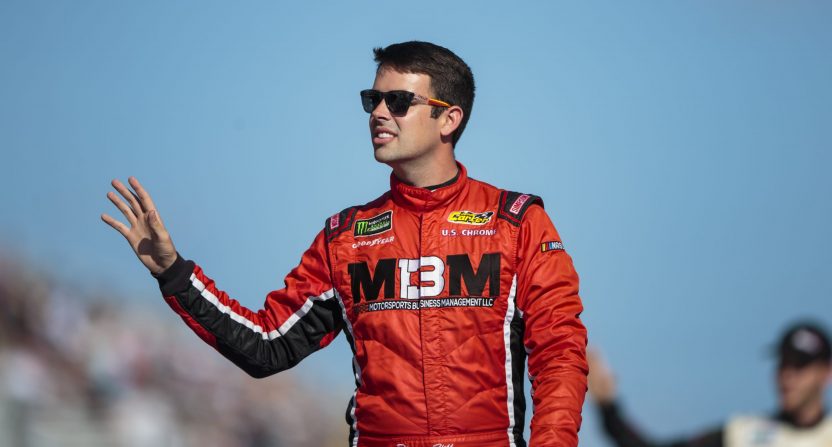 For Timmy Hill, the eNASCAR iRacing Pro Invitational Series wasn’t just for having fun. It was a crucial opportunity for a driver who has raced for underfunded teams his entire career to show what he can do against the best in NASCAR on an equal playing field in front of a national audience.

Hill took advantage of the opportunity last year, winning the virtual Texas race and finishing in the top three in six of the seven races. The series is back for a second year and FS1 will air the first five races while NBCSN will air the last five. NASCAR unveiled the entry list for Wednesday’s race on the Bristol dirt track and Hill’s name wasn’t among the 38 participants.

In responding to a tweet from Fox’s NASCAR account that even mentioned Hill as a former winner, Hill said, “Compete in every cup event the last 2 seasons and the only cup driver that was left out… stings a bit.” Because of this decision by Fox and NASCAR, Hill told Frontstretch that MBM Motorsports is expected to miss real life races due to a lack of funding they thought they were going to get from the national exposure of the Pro Invitational Series.

Compete in every cup event the last 2 seasons and the only cup driver that was left out… stings a bit. https://t.co/EGMI4NuNey

If that wasn’t bad enough, the idea of how NASCAR and Fox set the 40-car field has been a bit of a mess. The 36 charter teams from the NASCAR Cup Series get a spot while Fox, as the broadcaster, gets to invite up to four drivers.

Having guaranteed spots for the charter teams makes sense for sponsorship reasons but two top drivers from those 36 teams aren’t even racing. Brad Keselowski and Kevin Harvick will be replaced by Austin Cindric and Ryan Preece. Cindric is driving the #2 and is Keselowski’s teammate at Team Penske so that makes some sense. Preece is replacing Harvick because he’s a client in Harvick’s management company. Preece isn’t driving Harvick’s #4 or representing Harvick’s sponsors. Instead, Preece is driving his own #37 for JTG Daugherty Racing.

Fox’s decision making about the entire thing was even worse. They had the opportunity to invite up to four drivers for the race and they only invited Clint Bowyer and Dale Earnhardt Jr. Bowyer is Fox’s in-race analyst and Dale Jr. is Dale Jr. so it’s a no-brainer to have both of them involved. But Fox still has two spots left and while Hill isn’t going to move the needle ratings wise like Bowyer and Earnhardt will, he’s still a former winner in the series and is going to be a top competitor. If anything, Hill’s involvement is going to make for a great storyline during Fox’s broadcast. If Fox used all four invites, that’s one thing. But with two open spots, why let them go to waste?

As of Wednesday morning, there were over 6,000 tweets with the hashtag #LetTimmyRace. Maybe to Fox and NASCAR, excluding Hill wasn’t going to be a big deal, but this was very much an avoidable situation. While I don’t agree with everything NASCAR does, I agree with them on most things and when I don’t, I try to give NASCAR the benefit of the doubt. On this, I just cannot do that.

As much as I disagree when fans point at minor inconveniences and give the inaccurate claim that “NASCAR is dying,” I can’t blame those fans for thinking that when those in charge shoot themselves in the foot like this. I also can’t blame fans for thinking that Fox and NASCAR do not care about underfunded teams or the drivers on those teams. Hill revealed in the Frontstretch story that the team was “left out of the loop” and that “nobody [from NASCAR] will respond” to the team about whether or not they were going to be allowed to participate.

Common sense should’ve prevailed here, and there’s still time for Fox and NASCAR to make things right, but it’s another example of outside forces trying to suck the fun out of something that’s supposed to be fun. The eNASCAR iRacing Pro Invitational Series is supposed to be a bunch of drivers having a good time on iRacing and Fox and NASCAR are trying very hard to make people hate this when they make these kinds of decisions.

Here’s some free advice to anyone from Fox or NASCAR who might be reading this before tonight’s race. Whether it’s Fox using one of their two open spots or NASCAR creating a “past winner’s provisional” to get him in, just come up with something and #LetTimmyRace.

UPDATE: It appears Timmy Hill will race at the virtual Bristol dirt track. Austin Cindric, who was supposed to be racing in place of Brad Keselowski, offered up his spot to Hill. And with the blessing of Keselowski, Team Penske, and MBM Motorsports, Hill will be driving Keselowski’s virtual car.

I like where your heads at. Are you in @TimmyHillRacer? https://t.co/rMmnC6FL1l

Alright I’m in! I appreciate everyone’s support over the last 24 hours. All my fans out there put up the good fight! Looking forward to slinging some virtual mud tonight. Thanks MBM & Team Penske for allowing me to do this. https://t.co/Lii9i7qTFj