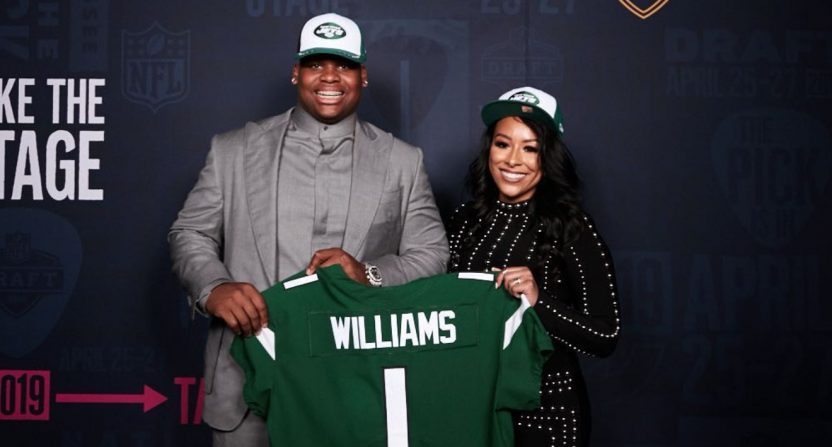 The partnership between rapper 50 Cent, aka Curtis Jackson, and premium cable channel Starz has been a lucrative one with the success of the series Power and its spinoff Power Book II: Ghost. (Three more Power spinoffs are in development, as well.)

But the celebrity producer and network want to branch out beyond the crime stories with two additional TV series. One will be a hip-hop anthology dramatizing iconic moments and infamous events, beginning with the feud between 50 Cent and The Game. The other will have a sports angle to it.

As reported by Deadline, the as-yet-untitled series is inspired by the life of sports agent Nicole Lynn, the first Black female sports agent to represent a top-five pick in the NFL Draft. Her client Quinnen Williams was selected No. 3 overall by the New York Jets in 2019.

The Starz series will portray the rise of a young Black woman attempting to break into the highly competitive — and very male — industry of sports agents and work her way to the top of her field.

Congrats to my guy, Jalen Hurts, on signing his rookie contract with the Philadelphia Eagles! I’m so honored to represent you and I don’t take a minute of it for granted. Time to show the world what it really means to be a #RAREBREED!

“It’s hard to know what jobs are actually in sports because there’s not a ton of exposure of women doing those jobs,” Lynn told Glamour‘s Macaela MacKenzie in 2019. “It’s such an uphill battle to be a sports agent in general, and more difficult being a woman, and I would say two times as difficult being a black woman and under the age of 30.”

Lynn signed her first football client in 2016 when she was just 26 years old. She currently represents more than a dozen NFL players, several football coaches, a handful of professional softball players, and a professional ballerina. And this year, she became certified to represent NBA players.

The series is being developed by writer Tash Gray, who worked on FX’s Snowfall and is part of the staff on Power Book III: Raising Kanan. Lynn will be an executive producer on the show.