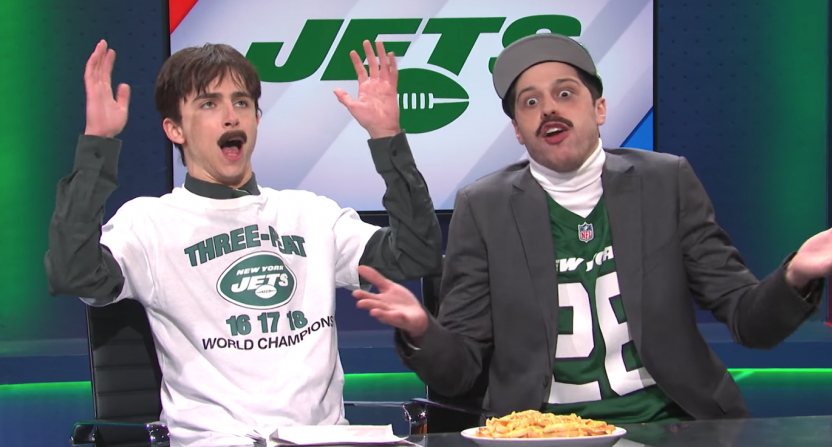 Newsmax has gained notoriety among political media and many who favor conservative politics during the 2020 presidential election and its aftermath. Donald Trump and his supporters have often praised the cable channel and its website for positive coverage, especially when it disputes the election results and encourages conspiracy theories about voter fraud.

What if Newsmax decided to branch out into sports coverage? Saturday Night Live imagined that premise for a sketch titled “Sportsmax,” in which a spinoff network took the approach of insisting Trump won the 2020 election and applied it to the 2020 New York Jets, currently 0-12 in the 2020 NFL season.

“A lot of mainstream sports networks like ESPN are saying that the Jets have not won a single game this year, that they’re 0-12,” explained Sportsmax anchor Robert King (Alex Moffat).

Analyst Drew Matarazo (Beck Bennett) then insisted that the Jets have actually won 11 games. As an example to support his theory, he cited the Oct. 25 game versus the Bills, in which the Jets had a 3-0 first-quarter lead.

“But then something suspicious happened, right?” said Matarazo. “The Bills start getting all these points, outta God knows where.”

Check out the sketch:

Also joining the fun were “Jetsperts” DeLuca (host Timothée Chalamet) and Delvechio (Pete Davidson), who disputed the Jets’ 20-3 loss to the Dolphins on Nov. 29. Could the NFL’s scoring of that game be trusted? What if 500 Jets fans signed sworn affidavits saying they saw their team win that matchup? How could eight million hard-working Jets fans be wrong?

(Was Davidson channeling a bit too much of Bill Swerski’s Super Fans – Da Bears! – by chowing down some fries while he was talking? You make the call. At one point, Davidson looked as if he might choke, like Chris Farley’s Todd O’Connor almost did on a full porkchop back in the 1990s!)

This was an amusing spoof on Newsmax’s willingness to indulge “alternative facts” and conspiracy theories, resulting in growing popularity with the outgoing president, his supporters, and former associates. (Former press secretary Sean Spicer has a show on Newsmax TV.)

So many blistering hot sports takes could come from this approach. Maybe we should look for it to be daytime programming on a sports network someday.

(I know SNL is based in New York, thus the Jets were featured in the sketch. But as a Detroit sports fan, I’d love to see more favorable coverage of that scene if this “Sportsmax” thing ever catches on. What are the chances that the Lions, Tigers, Pistons, and Red Wings are all bad at the same time? Michigan and Michigan State football too! Isn’t that suspicious… ?)