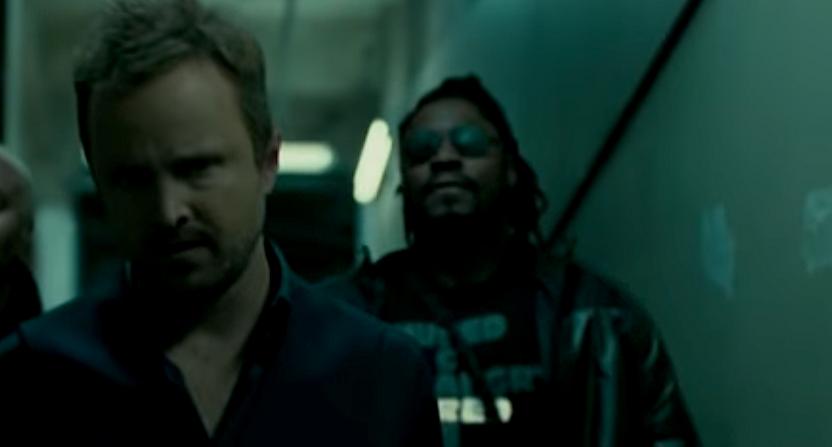 You probably had to be paying close attention or be enough of a Marshawn Lynch fan to notice whenever he pops up on screen, but the NFL running back made an appearance in the Season 3 trailer for HBO’s Westworld.

The preview for the sci-fi series debuted online Thursday and Lynch can be seen at the 0:52 mark of the clip, behind Aaron Paul (Breaking Bad) and beside Lena Waithe (Master of None) as the trio walk down a corridor.

What part Lynch plays in the series and how many episodes he could be in isn’t known, but an HBO spokesperson told ESPN’s Paul Gutierrez that Lynch will have a “fun and pretty substantial role.” Of course, that could mean anything. Perhaps Lynch has a memorable scene with Paul, something notable enough to stoke some discussion after the episode airs.

Check out the full trailer for Westworld, Season 3:

Lynch wearing a shirt that says “BORED,” “AMUSED,” ANGRY,” “SAD,” and “EXCITED on the front seems appropriately on-brand for him, doesn’t it? But is he on the good guys’ side or one of the bad guys? Does he have any lines or will he be there to mostly look imposing and fearsome? Is this guy taking care of his chicken and his mental?

Perhaps most importantly, will Lynch and his character help us figure out just what the hell is going on in this series? (How many of you reading this stuck with Westworld‘s difficult, incoherent Season 2?)

Another question about Lynch’s role is whether or not he plays a human character. Westworld takes place in a future when androids (called “hosts”) have been created to populate an elaborate series of theme parks. But some hosts begin to develop intelligence and personalities of their own, rebel against their human creators and seek to experience the world outside the theme parks. Season 3 follows one of those hosts, Dolores (Evan Rachel Wood), as she enters that “real world.”

Lynch hasn’t committed to playing another NFL season, saying “We’ll see what happens” when asked about a return following the Seahawks’ playoff loss to the Green Bay Packers. The running back appeared to be retired after playing only six games for the Oakland Raiders in 2018. But he rejoined the Seahawks (for whom he played six seasons from 2000 to 2005) at the end of last season, playing in one regular season and two playoff games. In those three games, he compiled 67 rushing yards and four touchdowns on 30 carries.

The role in Westworld isn’t Lynch’s first as an actor. Previously, he appeared as himself in two episodes of The League and one episode of Brooklyn Nine-Nine.