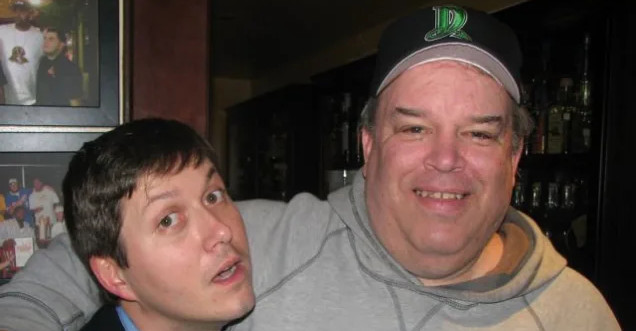 For those who have been reading sports blogs for a long time, Rick Chandler is a familiar name. When Deadspin launched in 2005, Chandler was one of the site’s two writers, alongside Will Leitch (seen at left above with Chandler). And many of his posts were critical to the site’s voice, covering everything from the first “You’re with me, leather” post to funny stories on port-a-potty jumping, Rick Reilly, a former high school coach who tried to burn down a school and more; he also played a big role in encouraging the community that sprung up around Deadspin, from handing out commenting invites to frequently linking other blogs.

After work at Deadspin, Chandler went on to write for NBC and SportsGrid, and he made an impact at both places. (And before Deadspin, he was Tom Brady’s youth basketball coach.) There’s some sad health news on him now, though; Chandler suffered a stroke on July 3, suffered another stroke August 2, and has been moved to palliative care. Here’s what Chandler’s sister Kathleen wrote about him Friday on a CaringBridge site dedicated to him:

On July 3, your friend and my brother, Rick Chandler, suffered a debilitating stroke, severely limiting his movements.

Today we learned he suffered a secondary stroke, which is common under these medical circumstances. This second stroke, coupled with a variety of related medical complications, has left Rick in a non-responsive state. We have been advised that any chance of improvement is minimal and Rick would remain in a vegetative state for the rest of his life.

For this reason, the family has made the very painful and difficult – yet humanitarian – decision to let Rick pass.

Leitch (who also worked with Chandler at a variety of places before Deadspin, including IronMinds and The Black Table) recently wrote a touching tribute to Chandler in his newsletter, which Deadspin reprinted Monday. The piece is worth reading in its entirety, but here’s a highlight about what Chandler meant to Deadspin:

The site ended up taking off, as you might have heard, but Rick remained steady, writing his 5-6 posts a day and staying out of the way for me to do everything else. He was nonetheless responsible for many of the site’s biggest hits. It was him, not me, who had the first “You’re With Me, Leather” post. (We had no idea that was going to explode like that.) His Barbaro posts were always sharper and goofier than mine. And he always made sure the site remained, at its core, silly. I was so ambitious, and so overwhelmed by how big the site got so fast, that I would have been willing to do just about anything to make sure the site succeeded had I not been kept in check in part by Rick. Rick always reminded me why we were there in the first place. He always reminded me none of this was supposed to be taken all that seriously. This place never would have survived without him.

For what it’s worth: I never actually saw Rick during any of this time. I’d wake up in the morning, his posts would already be in the CMS, I’d schedule them for sometime later in the day, and then I’d write like an idiot until 5 p.m., when I’d email him whatever stories I never got around to writing about. We were on entirely different schedules, and we rarely even talked. We didn’t need to: We were both on the same page. During all of Deadspin’s run together, I only physically saw him once. It was during the God Save the Fan book tour, when we did a stop in San Francisco. Rick was a figure of mystery to most of Deadspin’s readers, and when we all went out to a bar after the reading, everyone was desperate to meet him. My sister lived out there at the time, and she was instantly drawn to him. She told me that night he might be the sweetest man she’d ever met.

The sports internet today is almost unrecognizable compared to what it was in 2005, but many of the early figures were crucial to how online sports conversation has evolved since then. And Chandler definitely falls into that category; his posts were vital to giving Deadspin an identity not just as a funny site, but as a site that had a heart. Leitch summed that up well in a 2009 Deadspin post on Chandler when Chandler left that site:

I’d worked with Rick at Ironminds, my old site from way back in the day, back before even The Black Table, and I’d always looked up to him. He was naturally funny in a way I wasn’t: He was funny without having to sweat at it. He also came at the world in a way I appreciated, and in a way I thought the site would need: He liked to poke fun at humans, but he didn’t like to mock them. Rick was incapable of being mean; he was always too busy giggling. I wanted that for the site – because I knew, no matter how nice we were, people were going to accuse us of being cruel Internet scum, so I wanted someone who was the literal opposite – but mostly I just wanted to be a part of something Rick was doing. Rick makes me laugh very, very hard. Those are nice people to have around.

That’s absolutely true, and it illustrates a lot of what Chandler brought to every place he wrote. He was tremendous at finding the weird stories, the funny angles, and the ways to make his audience laugh at the absurdity of each situation. And he’ll be missed throughout the sportswriting community and beyond. Our thoughts go out to Chandler’s family and friends during this difficult time.

Chandler was also providing care to his mother, who is dealing with health issues of her own. His friends have created a GoFundMe to help with her rides and care, which has raised over $2,000 of its $3,000 goal so far.