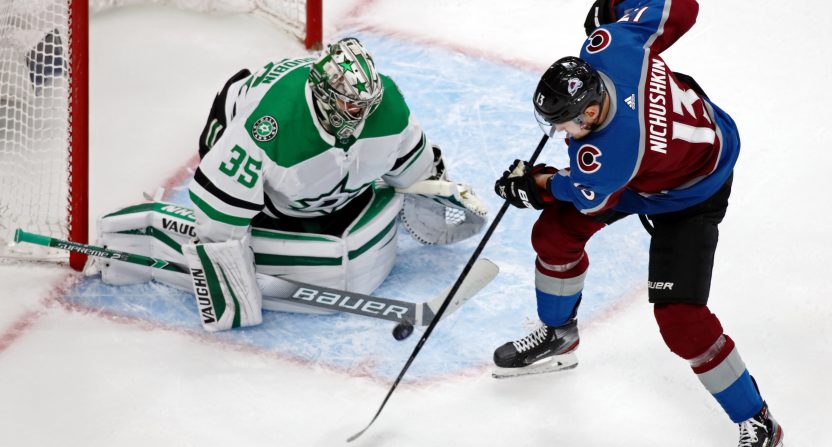 Why have all those extra channels if you’re not going to use them? That’s apparently the philosophy at NBCUniversal.

The Colorado Avalanche and Dallas Stars will play Game 7 of their Western Conference Semi-Final series on Friday. But in a scheduling curiosity, the game will be played at 4 p.m. ET. That’s 2 p.m. MT for fans in Colorado, and 3 p.m. CT in Dallas!

Why’s that? As Colorado Hockey Now’s Adrian Dater explains, another Game 7 between the Vegas Golden Knights and Vancouver Canucks, was already set for 9 p.m. ET at the same arena, Rogers Place in Edmonton. Why on the same day? The NHL wants to keep the schedule moving and get to the Conference Finals and Stanley Cup Final.

So the arena crew will need 90 minutes to properly resurface the ice between games, but a time cushion is also necessary for possible overtime in that first game.

However, this isn’t the only puzzling development for Avs and Stars fans who want to watch that Game 7. The broadcast won’t be on NBC Sports Network, as could be expected. Instead, the game will be televised on USA Network.

Not exactly the home for the Stanley Cup Playoffs. But it’s under the NBCUniversal umbrella, so the broadcast is being shuffled over there.

By the way, why exactly isn’t the telecast on NBC Sports Network? Isn’t that what they do, broadcast the Stanley Cup Playoffs. Awful Announcing’s Ken Fang provides an explanation:

If you're wondering why it's not on NBCSN, the network has a prior commitment for the Kentucky Oaks which is contracted through the Kentucky Derby.

As you might guess, putting the game on USA Network led to some confusion, frustration, and amusement among hockey fans. Avs and Stars supporters might have to take the day off work to watch this one.

Stars/Avs Game 7 is 3pm on USA Network. That’s the channel Silk Stalkings came on before you stayed up for Late Night Cinemax. What the hell.

The Avs will play a Game 7 at 2 p.m. Friday on USA Network. Hmm. So, a terrific hockey team blessed with the best player on ice is scheduled for a weekday afternoon tilt on a channel that airs WWE. Thanks, NHL. Thanks for promoting the greatest sport on Earth so well. #GoAvsGo

Hey, the game could be on CNBC or MSNBC, right? Or even… Bravo or Syfy. At least it’s not only being streamed on Peacock. (Although that could be useful for fans at work.)

So this afternoon I have to find USA Network on my TV to watch Game 7 of the Avalanche and Stars. I did not know USA Network still existed. Last time I watched it I was a kid watching Cartoon Express!#BringBackUSACartoonExpress pic.twitter.com/FyB6rvGulT

By the way, both Game 7s — regardless of cable channel — will be called by the same broadcast team of Kenny Albert and Pierre McGuire. Those guys surely appreciate the break between the two games.

?BROADCASTING HISTORY?@KennyAlbert and Pierre McGuire will call TWO Game 7s on the SAME DAY on Friday from Edmonton.

Plenty of hockey fans will surely lament NBC’s treatment of the NHL and Stanley Cup Playoffs. But the COVID-19 shutdown of sports and the rescheduling it necessitated has wreaked havoc with TV broadcast schedules, causing a lot of different events to be held at similar times.

As we’ve kept hearing during the past 6 months, we’re living in unprecedented times. Friday’s Stanley Cup Playoffs matinee is but the latest example. Hopefully, fans will be able to enjoy some early hockey on a holiday weekend. (And if you’re in the East, working in an office, you might be about done with the workday anyway and on the way home…)