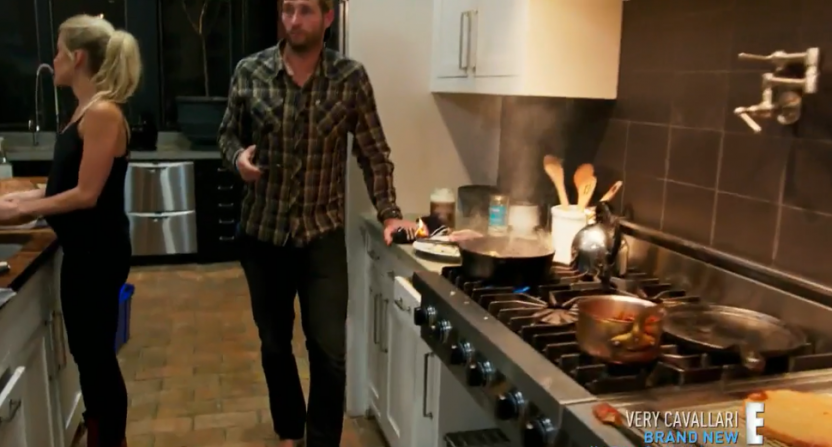 The Recap
Freshly back from their company team building retreat in Florida, the Uncommon James crew is but one week away from the store opening. Sure, they haven’t updated the shipping prices on the website, but hey, at least the angel mural is finished. Taylor’s pregnancy is mostly out in the open, and, for what feels like the seventh consecutive episode, Kristin is wearing the sparkly jacket with no shirt underneath for the majority of her show interviews. Either she only owns one blazer, or these interviews were all filmed in one day. Wait, is reality TV not real?

The Canadian, whose given Christian name is Matt, is in town visiting Kelly for, what she keeps referring to as their first date. I guess their first, first date during Episode 4 was just, what? A practice run? Regardless, they spend their second first date having dinner at Casa de Cavallari-Cutler. Kristin seems inordinately concerned that Jay is going to be rude to Canadian Matt, and proceeds to nag him about the importance of being kind to someone visiting your home. Jay responds by trying to commit arson:

The double date was pretty lame, mostly because Kristin is acting like Kelly’s overprotective father, giving Canadian Matt the “What are your intentions with my daughter?” speech. It was awkward and weird, and completely unnecessary. Then, with almost no basis for coming to this conclusion, Kristin decides that Kelly must not like The Canadian after all. Kristin is as transparent as the shirt under her sparkly jacket. Clearly, she doesn’t like him. Kelly liked him enough to spend the night at his AirBNB.

While perusing guitars in a local music shop, John breaks the news to Shannon that he won a song contest, which comes with a $5000 prize, a publishing deal, and mentorship from someone I’ve never heard of. Being the money maestro that he is, he debates blowing the whole wad on a new guitar, instead of something more practical, like buying a car or moving out of his parent’s basement. But nah, John is content using Shannon as his own personal Uber, which is honestly her bad.

We’re down to five days before the Uncommon James launch party and Kristin is off to New York for the first leg of her book tour for True Roots. Girlfriend is BUSY. She appears on Good Morning America and a host of other shows, and it took me watching this episode three times to realize the woman with the blue hair was Jenny McCarthy. How nice to have two anti-vaxxers on the same screen. Later in the episode, Kristin learns that True Roots is ranked #3 on the New York Times Bestseller List. ::cries writer tears::

Jay and the kids bake her a cake to celebrate, and again, where is the reality show of Jay taking care of these rugrats?

John performs his award-winning song at Tin Pan South, which is apparently some kind of songwriters’ festival which is attended by top producers and industry professionals. It sounds like every other country song in existence, but good for him. After the performance, Mike (Taylor’s boyfriend/baby daddy) steals his thunder by announcing that he plans to propose to Taylor in a couple of days. With no ring, no time, and no clue as to how he’ll do it, he’s thoroughly prepared for this monumental event. Luckily Shannon is there to steer him in the right direction, so what was originally a simple proposal has now turned into a huge event with flowers and “feminine touches” and, I’m not kidding, a $25,000 ring. Reality TV celebs, they’re just like us.

Speaking of wedded bliss, Brittainy’s mom is getting married and comes to town to try on dresses with her daughter. Despite not being engaged and currently in a massive fight with her boyfriend Jon Stone, Brittainy tries on a gorgeous gown. She looks positively stunning and I’m again mad that she’s dating that lout in the first place. Mom shares with Brittainy that she doesn’t think Jon is right for her. Yeah, no shit.

As we inch closer to the store opening, Kristin and the crew host a training for the young women who will work on the sales floor at Uncommon James. While Kristin alleges that some did a good job, the ones they showed on camera were absolutely painful. One poor gal couldn’t even remember the basic details of bone inlay salad tongs. GEEZ.

We rounded out the episode by witnessing another Brittainy and Jon fight. They can’t agree on anything, whether it’s the importance of marriage or what food to feed their puppy. Jon is a terrible communicator and this relationship is going downhill fast. Hopefully Brittainy will get the puppy when these two finally split up.

Stock Up: Shannon
I’ve come to appreciate how fiercely loyal Shannon is. I mean, she managed to get Mike to buy Taylor a $25,000 ring and she’s committed to pulling off the perfect engagement.

Stock Down: Jon Stone
If Brittainy doesn’t break up with this monster next week, I’m out.