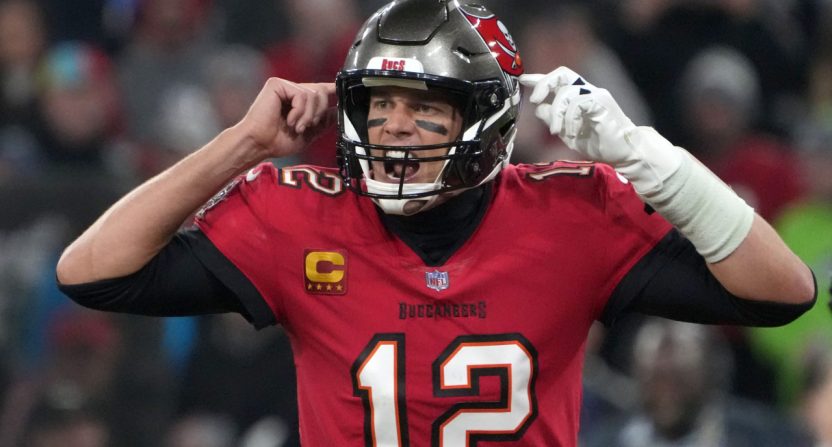 To the extent any large contract can stun people these days, Tom Brady’s future deal with Fox Sports certainly raised some eyebrows. The man widely considered the greatest quarterback in the history of the NFL inked a 10-year deal for a reported $375 million to join the Fox NFL broadcast team. He will presumably jump right into the booth, do PR work for Fox Sports and serve as an overall product ambassador across the board.

None of this will begin until Brady hangs up his cleats for good, although it is possible he joins a Fox broadcast team during the playoffs as soon as this season if the Bucs get eliminated before the Super Bowl. Until then, Brady remains very much active and occasionally very effective as the Bucs quarterback. Monday’s dramatic win over the Saints was one of the best comebacks Brady has engineered in even his storied career. The Bucs erased a 16-3 deficit in the last 3:00, marking an NFL record 44th time Brady has led a team back to victory while trailing in the fourth quarter.

Brady Still Has Something Left In The Tank

The win almost assures that the 6-6 Bucs will take the title in the incredibly weak NFC South. Football Outsiders gives Tampa Bay an 87% chance to win the division, and the betting markets over at BetMGM mirror that. If you do not have an account yet, you can redeem the bonus code at BetMGM Sportsbook and get a welcome offer.

The Panthers trail by two games, but still play the Bucs and would win a tiebreaker. That tiny bit of uncertainty is just about all that is left.

The weak division has let the Bucs slide by in an otherwise mediocre season. The roster looks old and slow. Brady deserves all the credit in the world for being a periodically very effective quarterback at age 45. But his level of play has taken a definite hit this year. Brady ranks 14th in the league in Adjusted Net Yards per Pass Attempt (ANY/A) at 6.25, just behind Trevor Lawrence and just ahead of Jacoby Brissett. Brady ranked fifth in that stat last year at 7.41, and 8th in 2020 at 7.53. ESPN’s Total QBR metric is even more unkind, placing Brady 20th in the NFL at 52.2, just a shade above league average. He ranked second in 2021 at 73.1 and ninth in 2020 at 66.

Could The Bucs Win The NFC?

Monday’s comeback and the fact that the Bucs are a virtually lock to get in the playoffs and host at least one game begs the question whether it makes some sense to buy low here. Perhaps Brady and the Bucs can put it all together in January and make a run. Here are the BetMGM odds to win the NFC title.

Football Outsiders gives the Bucs just a 4.2% shot, which simply reflects the quality of play by the team thus far and not that they have a HOF QB. As a side note, their success is thanks more to their defense as the Bucs rank eighth in the league in Defensive DVOA vs 16th in Defensive DVOA.

No prediction model will price in some future mythic “Brady Magic” that will show up in the playoffs. The betting markets do price in the bump however as they imply the Bucs have about a 12.5% chance to win the NFC.

There is a similar story on the Super Bowl betting markets at BetMGM.

The algos do not buy the Bucs here either. The odds imply the Bucs have a 5.8% chance of hoisting the Lombardi Trophy, but Football Outsiders gives them only a 1.5% shot. FiveThirtyEight is slightly more bullish at 2%. One bit of recent history leans to the Bucs though as both the Rams and Bengals made it to the last Super Bowl from the fourth seed. That is almost certainly the spot the Bucs will start as Football Outsiders places their chances of a fourth seed at 78%. All in all, anyone looking to buy “low” on the Bucs is just throwing a dart with very poor chances of success.

Brady is still listed on the MVP odds board, but his chances are extremely remote. Brady finished second last year with 10 votes out of 40. He is listed at +15000 this go around. Even if the Bucs run the table, Brady will not approach Patrick Mahomes, Jalen Hurts, Joe Burrow and Josh Allen at the top of the pack.

But hey, there is always 2023! Brady may not necessarily leave the field just yet. His contract with the Bucs runs out and the team itself appears on the downswing. Brady can suit up anywhere he wants in 2023 if he chooses to put off his Fox Sports payday for another year. His level of play has diminished from his own standards but even at that he is clearly at least a mid level NFL QB with the ability to pick it up in spots. Plus he rarely misses time for health reasons, pretty incredible for a player in his mid 40’s.

The 49ers, his boyhood team, look like the obvious potential landing spot. They have a team built to win right now and a potential gaping hole at QB with Jimmy Garoppolo a free agent himself and Trey Lance unable to stay on the field so far. Even if Lance comes back at perfect health next year, will the Niners want to risk a Super Bowl level roster on his unknown development path? Keep an eye out on Niners 2024 Super Bowl futures when BetMGM lists them in February.