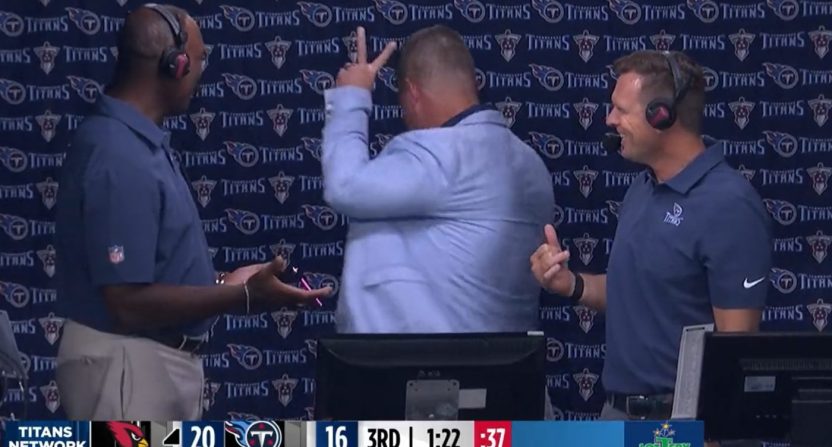 Titans general manager Jon Robinson abruptly ended his in-game interview during a preseason game Saturday night. His exit came after the team failed to put points on the board during his broadcast booth appearance.

Robinson was very gracious with his time when he joined broadcasters Dan Hellie and Charles Davis in the booth during the Tennessee Titans‘ final preseason game against the Arizona Cardinals Saturday. The Titans’ general manager stayed for 33 minutes before he appeared to surprise the announcers by dropping the mic, throwing up a peace sign and saying, “I’m gone.”

GM with the mic drop on Charles Davis and @DanHellie ?

Robinson joined the Titans preseason broadcast for the start of the second half as Tennessee was leading 13-10. But after watching the Cardinals score 10 unanswered points, Robinson had seen enough.

“All right, we haven’t scored a point since I came in here,” Robinson said as the Cardinals pushed a field goal through the uprights. “I am gone, guys.”

And with that, the Titans’ general manager ripped off his headset, put his back to the camera, flashed two fingers to signal “peace” and abruptly left the booth. Maybe Robinson was joking, but the lack of a handshake, ‘thanks,’ or a smile was convincing enough that it caused Davis to take responsibility for the GM’s departure.

“I think I just messed our time with the GM,” Davis said with a smile. “He’s like ‘Your questions, we haven’t scored a point.’ I don’t know that I’ve ever had a headset drop by a GM. A party’s not a party until Charles Davis shuts it down…did you see the look he gave me on the way out the door?”

Robinson didn’t seem upset with Davis or Hellie, and I can’t imagine he was that angry about Tennessee’s scoring drought in the second half of their final preseason game. But a 33-minute visit to the broadcast booth is a long time, and with the announcers showing no inclination to let him go, perhaps the Titans’ GM realized he needed to get creative if he wanted to get out of there.