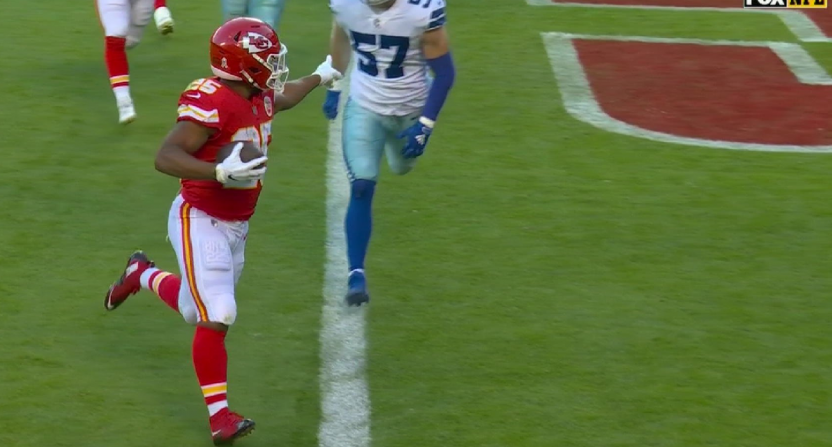 A few weeks ago, a crucial taunting penalty against the Chicago Bears on Monday Night Football brought a whole new level of scrutiny upon the NFL’s point of emphasis.

You might think the wave of news cycle dominating backlash that call created among fans and media would have led the NFL to dial back that emphasis. It didn’t seem that way when the league’s official officiating account released a video defending Tony Corrente’s call, but hey, they have to cover their ass there, that doesn’t mean they wouldn’t back off, right? (Anakin/Padme meme voice: right?)

Let’s jump ahead to today’s Chiefs-Cowboys contest, the late Fox national window contest. In another huge game, officials threw another taunting flag, this time on Chiefs running back Clyde Edwards-Helaire. Edwards-Helaire was on his way into the end zone after receiving an option pitch when he committed this heinous infraction:

Did you miss it? Let’s zoom in on the act that was absolutely worth a personal foul:

How does flagging that benefit anyone? First of all, mid-play taunting is actually awesome. If the NFL is going to start penalizing players for looking cool while making opponents look bad, they’re going to have to crack down on a LOT of the fun stuff (like, you know, every cool play.)

That a point of a finger is somehow more readily called and the same penalty outcome as an illegal hit on a defenseless player is one of the truly ridiculous aspects of professional football, which is a sport chock full of ridiculous aspects. Also this penalty was called as a dead ball penalty, presumably because the officials here realized how much shit they would take if they took a touchdown off the board. It did force Kansas City to try a very long extra point, which Harrison Butker converted.

The only, only justification for the league focusing on “taunting” is if they felt things had been getting out of hand, and giving officials directive to try and snuff things out would lead to a sort of conflict de-escalation earlier in games. Let’s check in on how that worked today:

This is the natural evolution for players here, by the way. There’s no way in hell a point of emphasis is going to magically wipe out the league’s imaginary scourge of taunting. Enforcing it has varied wildly; Aaron Rodgers screaming at opposing fans after a score? Totally fine. Marsh and Edwards-Helaire doing the bare minimum towards opponents? Auto-penalty. This isn’t to say Rodgers should have been penalized, either, of course. Nor should the coordinated team scoring celebrations. These things are awesome. But asking players to be able to flip that particular switch is never going to work.

In fact, there’s a strong case to be made that rather than decrease taunting, it’s possible it leads to players just deciding that if they’re going to get a flag for every little possible thing, they might as well just go all out and pantomime firing guns across the field. I’d argue that should also be okay; this is supposed to be entertainment. Plus there’s the gambling aspect; this might not have taken a touchdown off the board, but had Butker missed that PAT and the Chiefs had failed to cover (they eventually won 19-9), it would have been an impossibly bad beat. That doesn’t usually matter, but with the NFL in bed with sportsbooks, the degrees of separation between the league and  “bettors with a legitimate complaint about how the NFL maintains legitimate competition” have been greatly reduced.

The NFL making things that don’t get anyone hurt a point of emphasis to penalize while also profiting off of players injuring each other and themselves weekly on perfectly legal plays remains one of the dumber dichotomies. The league has essentially put themselves in this corner, and it’s making things worse for very little (if any) gain.