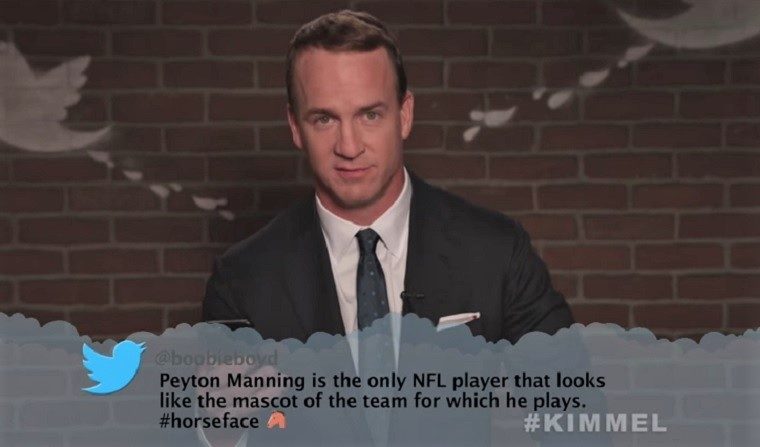 Just in time for the Super Bowl, Jimmy Kimmel Live! presented its latest edition of Mean Tweets featuring several current and former NFL stars. Fitting for a lead-up to The Big Game, this installment of Mean Tweets may have been one of the best yet. The reactions from the NFL players reading them is certainly worth a watch.

Which player is a p***y, according to the keyboard warriors of Twitter? Who read their Mean Tweets most enthusiastically? Which tweets were more lame than mean? How badly was the English language butchered in those 140 characters? (Doesn’t look like Kimmel’s crew picked any 280-character tweets. Succinct and pithy works best.)

This will only take two-and-a-half minutes of your time. Check it out:

Most of the time, it’s the reactions to the tweets that are better than the tweets themselves, right? Most everyone seemed to take their insults in good fun. Well, maybe except Oakland Raiders receiver Amari Cooper. He did not seem to care for that “Amari Pooper” rip. Or maybe he just didn’t think it was a funny joke.

But Rashad Jennings tried to be understanding. Emmanuel Sanders tried to educate. (As we know, that’s a valiant but futile gesture.) Travis Kelce may have had the most fun. Ryan Tannehill brought some elegance to the proceedings with his tuxedo. And it could have been so much worse — and probably is, if you cared to do some digging — for Jason Pierre-Paul. Holding his smartphone with his mangled hand added some emphasis to the tweet. (Does he normally hold his phone with that hand now? Or did producers ask him to do so, in order to show that right hand on screen?)

Credit should go to @isotopewildcat for a rather clever tweet about Danny Amendola. “Amendola with his mustache looks like a young Burt Reynolds with the height of Sally Fields” had some thought put into it. Points taken off for “Fields,” rather than “Field,” however. Yes, we’re maintaining some standards. Otherwise, what’s the point?

Well-done, NFL stars. Hopefully, you take the time to read some Nice Tweets as well. If any were actually written. It’s so much easier to find the negative on Twitter.