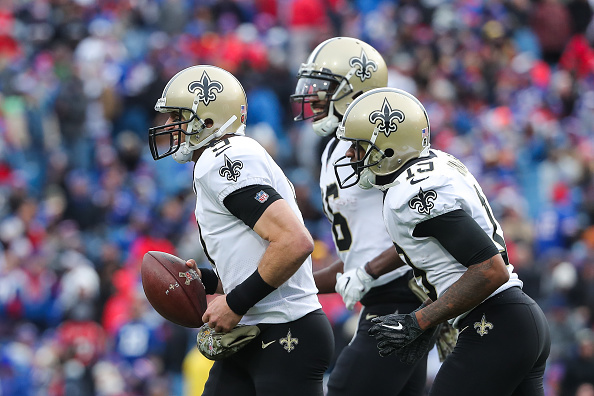 With only seven full weeks left in the 2017 NFL season, the push for the playoffs is really beginning to heat up.

A number of games on the Week 11 schedule will have major postseason implications, including the Tennessee Titans taking on the Pittsburgh Steelers on Thursday night, Case Keenum’s Minnesota Vikings and Jared Goff’s Los Angeles Rams facing off at U.S. Bank Stadium, the Philadelphia Eagles battling the Dallas Cowboys on Sunday night, and the Atlanta Falcons matching up with the Seattle Seahawks on Monday Night Football.

For everything else on the upcoming schedule, including broadcast maps and the game’s announcers, we’ve got this trusty guide here to help sort that all out.

Titans notes – After last week’s win over the Cincinnati Bengals, Tennessee has now won four games in a row. It is the first time that the Titans have compiled at least four victories in a row in a single-season since 2009.

Steelers notes – Like Tennessee, Pittsburgh is also unbeaten in their last four games. Their last loss came in Week 5 when they hosted a team from the AFC South (Jacksonville Jaguars), just like they will be doing on Thursday night.

Lions notes – In 2011, Matthew Stafford became just the third quarterback in Detroit’s entire history to throw for 20 or more touchdowns in a single season. With three more on Sunday, he will accomplish feat for the seventh time in his career.

Bears notes – Last week against the Green Bay Packers, Chicago rookie quarterback Mitchell Trubisky finished with a single-game career-high of 297 passing yards. His final total was the second-most in Bears history to be thrown by a rookie signal caller in one game, behind only Cade McNown’s 301 yards in 1999.

Jaguars notes – Rookie wide receiver Dede Westrbrook is expected to make his regular season debut for Jacksonville on Sunday after missing the first 11 weeks with an injury to his core muscle. The team says it will likely limit his reps against Cleveland, but his presence could still be a boost for a Jaguars team that will be without fellow receiver Allen Hurns on Sunday.

Browns notes – On the other side of the field, Cleveland receiver Corey Coleman is expected to return to the field for his team as well. The second-year Browns pass catcher has not played since he broke his hand in Week 5.

Ravens notes – Three times in the franchise’s history, Baltimore has traveled to play in Green Bay and all three times they came up on the losing side of the scoreboard. Along with the Packers, the Ravens have never won a regular season game on the road when facing the Chicago Bears, Buffalo Bills, Indianapolis Colts, Minnesota Vikings, New England Patriots, or Philadelphia Eagles.

Packers notes – Already without rookie Aaron Jones for at least three weeks with a knee injury, Green Bay’s offensive backfield could also be without Ty Montgomery due to injured ribs. If Montgomery cannot suit up, the Packers’ only running back options will be rookies Jamaal Williams and Devante Mays.

Cardinals notes – Blaine Gabbert is expected to be Arizona’s starting quarterback this week after Drew Stanton suffered a sprained knee in their Week 10 loss to the Seattle Seahawks. For Gabbert, it will be the third NFL team that he has started a game for since entering the league back in 2011.

Texans notes – From Week 3 to Week 8 with rookie Deshaun Watson as their starting quarterback, Houston averaged 39 points and 420.6 total yards per game. In the two games since Watson suffered a season-ending knee injury, the Texans have seen those averages dip to just 10.5 points and 285.5 total yards per matchup.

Bucs notes – During Tampa Bay’s win over the New York Jets last week, Bucs quarterback Ryan Fitzpatrick just could not help himself and unsurprisingly threw an interception. Fitzpatrick has now thrown a total of 136 interceptions in his career and he has actually tossed a pick in 62 percent of the games he has ever started in the NFL.

Dolphins notes – Having already hauled in 61 passes so far this season, Miami receiver Jarvis Landry is on pace to finish with at least 90 catches for the third time in his four-year career. However, his hope for three straight seasons with at least 1,000 receiving yards will likely come to an end unless he drastically improves upon his current 52.4 yards per game average.

Vikings notes – Case Keenum will be Minnesota’s starting quarterback for the fifth straight game this Sunday. Just 10 weeks into the year and Keenum has already set single-season career-highs for wins (five) and touchdowns (11).

Chiefs notes – Perhaps the grind of the NFL is getting to him, but Kansas City rookie running back Kareem Hunt has seemed to cool down a bit since he made an exploding debut in the season’s first four games. After amassing 659 total yards and six touchdowns in the first four weeks of the year, Hunt has yet to find the end zone again and has only gained 472 total yards in his last five games.

Giants notes – Despite being a head coach with an offensive background, Ben McAdoo has New York’s offense performing at a record-low pace in 2017. Having only scored a total of 150 points so far this season, the Giants’ offense is on pace to finish the year scoring just 267 points. That amount would be tied for the sixth-lowest in a single-season by a New York team since 1978.

Redskins notes – Through the first three games of the year in which they allowed just 62.3 rushing yards per matchup, it looked like Washington was going to have a pretty impressive run defense in 2017. However, the Redskins’ defense has been obliterated on the ground since, allowing an average of 133.2 rushing yards per game in their last six contests.

Saints notes – For the sixth time in the team’s history, New Orleans has won at least seven games in a row during a season. The last two times this occurred (2011 and 2009), the Saints ended up finishing the year with a 13-3 record.

Bills notes – Buffalo has opted to bench quarterback Tyrod Taylor this week and will instead be going with rookie Nathan Peterman under center on Sunday. Peterman will be the 17th quarterback to start a game for the Bills since Jim Kelly retired after the 1996 season.

Chargers notes – In 2017, Los Angeles seems to do everything it needs to win right up until the end of the game. Of the Chargers’ six losses this year, four of them have been decided by three points or less.

Bengals notes – Compared to how the franchise was during the decade before he got there, Cincinnati has been a very good team since Marvin Lewis became their head coach in 2003. However, this year could be his last with the team as the Bengals have lost at least six of their first nine games in a season for the first time since 2010.

Broncos notes – Second-year quarterback Paxton Lynch could see some on-field action this Sunday against Cincinnati. Lynch is expected to be active for the first time all season this week and will be Denver’s backup signal caller behind the amazing, GIF-creating Brock Osweiler.

Patriots notes – After a rough start, New England has seen some good improvement in their pass defense recently. The Patriots’ defense has only given up an average of 212 yards to their opponents through the air in their last three games. Way better when compared to the 324.8 passing yards they were allowing during the first six weeks of the season.

Raiders notes – If Oakland is going to have a serious chance at getting back to the playoffs this season they need to do well over the next five weeks. Four out of their five upcoming games will be played at home before they head back out on the road for their final two matchups of the year with the Philadelphia Eagles and Los Angeles Chargers.

Eagles notes –  At their current rate, Philadelphia is on the right path to capture the top seed in the NFC playoffs, something they have not done since 2004. That season also happened to be the last time the Eagles made it all the way to the Super Bowl.

Cowboys notes – Week two with no Ezekiel Elliott in their offensive backfield has Dallas taking on the best run defense in the NFL right now. The Cowboys will need a big game out of quarterback Dak Prescott and his 21 total touchdowns to have a legitimate chance at getting a win on Sunday night.

Falcons notes – When Atlanta steps onto the field on Monday night, it will likely be without the team’s leading rusher. Falcons running back Devonta Freeman suffered a concussion against the Cowboys last week and is not expected to suit up for their game on Monday.

Seahawks notes – Seattle may have lost cornerback Richard Sherman for the season after he suffered an Achilles injury last week, but the Seahawks’ defense will likely be welcoming one of their other top defensive backs in safety Earl Thomas back to the field on Monday. Thomas is expected to return to the team’s lineup after missing the last two games with an injured hamstring.