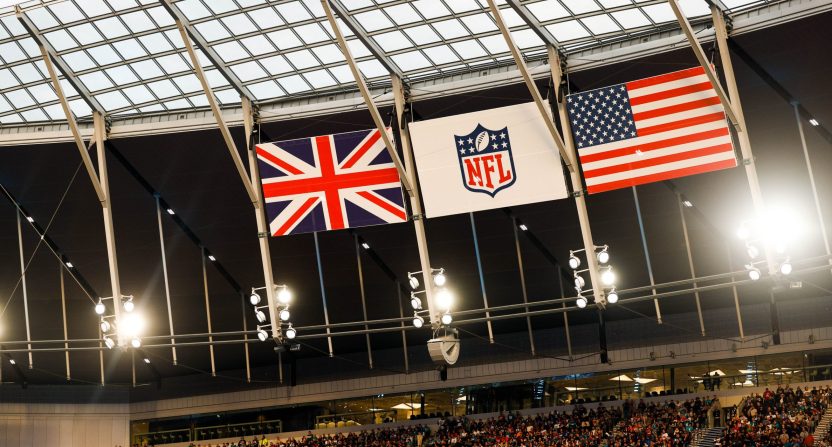 The NFL has greatly increased their international efforts in recent years, with games in London being a constant every season.

That’s thanks in part to a deal with London EPL club Tottenham Hotspur which sees two games played at Tottenham Hotspur Stadium every year. Now, according to the Daily Mail, the club wants to bid on an even bigger prize: hosting the 2026 Super Bowl.

Tottenham are lining up a historic bid to stage the Super Bowl.

The club want to become the event’s first overseas hosts and are exploring a bid to bring American football’s showpiece to London in 2026.

Tottenham have close links with the NFL, having agreed a 10-year staging contract worth £40million to host two regular-season matches at their stadium each year.

As to the why, from Tottenham’s end the benefits are more apparent:

Putting on the Super Bowl would be a huge boost for Tottenham’s global standing however, while even an unsuccessful bid could raise their profile in America and help the club’s attempt to find a naming-rights partner.

Tottenham have been unable to agree a naming-rights deal since their £1bn stadium opened three years ago despite considerable interest, with chairman Daniel Levy holding out for an offer worth about £400m over 20 years.

As for why this would interest the NFL, it’s a bit more complicated. Yes, obviously the league has a desire to expand globally. International revenue streams aside, being able to do something the league has never done before would have an appeal to plenty of executives. The downsides, though, are much more obvious.

London’s time zone would mean starting the game either very late locally or very early in the United States. Considering the television revenue involved with the game, there’s almost no chance the timeslot would be moved up to accommodate an international contest, which would mean starting the game impossibly late in London. That’s just another wrinkle in the many that would come from moving the Super Bowl overseas, and it’s another one that might rub teams the wrong way from a competitive aspect.

That kind of travel and the accompanying logistical issues might have a real effect on on-field play, which is the last thing that should be a concern. And then there’s the fans, too; yes, some will travel, and yes there are NFL fans of every team living in the UK and Europe. But imagine a scenario where, say, the Lions make their first ever Super Bowl (stop laughing), and rather than deciding if it’s viable to travel to somewhere like Indianapolis or Phoenix fans are completely priced out from attending.

There’s just a lot to consider, and unless the NFL is willing to risk jeopardizing one of the most valuable properties in sports, it’s hard to see a London Super Bowl as a truly viable option.