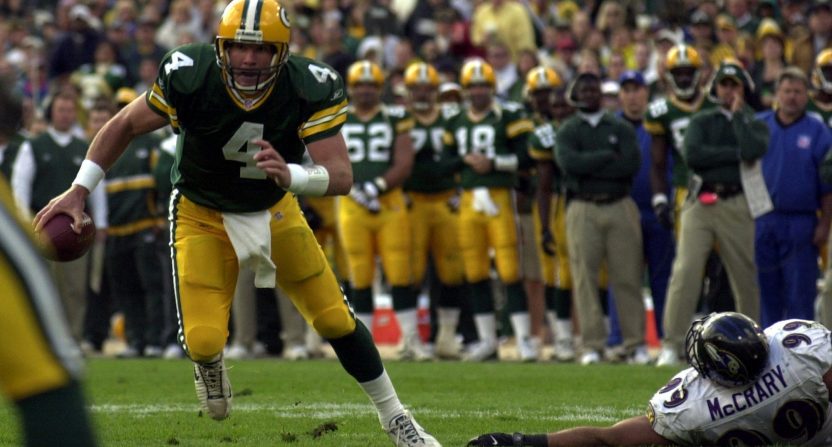 Ever since Sha’Carri Richardson was suspended from the 100 meter race at the Olympics for testing positive for THC, people who solely get their marijuana info from watching Reefer Madness were quick to spout the dangers of “the devil’s lettuce” using Richardson as an example.

One Twitter user decided to invoke Brett Favre to make their point that you don’t need pot to get over the death of a parent as Richardson said she did. In 2003, right after his father unexpectedly died, Favre threw for four touchdowns and went 22-30 for 399 yards, with the Twitter user pointing out that he didn’t need to smoke weed to do that.

Lisa Guerrero, who was the sideline reporter for that Monday night game, set the record straight and responded that while Favre didn’t pick up a blunt, he was addicted to pills and alcohol at the time in addition to refusing to cooperate in his sexual misconduct case later in his life. Guerrero probably would’ve mentioned his recent welfare fraud case if Twitter allowed more than 280 characters.

I was at that game and interviewed him for MNF seconds before this pic was taken. Great game BUT Favre was an alcoholic, abused prescription pills for years (while playing) & was fined 50K for refusing to cooperate in an investigation into his sexual misconduct. So have a seat. https://t.co/gFAkrK1LXm

While Guerrero didn’t explicitly make this point, she showed the hypocrisy of how we view certain drugs. Marijuana is seen as this evil thing mainly because it’s still illegal in some places, yet many people are addicted to alcohol when that’s not only legal but is advertised everywhere, or pain killers and prescription drugs that we can legally get from a doctor and many of those people overdose and die as a result. Favre himself said that when he made the decision to get sober, it came down to a decision to either die or flush his pills down the toilet.

If someone wants to go with the “rules are rules” argument to justify Richardson’s suspension, that’s fair. But the next time someone wants to use somebody else as an example to make a point that they’re a better person than some pot smoker, maybe Google that person before posting. Because their glass house may not be as clean as you think.