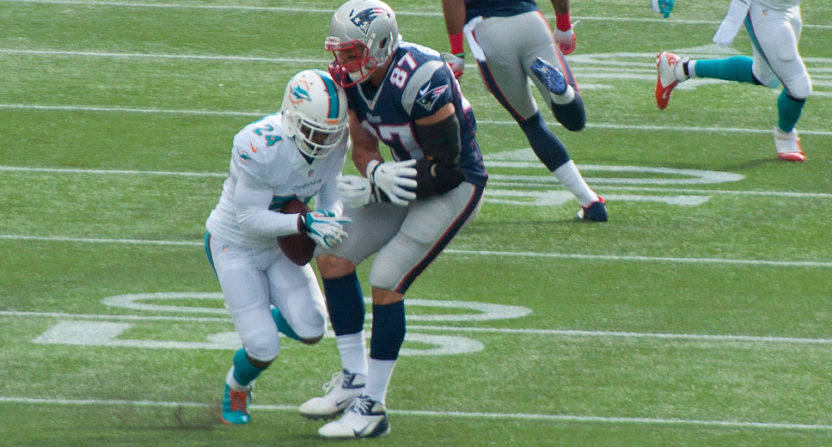 It’s pretty rare to see a former NFL player file a defamation lawsuit against a sports media outlet, and especially rare when the lawsuit relates not to anything done on the field, or to other people’s comments about the player, but to that player’s alleged actions in a separate court case.

That’s what’s going on with former NFL cornerback Dimitri Patterson (seen above picking off a 2013 pass intended for Rob Gronkowski), though, who TMZ reports has filed a defamation lawsuit against ESPN (acting as his own attorney, no less), claiming $50 million in damages from an August 2017 article about his courtroom behavior:

Former Miami Dolphins cornerback Dimitri Patterson is suing ESPN for $50 million claiming the network defamed him in a 2017 article saying he was in custody after a “courtroom escape attempt.”

The article — published on August 15, 2017 — says Patterson injured two police officers while trying to abruptly exit a Miami-Dade courthouse and avoid being arrested.

ESPN says it confirmed the info with police — noting, “a female officer suffered neck and back injuries, and a male officer injured his wrist while apprehending Patterson.”

…But, Patterson says the information is wrong — saying, “The article is false and defamatory in its overall portrayal of DP as a violent, impulsive, unstable person.”

Patterson says there is court video footage which backs up his claims.

For reference, here’s the August 2017 article. Written by then-Dolphins reporter James Walker (he left journalism to work for a CPA firm in December), it’s headlined “Dimitri Patterson in custody after courtroom escape attempt.” The key parts:

A female officer suffered neck and back injuries, and a male officer injured his wrist while apprehending Patterson. Both officers are fine, Miami-Dade police confirmed.

…When the judge ordered his arrest, Patterson attempted to bolt the courtroom and tackled two officers, police said. He could face additional charges, and he remains in custody.

It’s notable that the Miami Herald‘s Charles Rabin wrote a similar story at the time, with perhaps even a tougher title in “When former Miami Dolphin bolted from courtroom, it took five cops to take him down”:

When former Miami Dolphins cornerback Dimitri Patterson tried to bolt from a hearing in family court Tuesday, it took five Miami-Dade police officers to tackle him and get him under control.

…Patterson’s arrest report says that with a handcuff around one wrist, he tackled one cop and knocked another to the ground before three other officers joined in and took control of the situation. One cop suffered a head injury, another hurt a wrist.

Patterson, who played for the Dolphins in 2012 and 2013, was taken into custody Tuesday afternoon and charged with battery on a law enforcement officer and resisting arrest with violence.

There’s no word of if Patterson (who was on the rosters of six NFL teams between 2005-2014,  appearing in games for the Chiefs, Eagles, Browns and Dolphins) is trying similar lawsuits against other outlets that covered the case. (He was appearing in family court thanks to a prior incident; ESPN’s piece also included a line referencing their 2015 report that he was arrested on a felony child abuse charge.) But he would seem to have a tough path ahead here.

For one thing, ESPN’s piece is referencing police-provided information rather than just saying Patterson did this, and while that doesn’t necessarily block all lawsuits, it does put in some hurdles. Beyond that, as a former NFL player, there’s probably an argument that Patterson is a public figure and thus would have to prove actual malice on ESPN’s part (which would seemingly be quite difficult here), and he’d then have to prove damages (which would seemingly be tougher as an ex-athlete then as an active one). It’s also unclear where he’s getting that what looks like a just-the-facts article portrays him as “violent, impulsive and unstable.”

But we’ll see how this goes. At any rate, it’s certainly unusual to see a former athlete try this kind of legal action against ESPN, even if it may not amount to much.