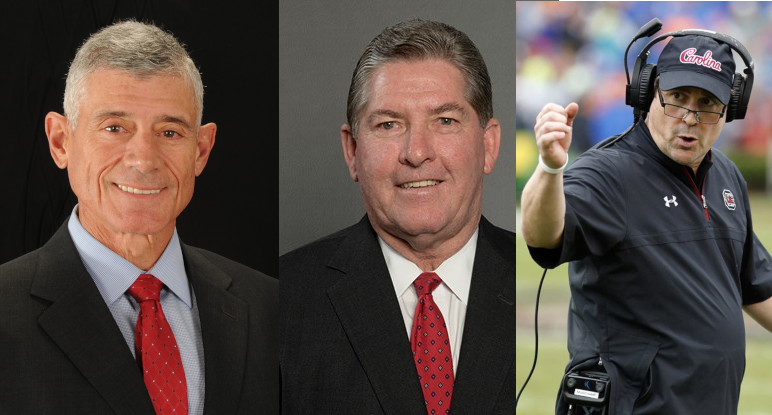 University of South Carolina president Robert Caslen (seen at left above) is having a week best summarized by Sideshow Bob stepping on rakes. Last Tuesday, Caslen told the Greenville News he was only committed to football head coach Will Muschamp (seen at right above) “through the end of the season,” and that “just like any other coach that’s out there…they’re going to do an end-of-year assessment, the athletic director does.” The problem is that Caslen and athletic director Ray Tanner (seen in the middle above) have spent the week since those initial remarks issuing contradictory statements and retractions, including one Wednesday.

Muschamp is under contract with the school through 2024 after signing a one-year extension following last season (where his team posted a 7-6 mark), and is owed $18.6 million if he’s fired after this Dec. 31, $22 million if he’s fired before then. So Caslen’s comments about potentially moving on from him (the Gamecocks are currently 4-7 and face No. 3 Clemson this week) were certainly notable, and they drew a lot of attention. They’ve also drawn a lot of varied backtracking. Here’s a timeline of how it’s played out:

Tuesday, Nov. 12 (story published on Wednesday, Nov. 13): Caslen sits down for an interview inside The Greenville News newsroom, and says the following:

“Coach Muschamp is my coach. That’s the message. He will be my coach through the end of the season,” Caslen said.

“And then, just like any other coach that’s out there, whether it’s a soccer coach, whether it’s the equestrian coach, whatever, they’re going to do an end-of-year assessment, the athletic director does. Then, we’ll see what’s up.”

“Today, I want to make it clear that Will Muschamp is our football coach and will be our coach going forward,” Tanner stated via a release from South Carolina Athletics Communications and Public Relations. “President Caslen and I are fully supportive of his leadership and his development of student-athletes on and off the field. Coach Muschamp and our staff are dedicated to the success of Gamecock football. They have built a program where our team plays for each other and for our University, and they deserve our support. While we wish the outcome of some of our games would have been different, we are excited about the future of our program.”

Saturday, Nov. 16: South Carolina loses 30-6 on the road against Texas A&M to fall to 4-7. Tanner declines to comment on his statement to reporters, but does address it on the team radio pregame show:

Tanner made the statement in light of some of the buzz and crisis surrounding the football team and university through the week, he said.

Tanner went on to praise the culture and program Muschamp has built.

“Have we won all the games we wanted to? No, we haven’t,” Tanner said. “We would love to have a couple of those back. But I just felt strongly about who he is and the type of program he runs, and I felt I needed to say something. Maybe I shouldn’t have, but that’s the way I felt at the time, and I feel strongly about who he is and the program he runs.”

Monday, Nov. 17: Caslen goes to an interview session at The Florence Morning News, and says Tanner asked Florida State about how they managed their buyout (reportedly over $18 million) for firing Willie Taggart during his second season of a six-year deal. Here are Caslen’s quotes from there:

University of South Carolina President Robert Caslen said Monday he has not asked Florida State how it came up with money to fire football coach Willie Taggart earlier this month and pay him a buyout worth a little more than $18 million.

“No, but our athletic director (Ray Tanner) has,” Caslen said during an interview session at the Morning News. “And they’ve got a whole lot more money in their athletic endowment than we do. I know that, for a fact.

“Listen, for the record, (South Carolina football coach Will Muschamp) is my coach, period. And he’ll remain my coach, just for the record. If you look at the athletic director’s statement (Saturday, supporting Muschamp before his team’s 30-6 loss to Texas A&M), that’s the same that I endorse.”

…Caslen, the university’s president since August, was then asked what Muschamp’s fate would be if Clemson wins by a large margin on Nov. 30 at Williams-Brice Stadium.

“If we’re totally imploding and no one shows up, I’d say we’ll have a discussion,” Caslen said. “But there’s no desire intended to make a change.”

In that conversation, Caslen also disputed how the Greenville News quoted him:

Caslen, on Monday, then gave his version of what happened.

“I did not say that,” Caslen said. “Those were three-minute-apart statements. I said, ‘Coach is my coach.’ Three minutes later, we had a discussion about what happens at the end of every athletic team’s season. A common practice that has gone on forever is that you assess. Frankly, I’m assessing my role: How can I as the president help his program? I have leadership responsibilities, too. Season assessment is important.

“You take THAT statement, and you take the statement, ‘He’s my coach until the end of the season,’ and then they twisted my words, and it … me off to no end. How clear can I make it? He’s my coach. He’s the university’s coach. And the statement by Ray Tanner last week is the same that I support 100 percent.”

However, after his remarks were republished and shared across social media, Caslen on Monday night issued a statement through a university spokesman denying that Tanner had any contact with FSU about the matter.

“Let me set the record straight: Athletics Director Ray Tanner did not speak with anyone at Florida State University about coaching contracts,” Caslen’s statement read.

Wednesday, Nov. 19: Caslen issues a statement about the previous statement, saying he “misinterpreted” the question from the Morning News. As Adam Kramer pointed out, this is just the latest thing in a hell of a sequence of events:

Actually, it seems like it’s even worse than that. Kramer’s right that this is the third official statement from a university official here (there have been two from Caslen and one from Tanner), but it gets even more convoluted when you factor in the newspaper remarks. Caslen’s Wednesday statement corrects his Monday statement. His Monday statement corrects his Monday remarks. His Monday remarks took exception to the portrayal of last Tuesday’s remarks by a different newspaper, and also endorsed Tanner’s Friday statement. And Tanner’s Friday statement also contradicted Caslen’s remarks from last Tuesday. So that’s a whole lot of mess.

Of course, there are always reasons to be leery of what athletic directors and presidents say about embattled coaches. In college football in particular, they have to keep some level of public support up until they actually make a move to fire the coach, or else recruiting will completely go in the tank. And that’s why statements supporting a struggling coach are often described as a “dreaded vote of confidence.”

But it’s much more rare to see something like this where a university’s president makes what appear to be several factual errors (or, at least, things he later claimed were factual errors) in the span of a week. And where he then has to issue multiple statements correcting them. And where the president and the athletic director seem to be on widely different pages as per how to proceed going forward (at least publicly).

Some of that may be because Caslen’s new to this job (he took over in August) and inherited Tanner (who’s been the South Carolina AD since 2012, and previously was their head baseball coach for the 16 years before that). But even so, the president and the AD should probably have some conversations about public messaging. Especially considering that a key part of both jobs is public messaging. At least this saga hasn’t led to anyone at South Carolina trying to dictate a newspaper’s columnist’s subjects yet, though. But it can always get worse.