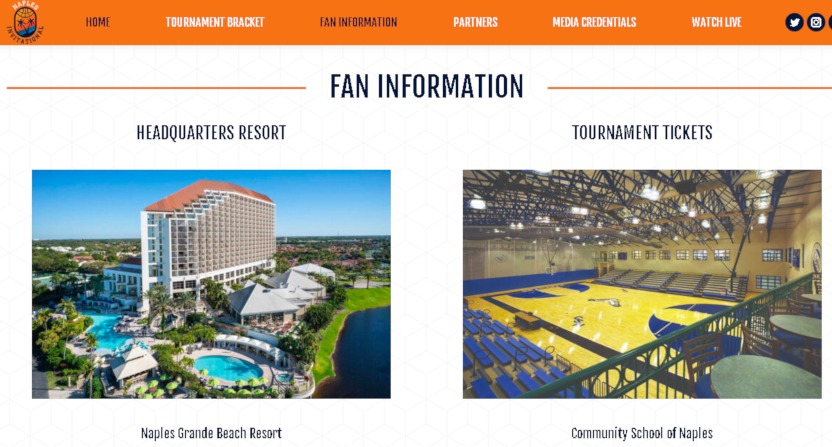 The idea of unpaid “internships” in sports media has set off plenty of debates and criticism before, and the latest one comes around the Division I men’s basketball Naples Invitational. That tournament is in its first year, and is set to be held on the campus of the Naples Community School in Naples, Florida. It features Kent State, James Madison, Wright State, George Washington, East Tennessee State, Murray State, Missouri State, and
Long Beach State, and all of its games will be broadcast on Flo Sports’ FloHoops platform. But who’s filling the analyst role on those broadcasts is apparently still up for grabs, with a tournament ad for an unpaid “broadcast intern” to do that taking criticism from Joe Vasile (whose broadcast work includes calling games for the triple-A Scranton/Wilkes-Barre RailRaiders, Bucknell football, and Bucknell women’s basketball):

If you can’t afford to pay someone to call 12 games in three days, then you shouldn’t have that position. pic.twitter.com/Nh44GXC3lH

Many others chimed in there as well with criticism:

I’ve called 12 basketball games over 3 days on several occasions, sometimes for several weeks in a row. Whenever the grind stopped, I immediately got sick every time.

It’s really amazing how vast the disparity is in how broadcasters are valued. Experience is valuable but it’s more important to get paid for your work. If networks/organizations want a broadcast they need to be willing to invest in who they’re hiring.

Especially difficult to swallow when you consider that most if not all of the teams will have radio crews there, all of whom will be compensated.

Hours later, after all that, the tournament account (actually, an overarching account for both the Naples Invitational and the associated Gulf Coast Showcase, which also took criticism for a similar posting) responded. They said their actual broadcasters are paid, their broadcast team put this out there “looking for some help…since it is such a heavy load,” and they’ll discuss alternative solutions with them.

All of our broadcasters are paid. The guys that call our games posted on there looking for some help during the tournament week since it is such a heavy load calling up to 24 games in a week. We will discuss this with them and look for better solutions.

So the approach here has changed following this criticism. And, if that account is to be believed, this was for “help” rather than the main broadcast feed (although it’s unclear what that would mean; was this really for a second analyst on broadcasts? The posting certainly wasn’t phrased that way.). But it’s worth discussing why the people involved thought this was worth trying in the first place, and why there are problems with that line of thinking.

Not all cases of “work without pay” in the media world are identical; some offer significantly helpful experience or actual course credit, and some ask for only limited contributions from the volunteers. Those cases still spark some debate, with some arguing those positions should still be paid and some defending the status quo and arguing that there’s value to limited “for-experience” positions.  But this posting in particular seems poor, and hard to defend; it looks like a huge ask in terms of time and effort with minimal tangible reward. And as Vasile went on to note, that has it at the very least stretching the definition of an “internship”:

When we talk about unreasonable financial burdens to just breaking in to broadcasting, this is it. Conservatively you’re talking about 40 hours worth of work, and several days committed to a fairly high-profile event for no pay.

The Primary Beneficiary Test Vasile references there is described on the Department of Labor’s site, and it is a useful way to think about at least a basic federal government definition of which interns should be paid minimum wage and/or overtime under the Fair Labor Standards Act. This does not apply in absolutely all cases; Major League Baseball, for example, has managed to avoid having minimum-wage standards applied to its minor leaguer players to date. And even if something does meet criteria for a paid position rather than an internship, it often takes court action to force that (and a lot of these criteria are seen one way by each side), so whoever’s supplying the broadcasters (we’d presume that’s the tournament itself, run by bd Global Sports, rather than broadcaster Flo Sports, but those details can vary event by event) necessarily going to get in legal trouble for this. But they did get a roasting on social media, as the replies to Vasile’s original tweet illustrated. Here’s one of those we didn’t post above, which is worth further discussion:

This is the very definition of what makes broadcasting a career attainable in many cases for those who begin with some form of a head-start in life.

This “internship” will have at least a dozen applicants, rest assured. https://t.co/gdNU1Rc5gI

That point from Giardino (who calls UConn Huskies games for IMG Audio) is quite notable, and it’s part of why “Well, people choose to do it” isn’t an infallible defense for these kinds of approaches. Yes, there are always some people who are willing to work for free, and who are able to do so thanks to family support, well-paying jobs elsewhere, or other factors. And that’s particularly true in sports, an area a lot of people want to work in.

But that doesn’t mean that offering jobs or “internships” for the lowest price someone will take to do the work is a good move for teams, leagues,  event organizers, or media companies. There are a lot of people who would say “Sure, I’ll be your general manager, for free!” (many of them are sports talk radio callers), but teams don’t tend to put the lowest bidder in that role, theorizing instead that they get better quality from paying a professional with experience in the area.

The same holds true for broadcasting roles and other media roles. If you don’t pay, you get those who can afford to do it for free, and the quality there usually isn’t as good. And the diversity certainly isn’t; a big part of the diversity problems in sports broadcasting and sports media start with the unpaid or low-paying “jobs” people are expected to do first. Not everyone can afford to do that.

And we would likely see a more diverse sports landscape (media and otherwise) and a higher-quality landscape if there wasn’t this assumption that everyone should do free or low-paid work to start. There’s plenty of money in most areas of sports, and most sports jobs could be decently compensated (and could find a wider candidate pool as a result) if owners and organizations took that path. At least the tournament here is now apparently changing course (but we’ll see what they land on, and how good it actually is). In any case, it’s unfortunate it took a social media shaming to get them to do so.