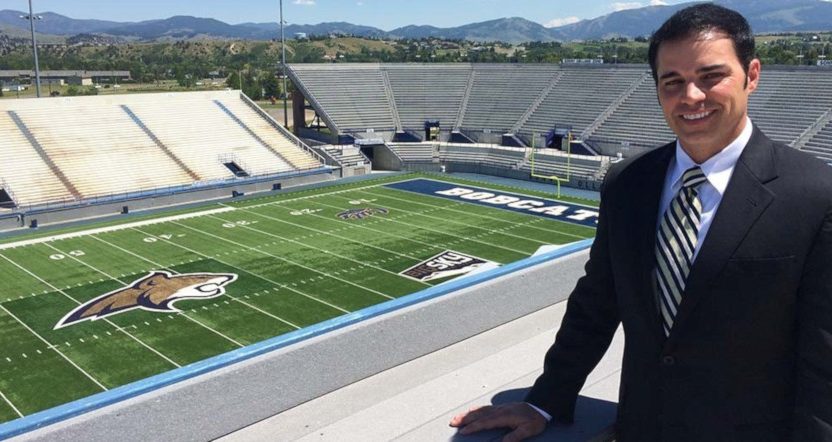 On December 29, Jay Sanderson announced on Twitter that he was resigning from his job with Learfield as the play-by-play broadcaster of the Montana State Bobcats thanks to members of his family facing “devastating health issues” in Kansas, and that he and his wife and kids were moving back home to help. But it turns out that as per reporting from Victor Flores and Jeff Welsch of the Billings Gazette and associated site 406mtsports.com,  Sanderson’s resignation also came in the middle of an investigation from the university’s Office of Institutional Equity into allegations he committed sexual misconduct and sexual harassment against a female reporter.

That reporter is Amie Just, who was with the Missoulian at the time of the allegations (which cover separate incidents in February and July). Just (who now works for the New Orleans Times-Picayune) filed a formal complaint in September that triggered this investigation, and asked to be identified in the Gazette piece. That piece details that the “final draft” report (after an investigation in September and October that included interviews with 15 witnesses, the report was submitted to MSU Title IX coordinator Emily Stark on Nov. 27; Sanderson submitted his response to it Wednesday, and a final findings of fact report may be issued as early as next week) determined that it was “more likely than not” that  Sanderson engaged in “unwanted conduct of a sexual nature which was sufficiently severe enough to limit Ms. Just’s participation (in) university programs, services, opportunities, activities and unreasonably interfered with her employment.'” The report also concluded that Sanderson sent multiple sexually harassing texts to Just, “made sexually explicit statements that cause concerns for the safety of others,” and “engaged in unwanted sexual contact with Just.”

The specific allegations in there include Just saying Sanderson touched her buttocks twice at the Big Sky football kickoff event in July 2018 (no eyewitnesses saw the contact, but several testified that they saw them in the same room and that Just told them about the incident immediately afterwards), saying Sanderson told her she had “amazing tits” (he denies that, but a witness backed that claim), saying Sanderson told her the hardest part of his job was “not f–king the players” (he denies that, but another witness said he made that comment). The report also relays a string of text messages from Sanderson to Just, which report author Victor Maxson wrote were “more likely than not” authentic:

The texts Just provided to investigators include ones Sanderson wrote to her during the early morning of Feb. 24, including:

“Come down here. We can get drunk and make bad decisions! Lol!!!”

Just responded to the last text with, “Considering I’m not interested…”

“Got someone else you’re interested in? Hmmmmmmmmmmm? I’m nosey!” Sanderson replied.

“I f–king hate you,” Just replied.

“No you don’t. You LOVE me… And you know it! Hahahaha It’s ok, I won’t tell!” Sanderson replied.

A couple hours later, at 3:19 a.m., Sanderson sent another text to Just.

“We have a shoot around at 9. If you wanna get together at like 10:30, I’d love to see more of you Lol…I’m trying SO hard not to say something inappropriately flirty. Haha. I don’t care really. Where would you want to go?”

Sanderson told the newspaper he intended the texts as “one friend ribbing another,” and he denied the other allegations:

…In a phone interview Thursday, Sanderson said Just’s allegations are “completely false — 100 percent made up.”

“I think that’s going to bear out when all is said and done. My wife knows that it’s not true, those closest to me know it’s not true, I’ve got a lot of really good people supporting me. It’s not true. I didn’t do what she said I did,” Sanderson said.

…“If somebody wants to read them as sexually suggestive that’s fine,” Sanderson said. “They were not intended that way. I viewed her as friend and it was just one friend ribbing another, me giving her a hard time. That’s it.”

He also said that the investigation played “not one bit” of a role in his departure. But it’s certainly notable that this investigation happened, and that it came to these conclusions. And Sanderson’s alleged behavior is highly inappropriate and disturbing, and behavior along those lines should be strongly condemned by media members, media organizations, and schools.