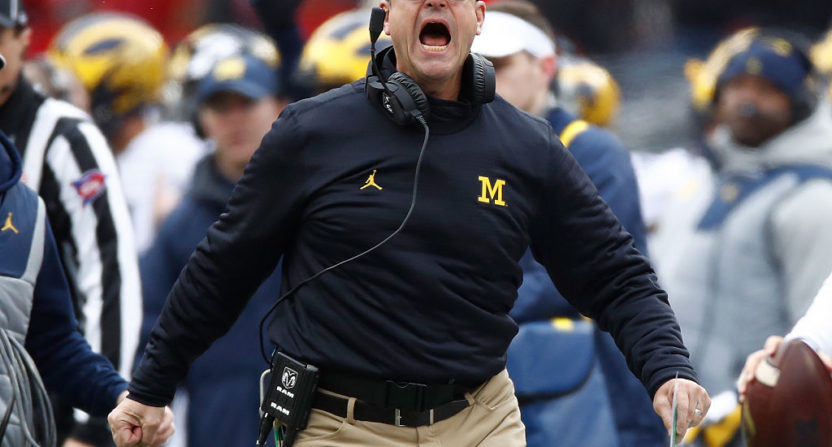 Michigan did not receive any Friday night games as part of the Big Ten’s new schedule, but that hasn’t stopped Wolverines coach Jim Harbaugh from vigorously opposing the addition of such games to college football.

During an appearance on The Rich Eisen Show, Harbaugh reiterated his strong stance against playing college football games on Fridays and stuck by the main point he’s used all along: high school programs deserve to keep the limelight for Friday nights:

“I am not for it at all. Friday night is for high school football.

“I think there’s a way [to reverse course]. Sometimes the pendulum swings one way and you do something that’s not productive for the game of football, and then has the ability to swing back the other way. I don’t know that that is set in stone, nor should it be. And I think to voice the opposition to playing college football games on Friday nights should be voiced.”

Ever since the Big Ten announced the addition of Friday night games in November, Harbaugh has publicly voiced his opposition, showing solidarity with high school football programs around the country.

Disappointed to learn Big 10 has chosen to infringe on Friday night High school Football. We should promote rather than create obstacles

The Big Ten has worked with the coaches who oppose the change. While Michigan didn’t have any Friday night games to begin with, Northwestern had two that were then moved to Saturday. But as Harbaugh and Fitzgerald have stated, it’s not simply that they don’t want to play on Fridays. There’s also a moral component here when it comes to letting big-time college football steal attention from high school kids.

And that’s a large reason why there has been so much blowback — which the Big Ten somehow didn’t see coming — from around the country. A legislator in Iowa proposed a bill to prohibit the state’s colleges from playing games on Fridays. A Nebraska preps official asked the Big Ten Network to give high schools some air time in exchange for infringing on Friday night football.

Of course, so much of this is about the television and all the money that brings to the Big Ten. As Northwestern athletic director Jim Phillips said at a conference meeting last month, via The Detroit News:

“Friday night football is beautiful,” Northwestern athletic director Jim Phillips said. “No one wants to disrupt that. We just had a wonderful session with them for two hours and had a chance to hear their perspective on it. I don’t think anybody jumped at the opportunity to create Friday night football at the college level but there was a window and it was part of our television negotiation.”

That negotiation calls for six Friday night games per season for the next six years. So we may be hearing Harbaugh et al. talking complaining about this for a while.